The centre is spread over an area of 25,000 square metre in the premises of Volkswagen Pune Plant, which the company says is an important milestone for it in India for its plan to emerge as a stronger player in the country. 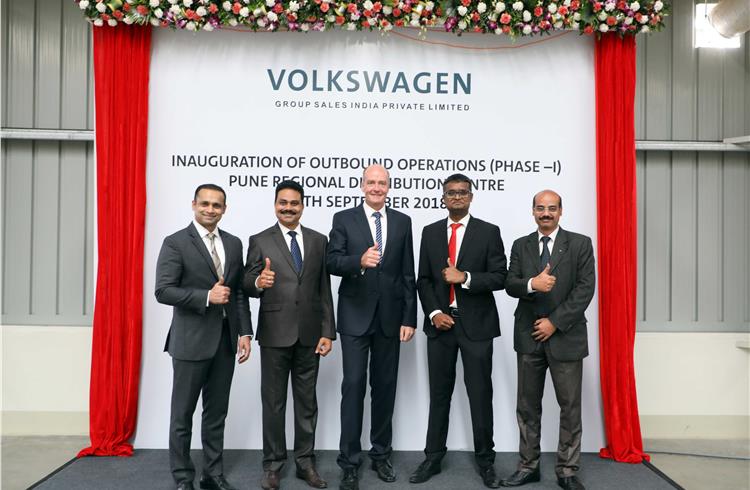 Volkswagen Group Sales India today announced its new Regional Distribution Centre (RDC) in Chakan, Pune. The centre is spread over an area of 25,000 square metre in the premises of Volkswagen Pune Plant, which the company says is an important milestone for it in India for its plan to emerge as a stronger player in the country.

The RDC is a state-of-the-art facility which has been designed in co-operation with Volkswagen AG worldwide and is compliant to the latest and highest global standards of Volkswagen. The Regional distribution centre in Chakan, Pune was inaugurated by Justin Nolte, Director Group, After Sales and Vehicle Logistics, Volkswagen. Present at the inauguration were Pavan Shetty; P Ravichandran and other senior officials of the Volkswagen Group.

Volkswagen says the during the first phase of its operation, RDC, Chakan will manage the company’s export business from India for the global market. The phase two of the operation, which starts from early next year will see it also servicing Volkswagen Group India dealerships across western part of India with one-day delivery of high quality genuine parts, ultimately ensuring higher customer satisfaction. This RDC will also be supplying parts to its parts distribution centres (PDC) located in north and south of India.

Speaking on this occasion, Nolte said, “This newly opened RDC in Maharashtra is an integral part of the network strategy under ‘Depot Network Development Project’. It is the third warehouse in India after having PDCs in Bangalore and NCR area. This centre will provide spare parts for all models available in India under the Volkswagen family starting from Volkswagen, Skoda, Audi, Porsche and Lamborghini. There is a positive customer sentiment re-emerging in the market and we pledge to provide our dealers and buyers with the best of our products and services. This inauguration today is a testament to our existing and potential customers in India. Our relationship with our customers will only strengthen from here on.”

With its strategic location, the company says the RDC in Chakan, Pune will significantly contribute in reducing current lead-time in providing genuine parts to the dealers across the states of Maharashtra, Gujarat, Rajasthan and Madhya Pradesh. This is aimed to improve Volkswagen Group after sales service offering, investing in creating world-class infrastructure and striving to remain a step ahead of the customers’ requirement by anticipating and offering them genuine parts by making it readily available.