The new XC40 SUV, retailed as a CBU, will rival the likes of the Audi Q3, BMW X1 and the Mercedes-Benz GLA. 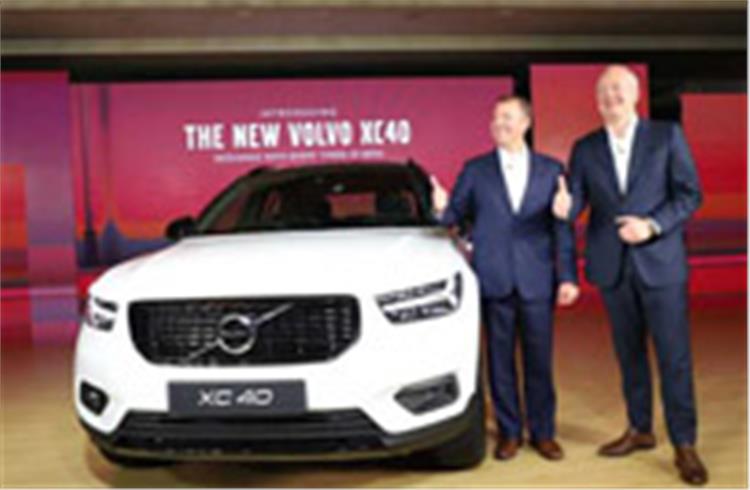 Volvo Cars India today launched its latest compact crossover, the XC40, priced at an introductory Rs 3,990,000 ex-showroom, all-India price, in its top-of-the-line R-Design trim initially. The XC40 was, earlier this year, voted the 2018 European Car of the Year.

While the front gets a butch look, the side profile gets 18-inch diamond cut alloy wheels, lending the crossover a sportier appeal. The rear end culminates into sharply styled LED tail-lamps, which complete the young and attractive styling on the crossover.

On the inside, the Volvo XC40 sports a contemporary interior layout with a unique black-and- orange combination of the seat upholstery and the floor carpeting, and gets a centrally mounted 9-inch touchscreen infotainment system as seen on its elder siblings, the XC60 and the XC90. The feature list also includes audio from Harmon Kardon and a dual-zone climate control system.

In terms of safety, the XC40, like all other Volvos, comes loaded to the gills with radar-based safety systems including Volvo’s City Safety, adaptive cruise control, lane departure warning, blind spot identification and 7 airbags.

Local assembly and sourcing strategy
While the company began its local assembly operations in India in October last year, it is right now assembling the flagship XC90 SUV and the S90 sedan at its facility in Bangalore. Volvo is now in the process of bringing its major volume grosser – the XC60 SUV – into local assembly within Q2 of this fiscal and eventually aims to assemble all models in its portfolio in India in the near future. The XC40 is expected to hit the assembly lines over the next 12 months.

On the localisation front, however, the company still considers it to be very early days at the moment. “Our current focus is on getting all our models to local assembly. Right now, we are working in this area with the XC60,” said Charles Frump, managing director, Volvo Auto India, while speaking to Autocar Professional.

Richard Snijders, vice-president, Asia Pacific Region, Volvo Cars, added, “Our localisation strategy will largely depend on our vehicle electrification roadmap for the Indian market. We will not plan local sourcing of components with the current internal combustion engine models.”

Petrol power and electrification
While the XC40 has been introduced as a diesel-only offering at the moment with a 2.0-litre, four-cylinder diesel motor, which churns out 190bhp of peak power and 400Nm of peak torque, Volvo also offers the crossover in a petrol guise in overseas markets like in Japan.

“The SUV market in India is still more skewed towards diesel. With BS VI emission norms coming in from 2020, we will have to introduce a petrol option sooner or later. With regard hybrids, the current tax structure doesn't make sense for the customer, and thus for us, to bring a hybrid version of a car to India. The government must relook the taxes, given the levels of pollution in the country”, Snijders added.

The world over, Volvo is also paying good heed towards electrification, autonomy as well as ADAS, and the company aims to sell a million electrified vehicles by 2025.

“Instead of the West, Indians are very keen on electric and autonomous vehicles and that is very exciting, as well as surprising to see. I see a lot of interest in this regard and we will eventually come up with such offerings for the Indian market as well,” said Snijders.

Undercutting the competition
With the aggressive pricing, for the XC40, Volvo Auto India has undercut the competition by a fair margin, beating the Audi Q3 by a substantial Rs 350,000 while still being a CBU (Completely Built Unit) offering, to be sourced either from Volvo's China or Thailand plants.

Interestingly, at Rs 39.90 lakh, the XC40 is cheaper than what it is sold in Europe.

According to Frump, “We wanted to create a little bit of excitement with the introductory price. We want to bring a lot of young customers to be buying the XC40,” said Frump. The company will allocate close to 700 units of the crossover for India this year, and has already received 100 bookings until now. While the premium car market is much robust in the US, China and Japan, the company gauges strong growth in the premium sub-compact SUV space in India too, which has become a 6,000 annual units market.

On a growth trajectory
Volvo Auto India, whose overall sales in CY2017 were close to the 3,000 unit mark, aims to reach the 5,000 units landmark by 2020. The XC40 is the one capable of giving it a shot in its arm, and while Volvo's growth in India stood at around 28 percent in 2017, it expects it to gain further momentum from the XC40. Expansion of the company’s dealer network is also on the cards and the company plans to open a showroom each in Rajkot, Indore, Thiruvananthapuram, Noida and Hubli over the next five months.

Also read:
Interview with Charles Frump: 'We expect the XC40 to bring in customers who will be new to luxury and to SUVs.'