As Triumph Motorcycles’ India head for five years, Sumbly is credited with setting up the operations and the network for the British bike brand across the country. 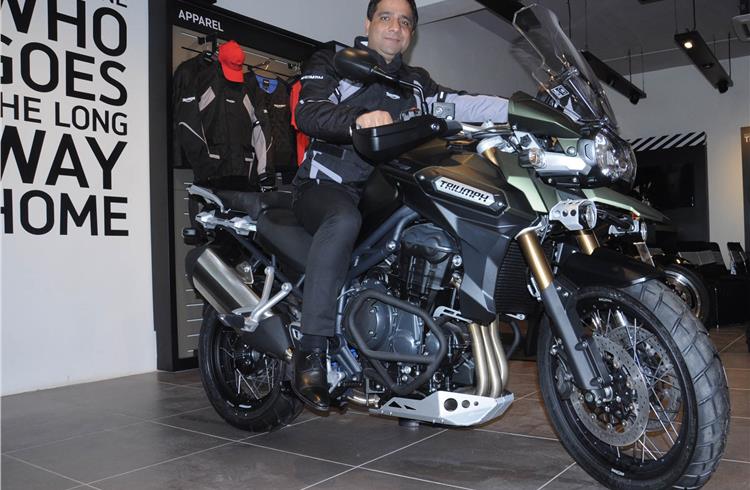 Reports suggest that Vimal Sumbly has quit from his role of managing director of Triumph Motorcycles India. Sumbly, however, is yet to confirm the development to Autocar Professional.

As the MD at Triumph Motorcycle India, he is credited with setting up the operations and the network for the British bike brand across the country during his stint of about five years.

Sumbly, who brings an experience of about 20 years in the automotive industry to the table, is known to have started his career at Tube Investments of India, a Murugappa Group company. He has also served Pune-based Bajaj Auto for almost eight years in different roles.

It can be recalled that Sumbly had joined as the MD to set up and overlook Triumph’s Indian operations around July-August 2013 after Ashish Joshi had quit from the same position in early 2012. Paul Stroud, who headed the sales and marketing position for Triumph Motorcycle globally then, looked after the Indian operations in the interim period of about 15 months.

Sumbly is credited with stabilising and providing a strong visibility and foothold to the British brand in India’s increasingly growing big bike market over the last five years.

Competing against the American big bike brand, Harley-Davidson, which had set up a solid presence in the domestic market by then, Triumph Motorcycles, thanks to its aggressive network expansion and brand promotional activities, raked in sales of about 1,300 motorcycles in its first year of sales in India. The Bonneville variants from Triumph’s modern classics portfolio stood out as the top selling motorcycles during the period.

Sumbly is also credited with aggressively pursuing the off-road motorcycling and adventure touring activities alongside promoting Triumph Motorcycle’s Tiger models amongst its existing and potential owners. These adventure-rides got legitimate traction in India with the introduction of the Triumph Tiger Training Academy, wherein the company imparted knowledge, skills and riding techniques to the participating riders for different terrains.

These activities, which started off the off-road riding culture in India, soon made Triumph Motorcycle India the largest player in the adventure and off-road motorcycle category.

As on July 28, 2018, an official communication from the company claimed that Triumph Motorcycles India now has more than 5,000 customers including over 900 owners of the Tiger motorcycles, and over 700 customers of the Street Triple.

In CY2018, Triumph Motorcycles India has grown by 14 percent YoY during the January – June period, claims the company release. The company has an existing network of 16 dealerships and service centers.

Marcelo Silva, Regional Director, Asia/Pacific - Sales & Marketing, Triumph Motorcycles, said, “We would like to thank Vimal for his valuable contribution. Triumph is the second largest premium motorcycle brand in the country with over 5,000 customers. We are confident that Shoeb, who has been part of this journey in India over the last five years, is well poised to further strengthen the brand in India.”