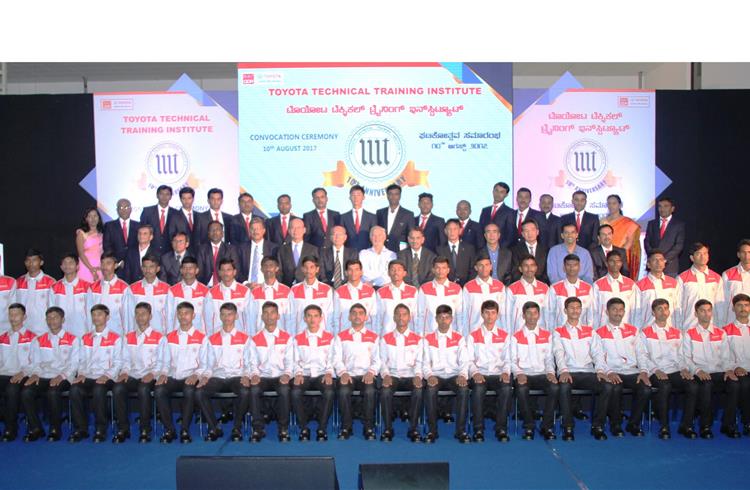 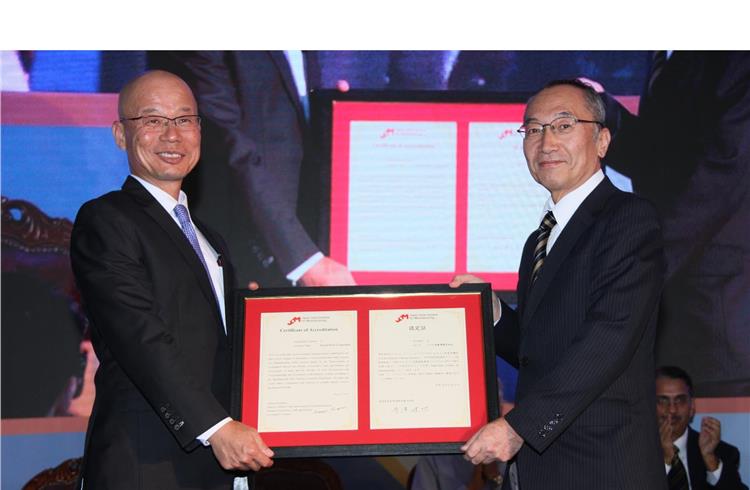 The Toyota Technical Training Institute (TTTI) today celebrated a decade of imparting world- class skills training to young talent of Karnataka from underprivileged background. Established by Toyota Kirloskar Motor in 2007 within the premises of Toyota’s manufacturing plant at Bidadi, near Bangalore, the institute confers certificates to deserving students every year.

TTTI is a dedicated three-year program that focuses on the holistic development of knowledge, skill and body and attitude. With a structure that ensures the highest standard of education, the curriculum offers a complete learning experience, along with basic subjects, recreational activities and comprehensive training on automobile assembly, automobile paint, automobile weld and mechatronics. In addition, students are given practical training by applying the world renowned ‘Toyota Production Systems’ to the various manufacturing processes at the Toyota plant in Bidadi.

Since establishment, the institute has trained 443 students who have been inducted at Toyota Kirloskar Motor, other Toyota Group companies and supplier partners. TTTI students can appear for NAC (National Apprentice Certificate) and ASDC (Automotive Skill Development Council) exams which enables them to secure government-recognised certificate/s, thereby enhancing their employment prospects.

Earlier this year, TTTI was selected for a ‘Manufacturing Skill Transfer Promotion Program’ by the government of Japan through the Japan-India Institute for Manufacturing (JIM) certification in 2017. During the convocation ceremony, Kenko Sone, minister (Economic & Development), Embassy of Japan, handed over the JIM certification to TKM’s managing director, Akito Tachibana. Announced after talks between Indian prime minister Narendra Modi and Japanese prime minister Shinzo Abe, this skill-partnership under the signed Memorandum of Cooperation  provides an opportunity to facilitate HR skill development in the manufacturing sector in India”

The JIM certification accorded to Toyota recognises the institute’s seamless efforts towards its immense contribution in upscaling the skill levels of the industry, where underprivileged young talents are trained on Toyota’s global manufacturing skills, contributing to their skill refinement making them employable.

Sharing his views, Vikram S Kirloskar, vice-chairman, Toyota Kirloskar Motor, said, “When we set out to start the Toyota Technical Training Institute in 2007, our mission was to find a solution to one of the biggest challenges faced by the manufacturing sector – increasing demand for the right set of talent pool. As we celebrate Toyota Technical Training Institute’s 10 years of skill excellence, I would like to express my appreciation to all those who have worked tirelessly towards making this institution what it is today.”

“We at Toyota are privileged to be a part of Indo-Japan Skill Collaboration under ‘Manufacturing Skill Transfer Promotion Program’, aimed towards India’s Skill Drive. Toyota Technical Training Institute has been making significant contributions to the dynamic auto manufacturing industry, by offering Toyota’s global expertise and advanced technologies to design the holistic training modules suiting the industry, which has been recognised and certified by the Japan-India Institute of Manufacturing (JIM). The TTTI students have been representing and competing in various skill contests in India and globally, winning several accolades over the years through their varied skill strengths imparted by the institute. It gives me immense pleasure to say that each student who has graduated today walks out with the best technical know-how and I wish them all a bright future.”

Congratulating the graduates, Akito Tachibana, MD, TKM, said, “Toyota as a company has always engaged in nurturing talents through enhanced skill levels. According to the findings by National Sample Survey, out of the 470 million people of working age in India, only 10% receive any kind of training or access to skilled employment opportunities.  Through Toyota Technical Training Institute, our focus has been to offer students an opportunity to acquire technical skills of Toyota’s global concepts such as ‘Monozukuri’ (skilled manufacturing), Kaizen (continuous improvement), Genchi Genbutsu (Go & See) and other best practices of Toyota. The institute also provides opportunities for the deserving individuals, developing them into good corporate citizens equipped with right attitude and spirit of challenge.

“We hope with the Manufacturing Skill Transfer Promotion Programme, more and more young talents in India will get wider global skill exposure. This partnership also creates a platform for knowledge sharing between the training institutes of both the nations.  I strongly believe that each candidate who has graduated from TTTI is flexible, focused and dedicated, with the institute making a mark and setting an example in all their attempts towards realising greater employability of youths in India.”