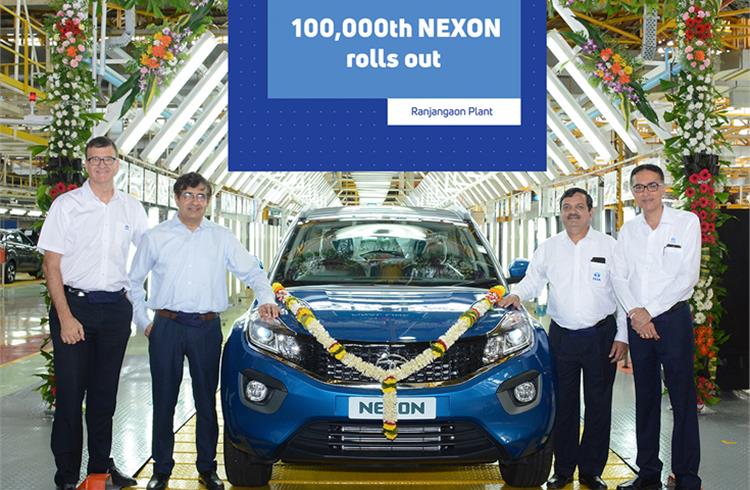 The indications that the Nexon would be a market game-changer were always there. On November 30, 2017, less than two-and-half-months since launch, the 10,000th production-ready model had rolled out.  Then on February 27, 2018, the 25,000th Nexon exited the Pune factory.

Making the con-Nexon with the compact SUV market
For Tata Motors, which is aggressively driving its Turnaround 2.0 growth strategy, the Nexon has proved to be the weapon to take on the competition and give a new charge to its UV and PV sales.

The Nexon is offered with a 110hp, 1.2-litre turbo-petrol as well as a 110hp, 1.5-litre diesel engine. Both engines get the option of either a 6-speed manual or a 6-speed AMT gearbox.

The Tata Nexon is priced from Rs 658,000-10.30 lakh (ex-showroom, Delhi) and it rivals the likes of the Maruti Suzuki Vitara Brezza, the Mahindra XUV300, Ford EcoSport and the recently launched Hyundai Venue.

Buyers shift from diesel to petrol
As per Autocar Professional’s estimates, since the Nexon’s launch close to two years ago, the compact SUV has sold a total of 95,207 units till end-June 2019 comprising 50,031 diesel variants and 45,176 petrol variants, making for an overall 53:47 percent fuel-wise split in favour of diesel when it comes to total units sold till now.

However, a closer look at the data reveals that the consumer buying pattern of the Nexon mirrors the consumer shift in favour of petrol, as it does for the rest of the passenger vehicle industry. In FY2018, the diesel-petrol buying ratio for the Nexon was 62:37 percent; this changed to 49:51 percent in FY2019, and to 38:62 percent in Q1 FY2020.

The Nexon, Tata Motors’ first compact SUV, has been a game-changer for the company, helping it energise its fortunes in the passenger vehicle and SUV segments, along with other Tata cars. Thanks to the Nexon, Tata Motors’ market share in the UV segment has risen to 8.53 percent at present (Q1 FY2020). The company’s share of the UV pie has been growing – in FY2018 it was 5.63 percent and grew to 8.37 percent in FY2019. Even in current depressed market conditions, Tata has marginally increased its UV market share.

With growing safety awareness amongst vehicle buyers in India, the Nexon clearly has benefited from its robust safety standards and stands out as one of the safer and affordable cars in India.