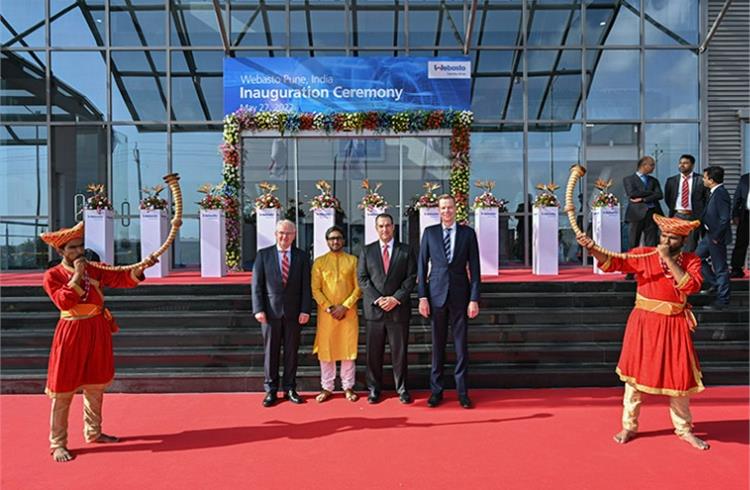 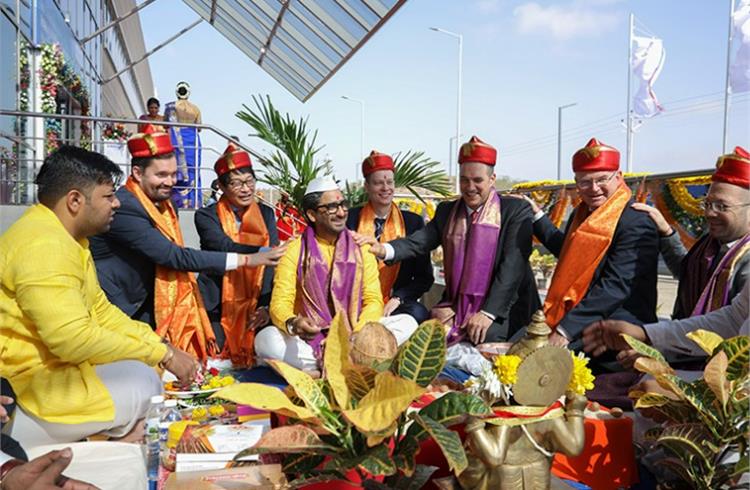 Traditional puja ceremony at the inauguration of the new Webasto plant in Pune. 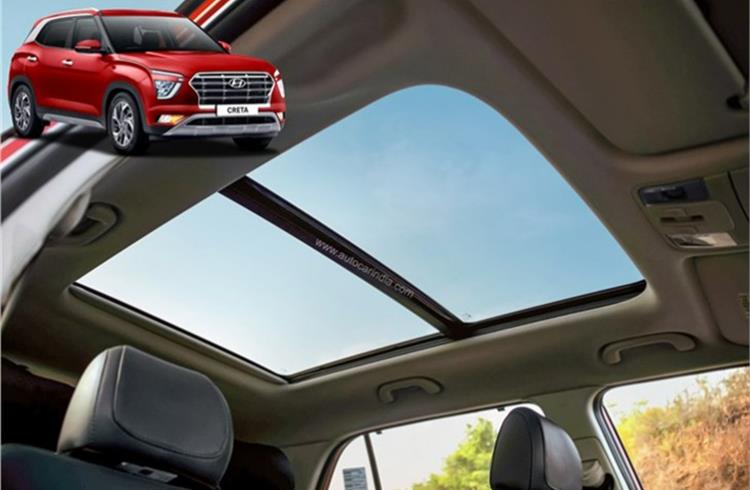 Hyundai Motor India offers a sunroof in no less than seven models – i20, i20 N Line, Venue, Creta, Alcazar, Tucson, Kona EV – and will offer one in the upcoming all-electric Ioniq 5 crossover as well. 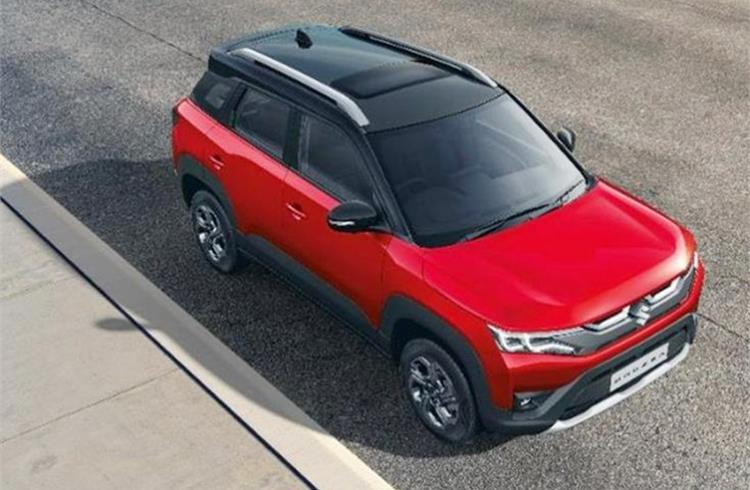 2022 Maruti Brezza is the first product from the carmaker to be fitted with a sunroof. 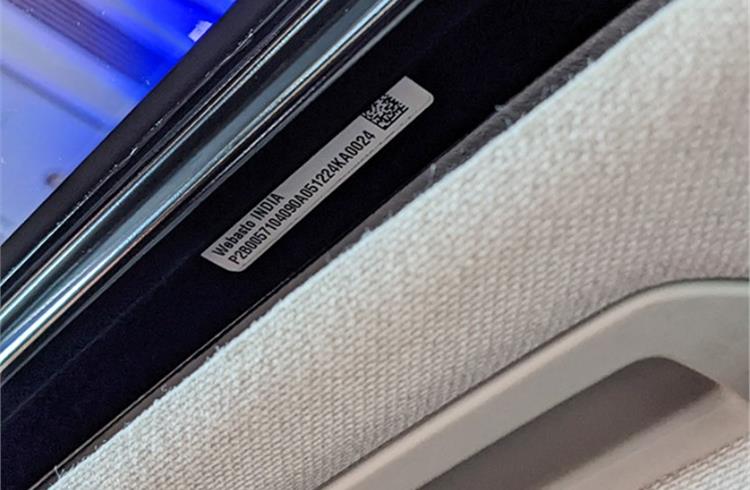 The new Brezza has a Webasto-manufactured electric sunroof. Maruti Suzuki now plans to introduce a panoramic sunroof in its upcoming midsize SUV, slated for launch in end-July 2022.

When India's largest carmaker and passenger vehicle market leader installs a sunroof for the first time ever, it clear that the trend is here to stay. The recently launched 2022 Maruti Brezza features an electric sunroof from market leader Webasto India.

To meet the surging demand for roof systems for cars in Asia-Pacific, Webasto has expanded its capacities in the region in recent months. India is among the fastest-growing markets for this product category.

"South Korea, India and Japan are dynamic growth markets with great potential for both our core business and our electromobility solutions. As a basic principle we produce in the market for the market, so given the need for our products in these countries, it quickly became clear that we would strengthen our local presence. Broadening our footprint in Asia beyond China, our largest single market to date, is a strategically important decision for the future of Webasto," said Dr. Holger Engelmann, Chairman of the Management Board of Webasto SE.

In total, Webasto is investing more than 130 million euros (Rs 1,072 crore) at Asian locations. In Pune, India, Webasto has built a larger local production site for roof systems as the original buildings had become too small.

On the ground of its plant in Hiroshima (Japan), where roofs have been manufactured for the Japanese market since the late 1970s, Webasto is expanding with a second factory building. In addition, within a year, a state-of-the-art new plant to produce batteries for fully electric passenger cars was constructed south of Seoul in Dangjin (South Korea). Series production at all three plants has already started successfully.

Driving with an openable roof a growing trend in India
In recent years, the sunroof has become a very popular vehicle equipment feature in India, and demand is steadily growing. The marked rise in demand for passenger vehicles with sunroofs is a result of the shift in consumer demand for a higher level of comfort and convenience features.

The sunroof, once a feature seen only in top-end variants of luxury cars, has now percolated to the mass market. In fact, the sunroof, now a standard fitment in many popular models, is fast becoming one of the drivers of purchase decisions.

International car manufacturers with Indian subsidiaries as well as local OEMs are increasingly looking for partners to produce openable roof systems within the country. Webasto has been in the Indian market for around 10 years and has so far supplied smaller volumes of roofs from its former site in Pune and from a plant in South Korea to India. 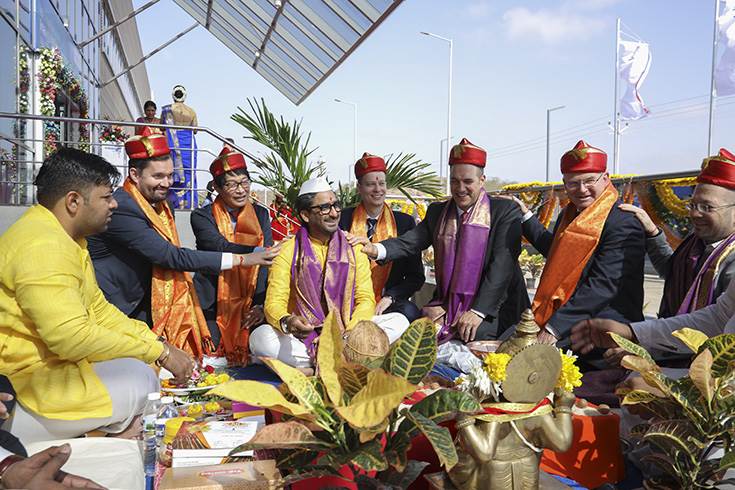 Traditional puja ceremony at the inauguration of the new Webasto site in Pune.

After receiving several large-volume orders, the company decided to build a new, significantly larger plant ten kilometres from its previous location. The ground-breaking ceremony for the 18,000-square-metre site in Phulgaon (Pune) took place in early January 2021.

In addition to a production capacity for 400,000 roofs per year, the building also houses a validation area. Here, the quality and functionality of roof systems are tested under extreme climatic conditions, among other things.

Due to the high demand, a second plant for the production of roof systems for the Indian market is already being planned near the coast in the southwest of the country. In order to be able to adapt its products even better to the future market requirements in the region, Webasto has also set up a development team in Pune in recent months. In total, Webasto is investing around 40 million euros (Rs 330 crore) in India by 2025.

37% of Hyundai PV sales in India are with a sunroof
Even though Hyundai wasn’t the first company to introduce a sunroof in mass market cars, due to its sheer sales volume, the Korean carmaker has played an important role in popularising this feature in India. First made available with hatchbacks like the i10 and i20 back in 2008-'09, the company, as of today, offers a sunroof in no less than seven models – i20, i20 N Line, Venue, Creta, Alcazar, Tucson, Kona EV – and will offer one in the upcoming all-electric Ioniq 5 crossover.

“Forty-one percent of our buyers are now less than 35 years of age,” said Tarun Garg, director of Sales, Marketing and Service, Hyundai Motor India, in an interview with Autocar India. “Customers, especially youngsters, are preferring more and more features. Sunroof has become a very critical feature as far as Hyundai cars are concerned and 37 percent of all Hyundai sales are with sunroof.”

Interestingly, of all the connected car and voice control features, Garg said the ‘Open Sunroof’ command is the most used, along with switching on the AC.

Maruti’s sunroof innings begins with the new Brezza
Maruti Suzuki India has recently made the shift into offering a sunroof for the first time ever in India in its latest offering – the second-generation Brezza compact SUV. 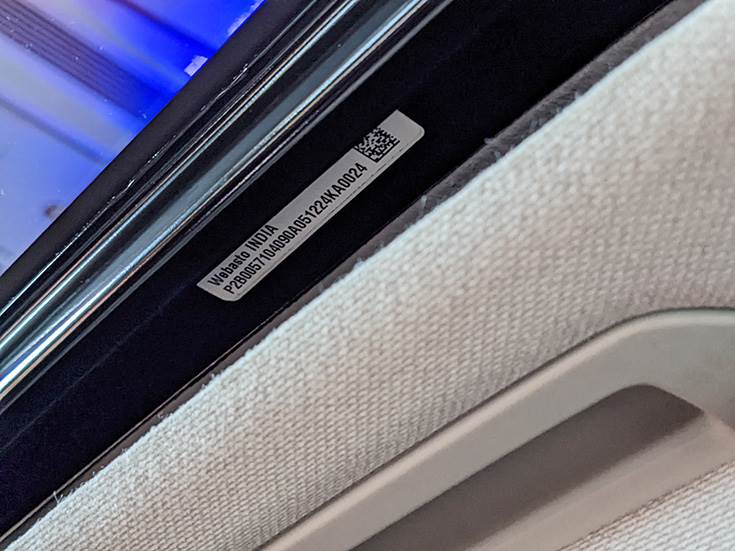 The new Brezza has a Webasto-manufactured electric sunroof. Maruti Suzuki now plans to introduce a panoramic sunroof in its upcoming midsize SUV, slated for launch in end-July 2022.

The single-pane electric sunroof in the new Brezza is being procured from Webasto India, and MSIL is targeting average monthly volumes of the crossover to be in the range of 10,000 units, with the heavily-equipped top variants likely to command a higher share. The carmaker is set to take the sunroof game forward by switching to a panoramic sunroof in its upcoming midsize SUV, slated to be launched later this month.

Webasto also eyeing new markets in Southeast Asia
"With the new sites and the expanded plant, Webasto is now much more broadly positioned in Asia than before. In India, Japan and South Korea, we expect double-digit growth rates and a rapid payback on our investments in the coming years," says Chairman Engelmann, adding: "Furthermore, our roof systems are also available in Southeast Asia. We are currently looking into setting up an additional production site for this region in either Thailand or Indonesia."