Skoda Vision IN concept offers glimpse of production-spec midsize SUV to be launched next year; first model to be built on the VW Group’s India-specific MQB A0 IN platform. 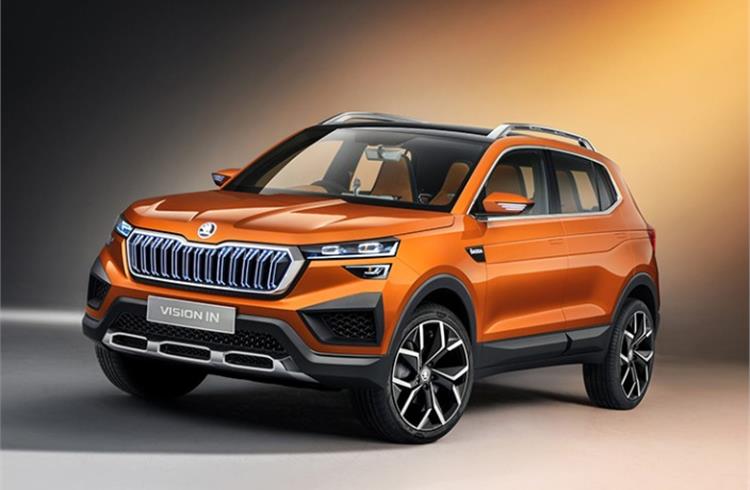 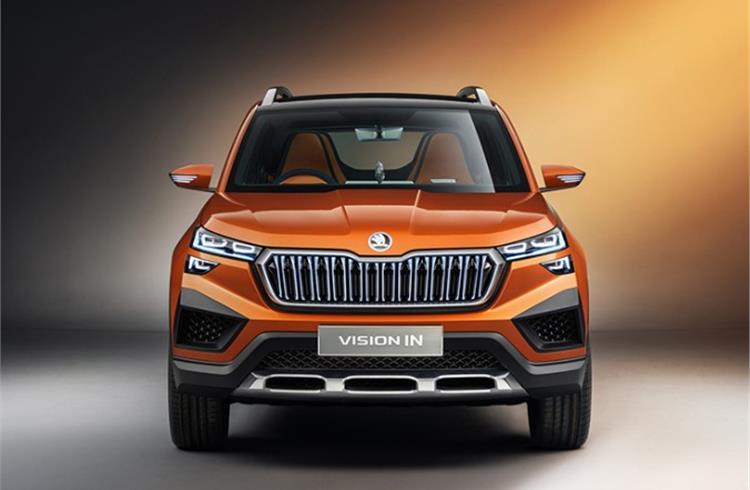 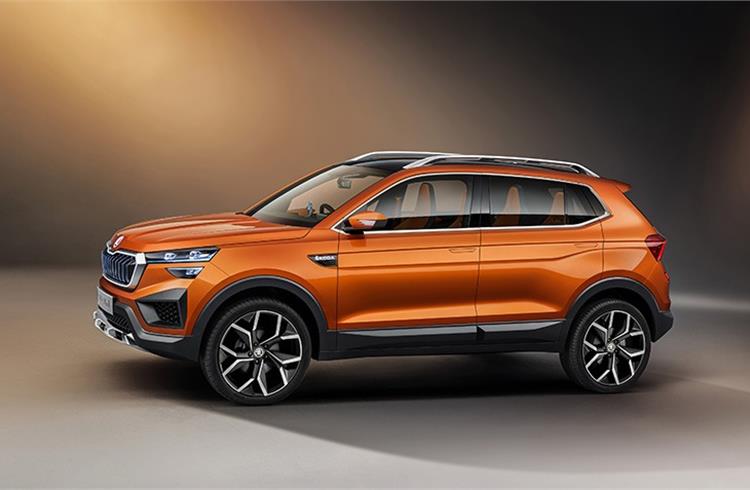 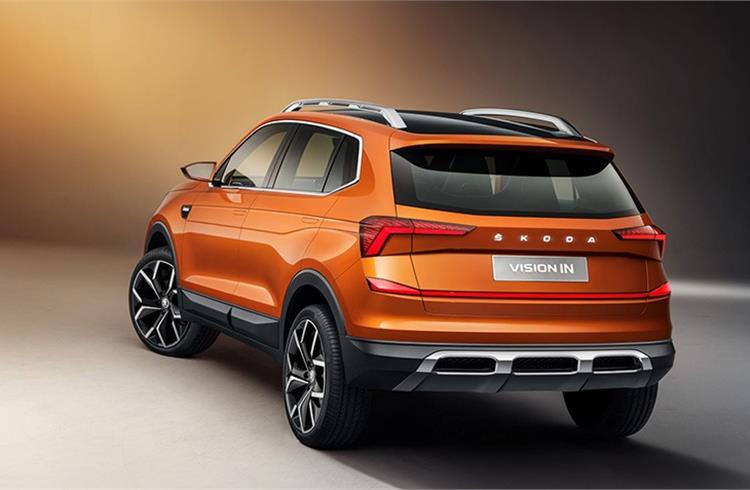 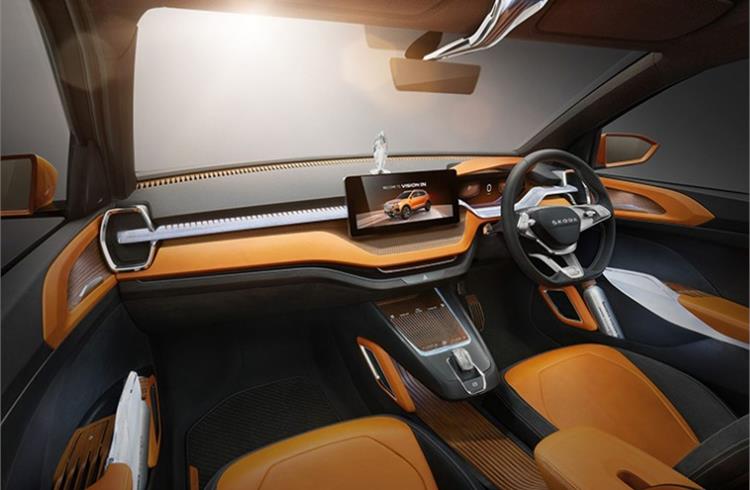 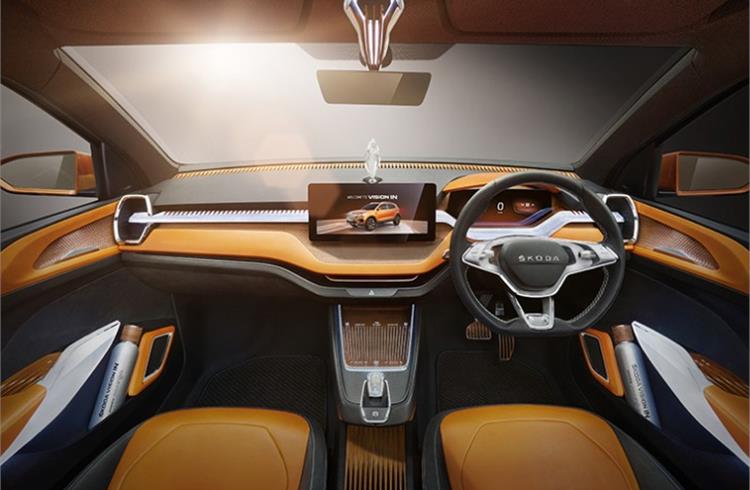 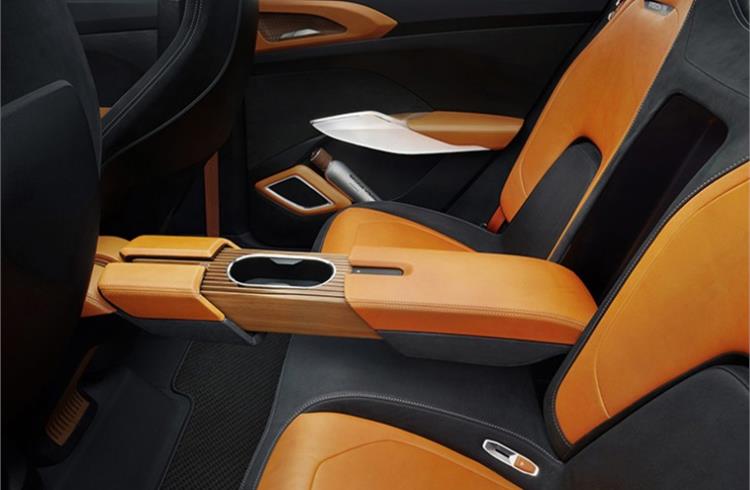 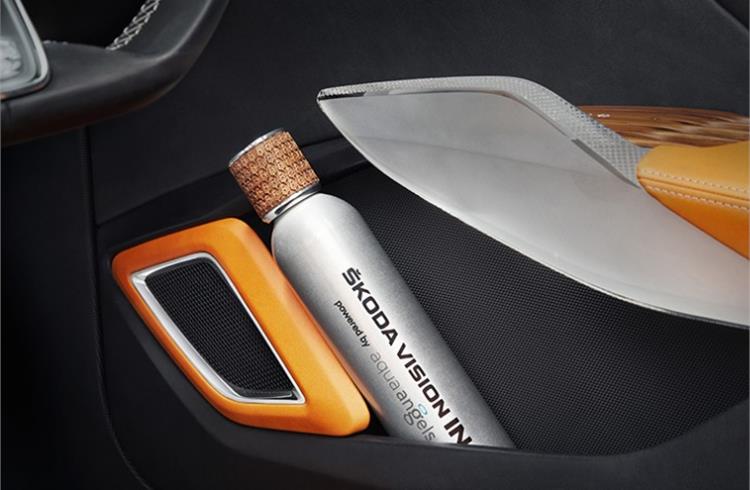 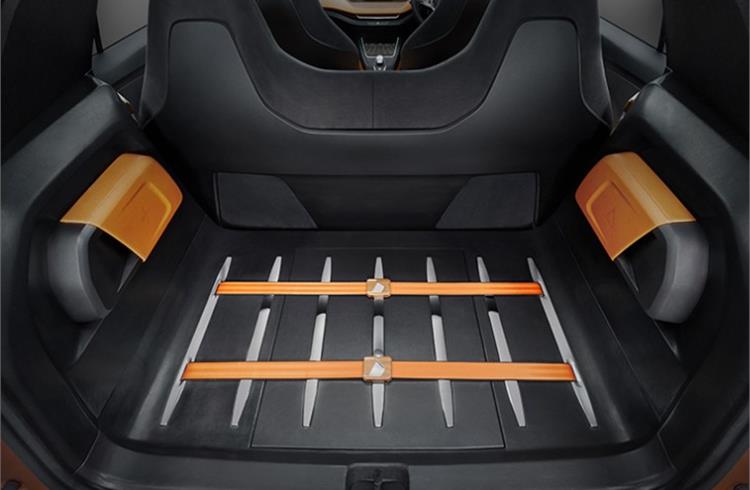 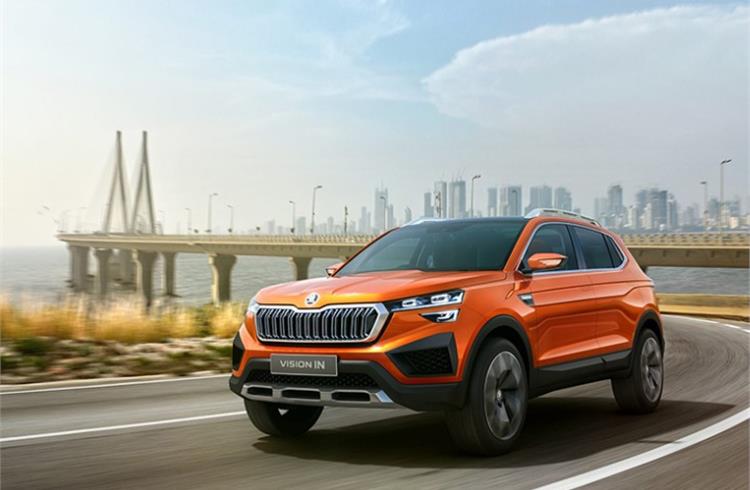 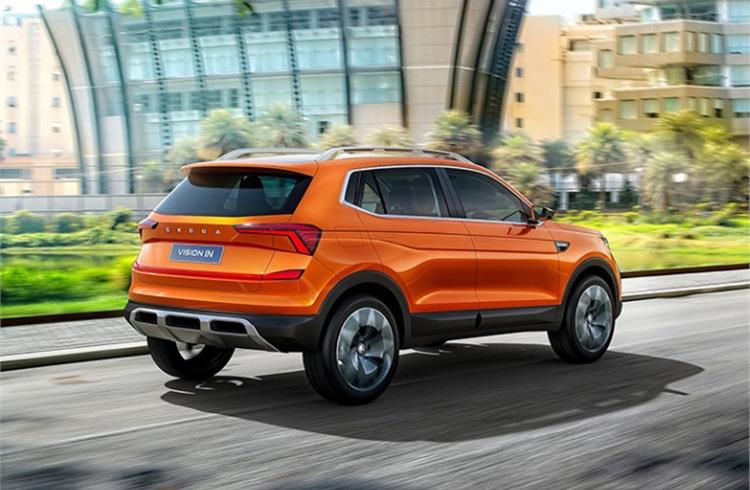 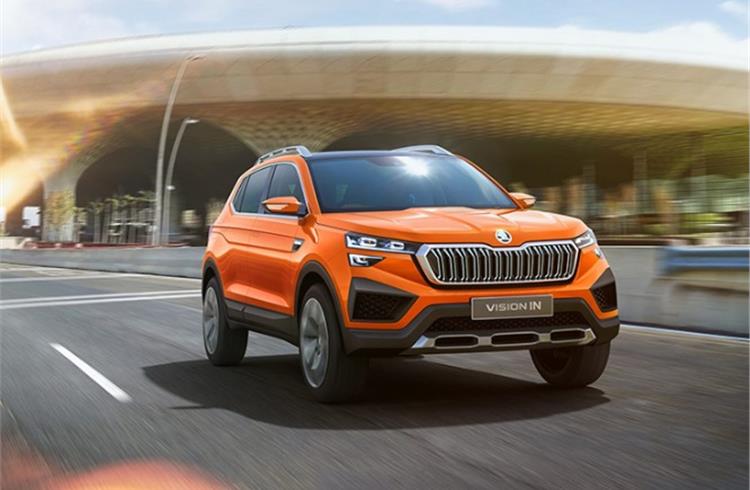 After a quiet few years in India, the Volkswagen Group – Volkswagen and Skoda, in particular – are ready to make a big splash in the market. One of the most important among several unveils at today’s Skoda Auto Volkswagen India Media Night in New Delhi was that of the Skoda Vision IN concept, which made its world premiere in New Delhi. The Vision IN previews a midsize SUV to rival the Hyundai Creta and Kia Seltos here and mark Skoda’s entry into one of the Indian market's most lucrative (and competitive) segments.

While the Vision IN is a Skoda product, it is of prime importance to the VW Group. The production-spec model will be the first to be launched under the Group’s India 2.0 project and also be the first model to be built on the company’s brand-new, tailored-for-India, MQB A0 IN platform.

Handsome design
As the design sketches had previously hinted, the Skoda Vision IN concept provides a glimpse of a handsome, bold-looking SUV. The Skoda Vision IN’s face echoes the design of the Kamiq sold abroad, but it has a bolder, more upright nose, with the trademark chrome-embellished Skoda grille flanked by split projector headlights and the angular bumper featuring large air intakes and a three-slot skid plate. Other notable design elements include plastic cladding all around, prominent roof rails and large 19-inch alloy wheels befitting a concept. 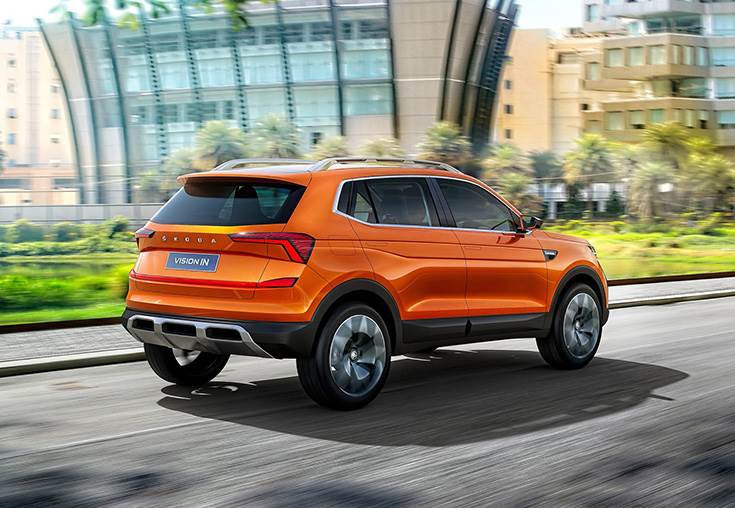 At the rear, too, the Skoda Vision IN has a lot in common with the Skoda Kamiq SUV in terms of design, with its crystal-like LED tail-lights. The concept also sports an additional light strip that spans the width of the SUV as well as a three-slot skid plate, similar to the one at the front. Size-wise, the Skoda Vision IN SUV concept measures in at 4.26m in length – roughly the same length as the outgoing Hyundai Creta.

The inside story
As for the Skoda Vision IN’s interior, it features a number of elements that are now becoming common across all new Skoda models. The layered dashboard is bound to draw a lot of attention. A thin chrome bar spans the length of the dash and connects the large, chrome-lined vents at each end, accentuating them. Skoda has also used orange liberally to liven up things on the inside – parts of the dash, door panels, centre console and front armrest finished in orange. 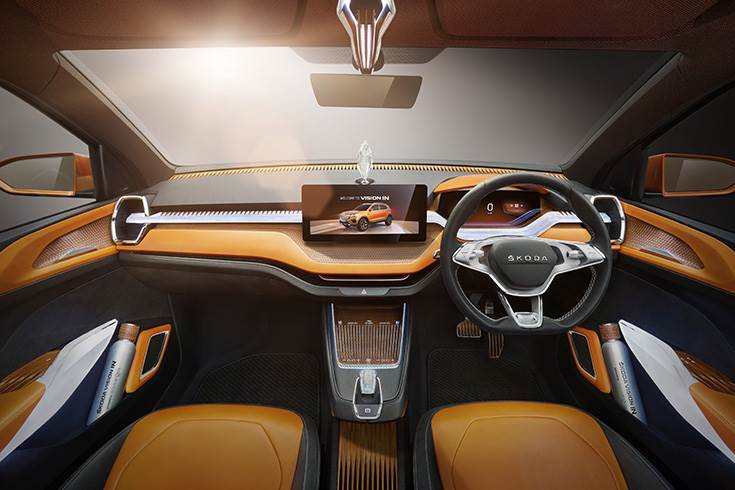 A large, free-standing 12.3-inch touch-screen infotainment system takes centre-stage, right next to the Virtual Cockpit digital instrumentation. An interesting addition is what Skoda calls a ‘crystalline element’ placed atop the dash. There are also knurled scroll wheels placed on the flat-bottom, three-spoke steering wheel, along with buttons for phone controls, voice commands (Skoda calls it a 'digital assistant'), lane assist and cruise control. There is a small gear lever for the automatic transmission positioned centrally on the compact centre console.

Features expected on the production version of the Skoda Vision IN include automatic climate control, a panoramic sunroof, rear AC vents, USB charging ports at the rear, drive modes, ambient lighting and more. We can also tell you that the production-spec Skoda Vision IN SUV will have a 2,651mm-long wheelbase, and plenty of space for rear-seat passengers.

Powering the production-spec Skoda Vision IN will be a 150hp, 1.5-litre, four-cylinder turbo-petrol engine. There won't be any diesel engine option, but a CNG variant could be on the cards.

Commenting on the tailored-for-India Vision IN concept, Skoda CEO Bernhard Maier. said: "India is one of the most exciting and most promising growth markets for Volkswagen Group. A year-and-a half ago, we set the course to help write this story of growth with our India 2.0 project. Together with the Volkswagen brand, we are seeking a combined market share of five per cent by 2025, depending on market and segment development. For Skoda, India would thus become one of the five largest markets in the world. The first models being developed as part of the India 2.0 project are on the home stretch, and – by unveiling the Skoda Vision In – we are giving a concrete preview of the first production car."

Gurpratap Boparai, managing director of Skoda Auto Volkswagen India, said: "For us, localisation is the key to success and by opening our Technology Centre in Pune, we have created the necessary conditions for this. In the localised MQB-A0-IN variant of the MQB, we now also have the technical prerequisite to offer state-of-the-art, attractive vehicles: they fulfil the latest safety and emission requirements for the Indian market, are in line with our customers’ tastes and are tailored to their needs."

Launch around April-June 2021
It has previously been confirmed that the production-spec Skoda Vision IN SUV’s India launch will take place sometime between April-June 2021, well before Volkswagen launches its own MQB A0 IN-based Taigun SUV. By the time it arrives in showrooms, the Skoda Vision IN’s list of rivals will include its cousin from the VW stable, the next-gen Hyundai Creta (set to be showcased at Auto Expo 2020 on February 6), the Kia Seltos, MG Hector, the all-new Mahindra XUV500 and Maruti Suzuki’s upcoming midsize SUV.

The brand has also announced that it plans to have 200 sales and service touchpoints across 150 Indian cities by 2023.