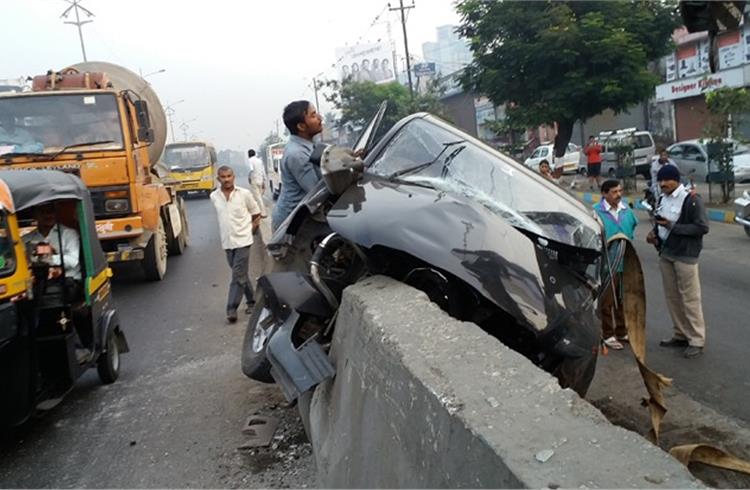 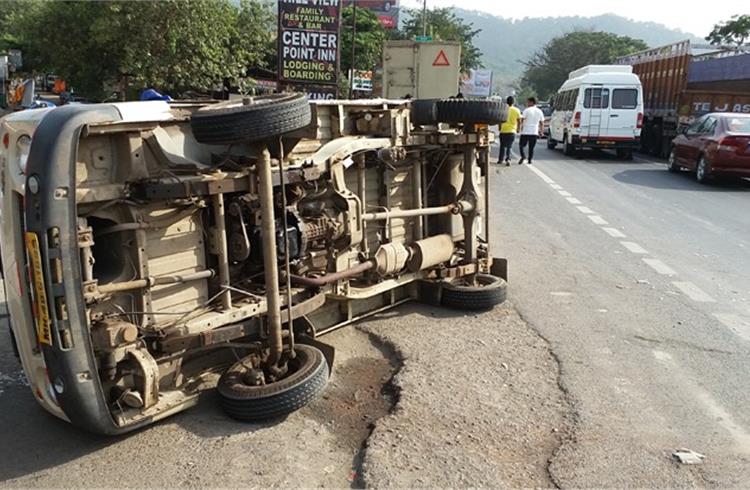 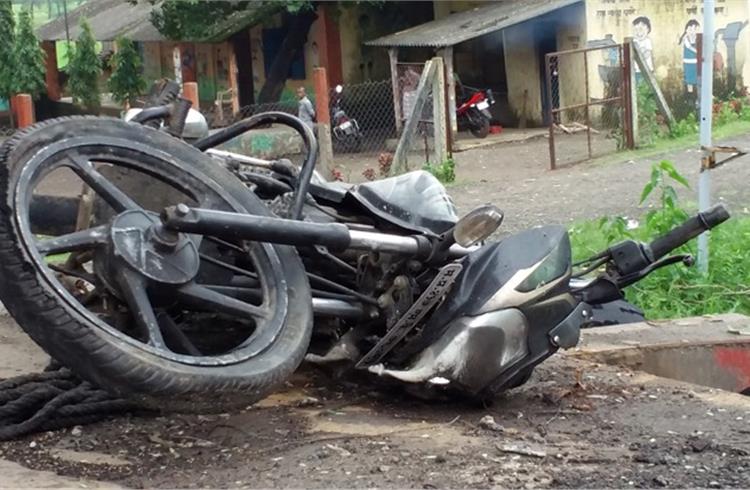 Among the top three vulnerable users of the total number of road crash deaths in India, 36.5 percent of individuals were two-wheeler users, followed by car, taxi, vans and LMVs (16.6%) and pedestrians (15%). 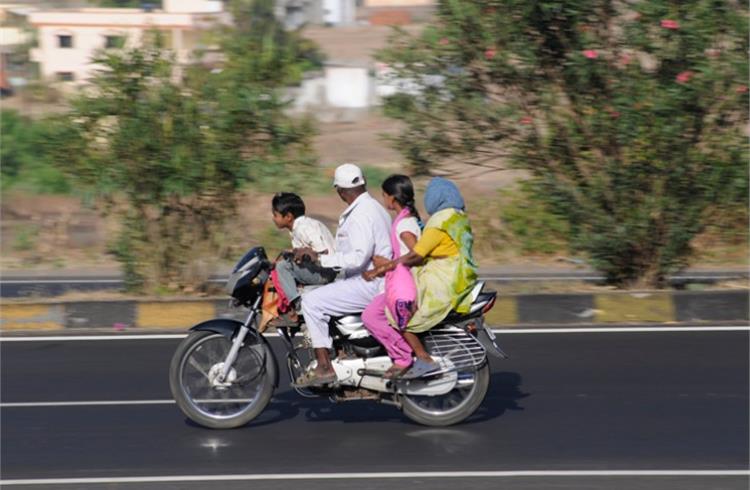 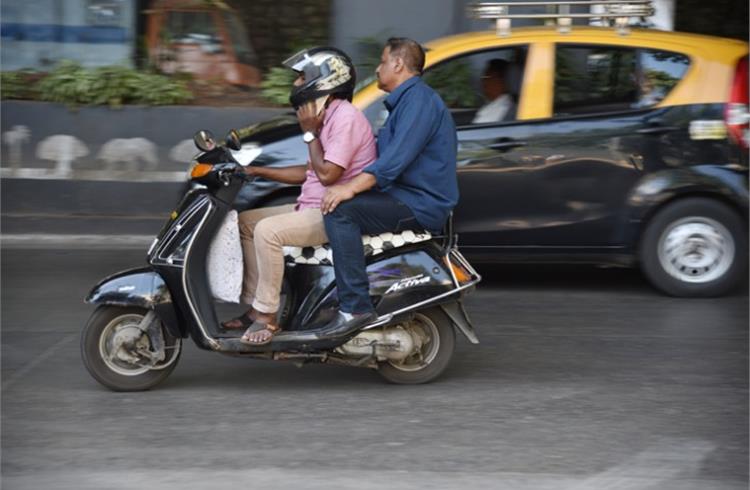 Drunken driving/ consumption of alcohol and drugs, jumping of red light and use of mobile phones (pictured here) together accounted for 6.5% of total accidents and 6.2% of total deaths. 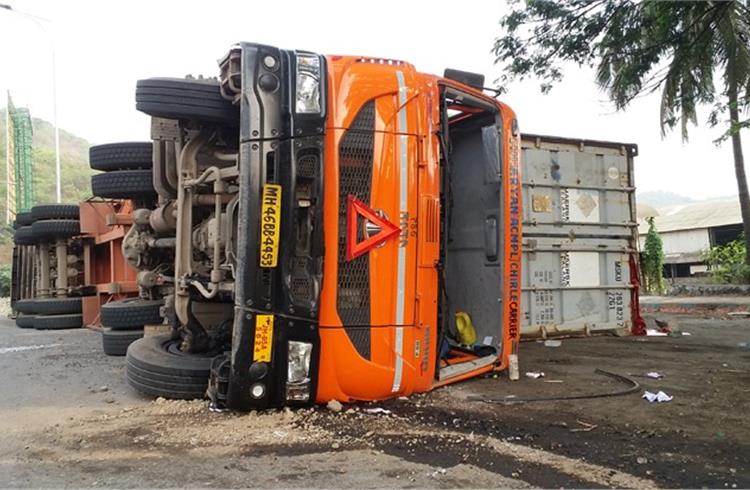 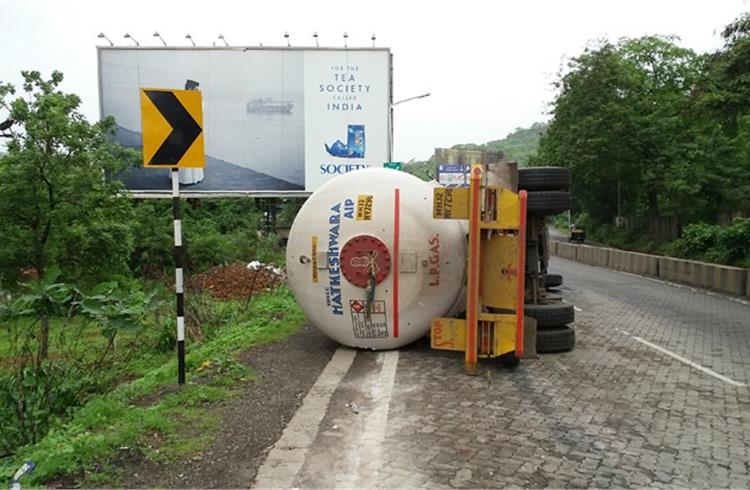 National Highways, which comprise 1.94 percent of India's total road network, accounted for 30.2 percent of total road accidents and 35.7 percent of deaths in 2018. 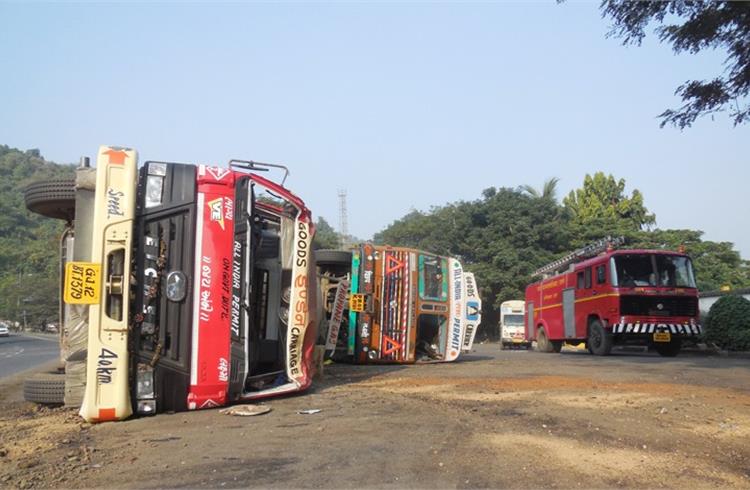 Tamil Nadu recorded the highest number of road accidents (63, 920) in 2018 while the highest numbers reported as killed in 2018 were in Uttar Pradesh (22,256). Both states, unfortunately, have maintained their 'lead' in terms of number of accidents and persons killed since 2017 despite the several road safety initiatives taken by both the Central and State governments. 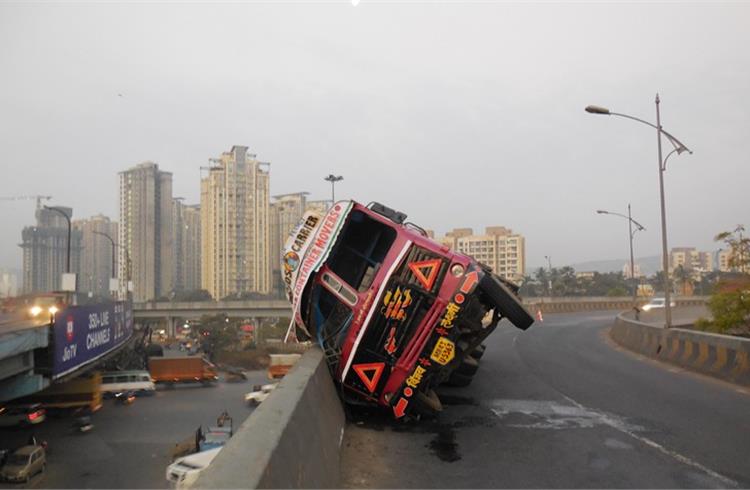 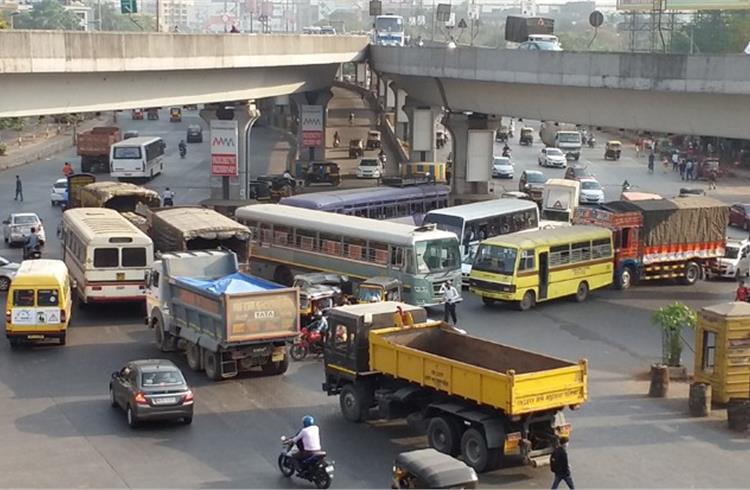 Pedestrians and cyclists are considered to be the most vulnerable road user category. This is a traffic scene shot in Thane, Mumbai 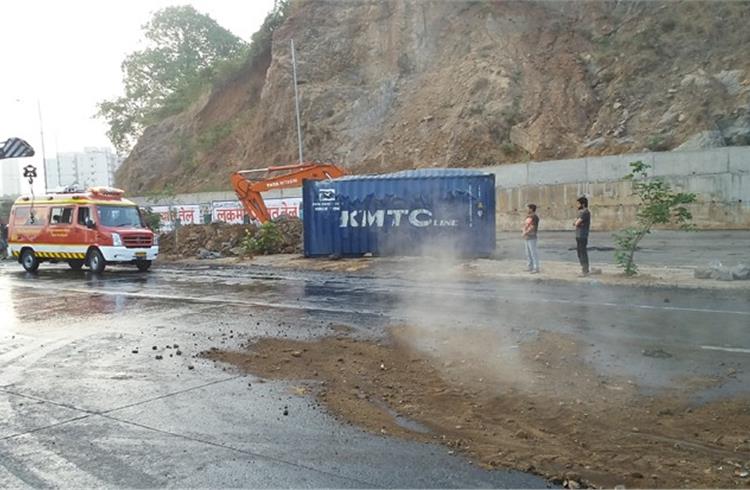 The MoRTH report says the largest increase in the number of accidents, those killed and those injured took place in the curved road, bridges and straight road category.

The official statistics on road accidents in India for 2018 are out and they continue to reveal the sorry state of vehicular safety. The latest data shows an upward trend – both in terms of accidents and the number of lives lost in the country. The data for 2018 indicates that the country witnessed 467,044 accidents (+0.46%), which claimed 151,417 lives (+2.37%) and injured 469,418 (-0.33%) individuals, which translates into 415 people not returning home each day. It also means that 17 lives were lost and 53 injured every hour across India.

What’s worrying is that despite efforts by industry stakeholders to disseminate safety-related information and create more awareness among motorists and people at large, the overall 2018 road crash statistics have actually gone up over those in 2017, a year in which road accidents and fatalities had reduced over 2016. 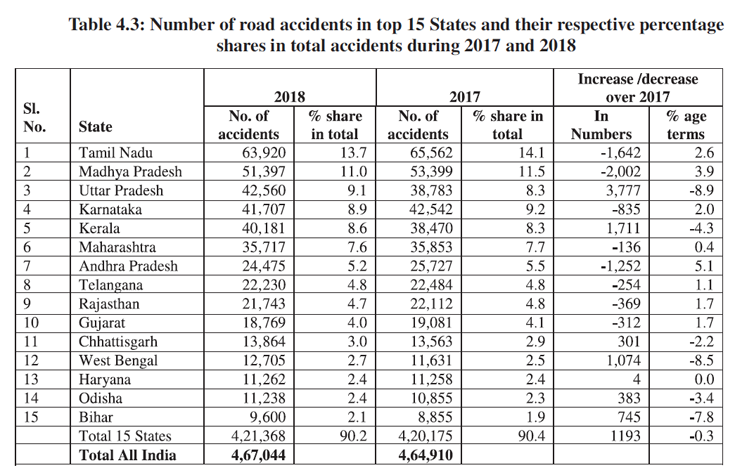 The ‘Road Accidents in India 2018’ report, released by the Ministry of Road Transport & Highways,  further reveals that the share of 'minor injuries' accounts for the largest share of about 36 percent, followed by 'fatal accidents' of around 30 percent, while 'grievous injuries' account for another 27 percent. The share of non-injury accidents is 7 percent and that 'grievous injury accidents' make up 27 percent of the total accidents. MoRTH says the report underlines the need for provision of good Samaritan laws and provision of free health care during the golden hour to save lives which has now been made a part of the Motor Vehicle Amendment Act 2019.

Overspeeding remains No. 1 reason for road accidents
In a country where OEMs continue to lure customers with 'kitna deti hain' (fuel efficiency) factor, there is a contradiction with the number of fatalities due to overspeeding continues to be the main cause for road accidents, thus putting a finger on the driving style of the bulk of motorists across the country. In fact, 66.5 percent of the total accidents, accounting for 64.4 percent of total lives lost and 67.4 percent of injures, were due to overspeeding alone. 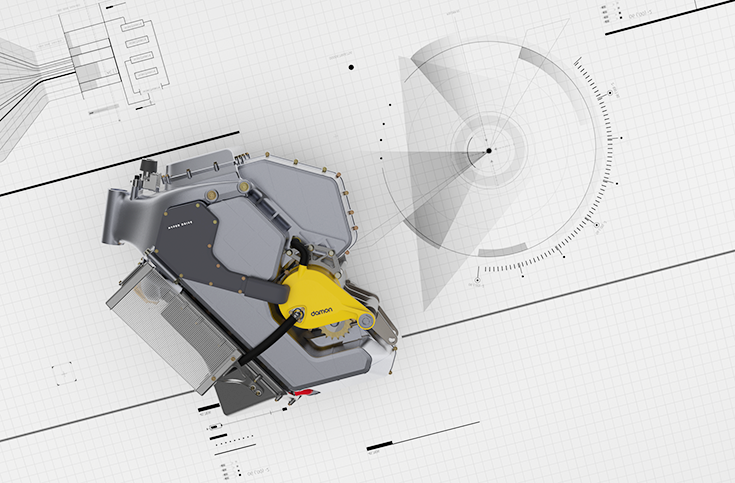 Two-wheeler users remain the most vulnerable to road deaths
For the world's largest two-wheeler market, the focus on user road safety is quite pressing but the latest data points towards an alarming picture. India has over 253,311,000 registered motor vehicles, a comparatively smaller number to the population of the country. Among the top three vulnerable users of the total number of road crash deaths in India, 36.5 percent of individuals were two-wheeler users, followed by car, taxi, vans and LMVs (16.6%) and pedestrians (15%). 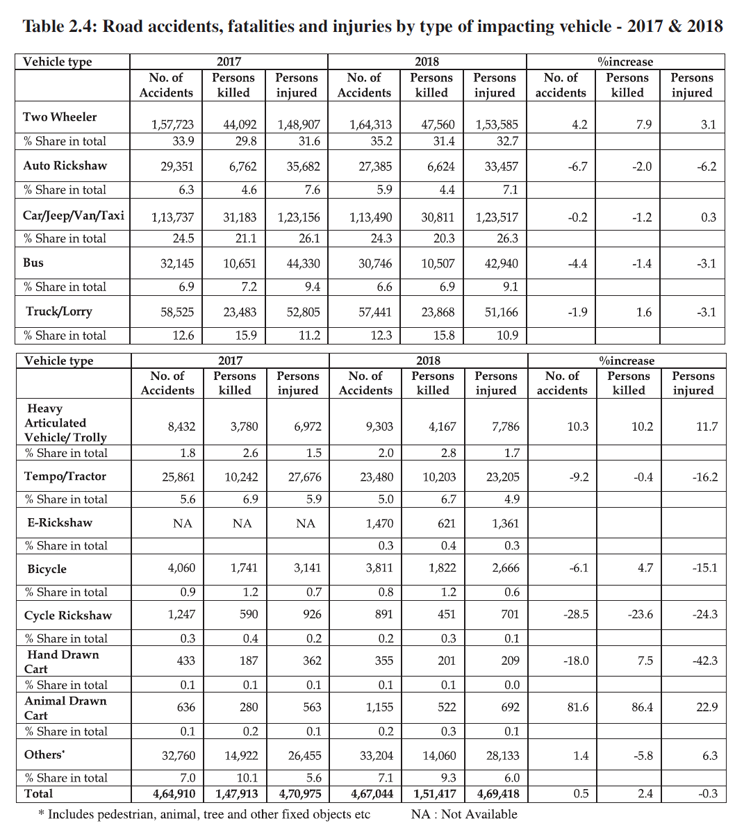 Despite two-wheeler users being exposed to real danger on Indian roads and accounting for the highest number of road fatalities as also the mandate by the government of India on use of a life-saving helmet, the non-usage of helmets caused around 43,614 deaths (approximately 29%). For passenger vehicle users, non-use of seatbelts saw 24,435 (16%) deaths in 2018.

A closer analysis of the data on the profile of users involved in road fatalities as per the age group reveals that maximum lives were lost between the 18-35 year group (48%), and around 9,977 children (below 18 years) lost their lives due to road crashes in 2018. This translates to 27 child deaths each day.

Commenting on the 2018 report data, Piyush Tewari, founder and CEO, SaveLife Foundation said: "The data provided by the government for 2018 points out that the number of road crash deaths in 2018 has increased at the national level. However, what is important to note is that a lot of states which have opposed the implementation of the Motor Vehicles Amendment Act or have even reduced the fines are amongst the states with highest road crash fatalities. The latest data highlights the urgent need on the part of the states to implement key road safety provisions of Motor Vehicles Amendment Act, 2019."

The report findings analyse accidents and fatalities with regard to road features and says that vehicle speed tends to be high on straight roads in open areas which corroborates the high percentage of road accidents, persons killed and injured (varying in the range of 62-66%) on these roads in both 2017 and 2018. Road features such as sharp curves, potholes and steep grade tend to be more accident-prone because successfully negotiating such road features require skill, extra care and alertness on the part of the driver/rider.

"The largest increase in the number of accidents, those killed and those injured also took place in the curved road, bridges and straight road category. The share of potholes, steep grade and culverts in accidents, deaths and injuries has reportedly reduced in 2018," says the report.

Despite low vehicle per capita, India third in global road accident rankings
India, which is one of the fastest growing automotive markets, still lags behind developed countries when it comes to vehicle penetration per capita. However, on the other hand, India ranks just behind United States and Japan, when it comes to the number of road accidents, fatalities and injuries, a matter of serious concern. 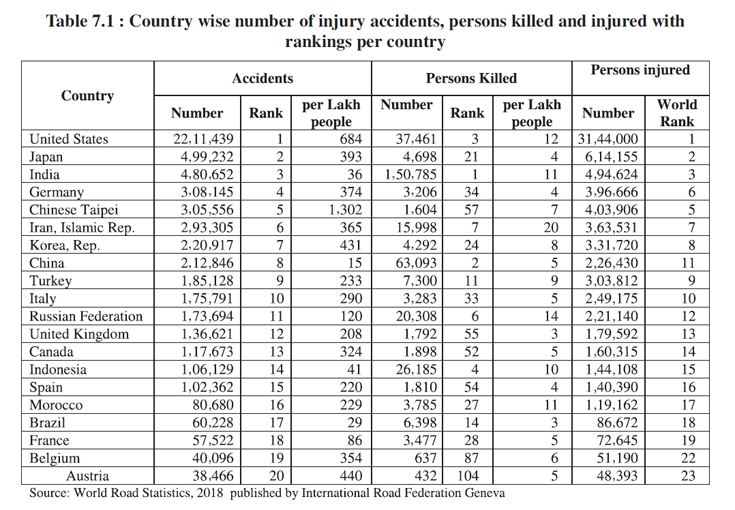 To its credit, the government of India recently introduced the Motor Vehicle Amendments Act, 2019, which calls for stringent fines to be levied for breaking traffic rules. But given the soft approach by many Indian states to implement or reduce the new penalty structure, the need for addressing the most pressing issue of road safety – and saving lives – remains as strong as ever.