Renault is targeting the new crossover at the executive sedan buyer, as well as customers from other categories who are in the market for a car in the Rs 10-15 lakh price range. 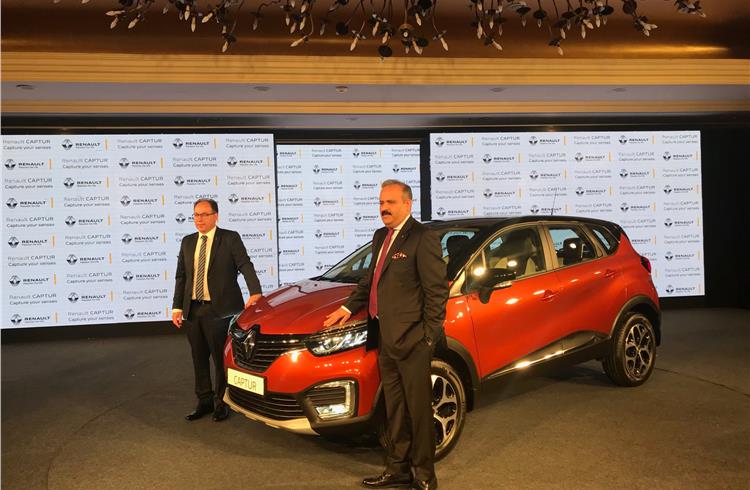 Renault India, which is looking to rev up its performance in India and ride the ongoing SUV sales boom, officially launched the Captur crossover today with an aggressive pricing strategy. The model range starts at Rs 999,000 for the RXE petrol and goes up to Rs 13.88 lakh (ex-showroom all India) for the top-end Platine diesel variant.

The Captur for India is based on the Renault Duster (M0 platform) also currently on sale in the country, despite it sharing its nomenclature with the smaller and more accomplished Renault Clio-based Captur sold in Europe.

The company is positioning the Captur as a premium offering above the Duster, which has been on sale in India since 2012. Renault is targeting the new crossover at the executive sedan buyer, as well as customers from other categories who are in the market for a car in the Rs 10-15 lakh price range.

The crossover gets butch styling with a strikingly high ground clearance of 210mm. The front gets a sloping bonnet, which has two muscular creases that end in a prominent grille, adorned by LED headlamps on either sides, which also get integrated DRLs and dynamic turn indicators. The fog lamps too are LEDs and with their bold design, give the face of the car quite an appealing look.

From the side, the Captur is slightly longer (+14mm) than the Duster, and looks a bit stretched with its 4329mm length. It is, however, less in both width (1,813mm) and height (1,619mm) than the Duster by 9mm and a substantial 76mm respectively. Both models get the exact same wheelbase at 2673mm. The Captur gets a dual-tone paint scheme for the body and roof and the ORVMs also come finished in piano-black.

The Captur’s window line rises towards the back and there is a character line, which starts from the front door and ends into the wraparound tail-lamps at the rear, which again sport LED elements. The crossover gets chunky skid plates and blackened door protectors, which add  ruggedness to the design. There is also the presence of 17-inch floral pattern machined alloy rims on the top trim, which add to its imposing stance.

On the inside, the Captur gets an ivory-and-black colour combination scheme for the cabin trims and sees contemporary styling for the dashboard. It gets a touchscreen infotainment system, which, however lacks Android Auto and Apple CarPlay functionality. The instrument cluster is smart and gives a modern feel to the cabin and the crossover also gets quilted leather seats on the Platine variant launched in India.

The Renault Captur comes powered by the same engine options as in the Duster. These include a 1.5-litre, four-cylinder, 105bhp petrol motor, which comes mated to a 5-speed gearbox, as well as Renault's popular 1.5-litre K9K four-cylinder diesel unit, which develops 108bhp of power, 240Nm of peak torque and is to a 6-speed manual gearbox.

In terms of safety, the Captur is equipped with dual airbags, ABS with EBD, ESP, hill start assist and brake assist as standard. The Captur comes offered three variant options (RXE, RXL and RXT) in both petrol and diesel, with the top-of-the-line Platine variant only available in the diesel trim. The crossover comes available in seven dual-tone colour options and five monotone shades. Renault is also offering a personalisation program for customers to include decals and body graphics on the roof. The company could also explore the possibility of bringing out an automatic as well as an AWD offering on the Captur the near future as well.

Targeting 80 percent localisation
With the launch of the new crossover, Renault India, which has witnessed a slowdown in sales in the country in the recent past, will try to revive its strong presence in the booming crossover space in the market. Renault, which has invested 110 million euros (Rs 840 crore) to bring the Captur to India, aims to increase the localisation content of the model to 80 percent. According to Sumit Sawhney, country CEO and managing director, Renault India, “We will be moving up to 80 percent localisation by value for the Captur. Also, when an OE is in the ramp-up mode, there is a need to increase the localisation to afford to bring a car in this segment at this price point.”

Renault's domestic total sales for the H1 of FY2018 stand at 54,447 units (-21.87%), with the Duster going home to around 8,000 buyers during this time. Its exports, having grown 58 percent between April-September 2017, still account for a small quantum with over 6,000 units, with the Kwid being exported to South Africa, Sri Lanka, Bhutan, Nepal, and more recently to Bangladesh.

Renault India, which aims to achieve 5 percent market share by end of 2017, currently has a 4.09 percent share of the passenger car market and 3.34 percent share of the passenger vehicle market. The company, which has three products in its stable, is feeling the pressure from the slowdown in the mini segment where its entry level offering, the Kwid, is pitched in. The company plans to launch one new product every year and continue to eye the 5 percent market share.

According to Sawhney, “Even though being a rather young company in India, we have made a strong foundation, having an annual capacity of 480,000 units at our Chennai plant, along with a parts distribution centre, and 6,000 engineers working at the R&D centre in the country. The UV segment is growing across the world, and in India alone it has seen a remarkable growth of over 45 percent over January-October this year. Now, the trend is moving towards stylish SUVs. Seeing that, we've included some really disruptive and innovative features into the Captur like the infinity cluster, rear AC vents, DRLs and start-stop system.”

While the company didn't reveal any expectations on initial sales numbers, Sawhney said, “We are geared up for any volume and we will be able to serve as per the customer demand which comes in for the Captur.”

Also, with the Captur undercutting the higher-tuned 108bhp range of the Duster, is there any likelihood of cannibalisation? Sawhney, who feels otherwise, says: “Globally, the Captur hasn't cannibalised the Duster and we expect the scenario to be the same in India as well.”

Dealer network to reach 320 units by January 2018
Meanwhile, Renault India is moving ahead with plans for expanding and enhancing its dealer outlets. From 35 in 2011, the dealer network will have grown to over 320 by the end of January 2018. Considering the Kwid is consistently selling around 8,000 units every month, Renault is more likely to focus and enhance its footprint in the smaller cities. Its current dealers are also seen re-investing in the business and coming up with more outlets. There are close to 100 dealer principals for all its 300 outlets.