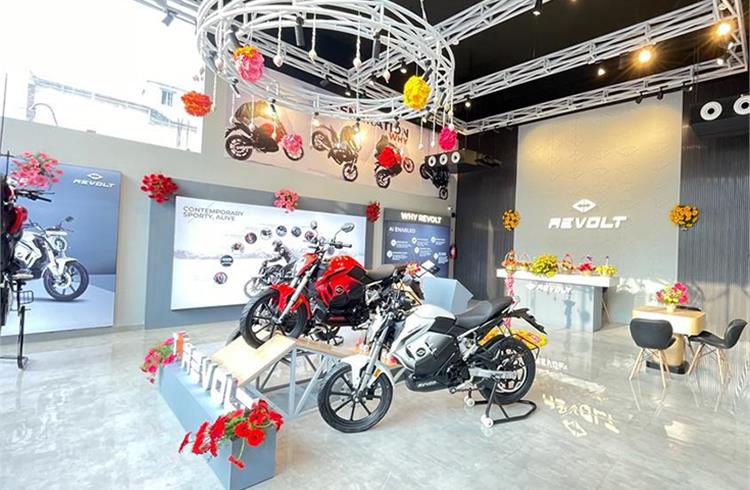 Rattan India Enterprises, the flagship company of the Rattan India Group which is engaged in tech-focussed, new-age businesses including e-commerce, EVs, fintech and drones, is to acquire 100% shareholding in the electric motorcycle OEM Revolt Motors. The company had earlier acquired 33.84% shareholding in Revolt with an option to further increase the shareholding. The company made the announcement through a stock exchange filing.

Revolt Motors, which began commercial operations in August 2019 with two electric motorcycles: the RV300 and RV400. The OEM has its manufacturing facility in the automobile manufacturing hub of Manesar, Haryana. Over the past year, Revolt Motors has expanded its all-India retail footprint with 29 dealership stores spread across various cities in India. The most recent were on September 26 in Tiruchirappalli, Tamil Nadu and another one in Faridabad, Haryana on September 29.

The company’s flagship bike, the RV400, has a 3kW (mid-drive) motor powered by a 72V, 3.24kWh lithium-ion battery that develops a top speed of 85kph. The RV400 features three riding modes – Eco, Normal and Sport. The Revolt e-motorcycles, which have a top speed of 85kph, have a range of 150km on a full charge, which takes four hours.

Revolt Motors is one of the very few electric motorcycle makers in India, which mostly has electric scooter OEMs and will face its first major challenge when the Bengaluru-based Ultraviolette launches its F77 performance bike which is now production-ready and is being tested. Tork Motors (Kratos), Pure EV (Etryst 350) and Emflux Motors (Emflux One) are the other companies with electric motorcycles. Hero MotoCorp is also planning to enter this segment and has recently announced plans to jointly develop products with Zero Motorcycles of the USA.

India is home to the largest two-wheeler market in the world with motorcycles leading the way with 60% market share. Like all EVs, electric motorcycles offer a huge cost advantage compared to petrol-engined bikes with their running cost being an estimated one-tenth of a petrol bike.

Speaking on the transaction, Mrs. Anjali Rattan, Business Chairperson, Rattan India Enterprises said, “With this acquisition of 100% shareholding in Revolt Motors, we are doubling down on our belief that the EV revolution in the country is coming in faster than we anticipate. I do not have any doubt that what is good for environment and the country makes for a great business. Indians are very keen customers when they see value. We are ready for next growth phase for Revolt Motors.”

Rahul Sharma, MD of Revolt said, “It is proud moment for me as we pass on the baton for next phase of Revolt’s growth trajectory. I am very proud of what we have created with Revolt. Revolters love their Revolts and there is a huge demand for our bikes. I am sure the Revolt revolution has just begun.”