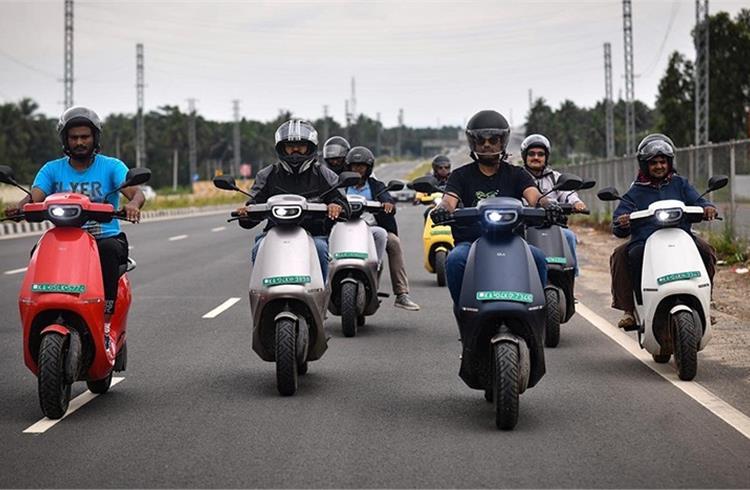 On the back of scooter portfolio, improved chip supplies and positive sentiment during festive season, Softbank-backed Ola Electric has despatched its highest ever monthly despatches of 20,000 units in October 2022.

The maker of S1 scooters has grabbed the Number One position and edged ahead of its rivals Okinawa, Ampere, Hero Electric, Ather Energy and TVS Motors amongst others, as per the Vahan data.

From slipping to the fourth position in June due to safety concerns about its vehicles and recording an all-time low of 3,426 units in July, Ola has now reported its new peak in monthly retail sales at 15,095 units for October, the data revealed.

The retails in October were 53 percent higher over 9,634 units it had sold in September.

The launch of a new entry level model and opening up of experience stores has helped Ola create more traction in the marketplace, said people in the know. The opening up of physical stores has also re-assured prospective buyers to opt for Ola and helped the company improve its turnaround time, added the people.

In an official response to Autocar Professional, the Ola spokesperson said it had been a very healthy festive season for the company.

“20,000 units despatched in the festive month of October is the highest for any EV brand in India, this growth was at almost double the pace of industry. Ola clocked a 60 percent growth month on month, while the overall EV 2W market grew by almost 30 percent. The company recorded 4x growth over its daily run rate during Navratri and 10 times growth during Vijayadashami,” added the spokesperson.

While Ola has topped the EV charts for the second time in the last two months, the electric two-wheeler industry has posted its highest ever registration of 68,324 two-wheeler EVs sold in October.

The monthly sales of EVs earlier hovered around the 50,000-unit mark in the previous months of Sept and August.

Not only have the newer incumbents clocked their all-time highs, but legacy players like Hero, Bajaj & TVS expansion pan India will, “boost customer sentiment to make a faster shift to EVs that has been limited by the fire incidents," Singhania believed.