TVS’ performance scooter is a hit with millennials in the 125cc segment with its design, performance and sporty attributes. 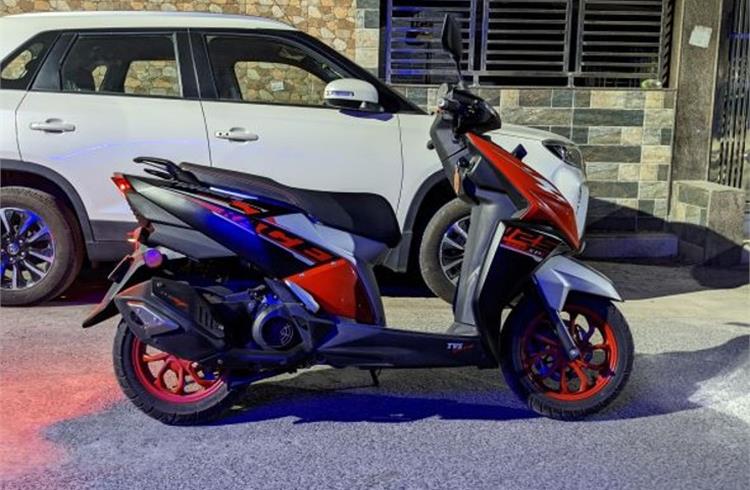 Before the slump in  sales triggered by a series of price increments due to the regulatory requirements on additional safety equipment such as ABS and CBS that became effective in April 2019, and the further price hikes due to BS VI emission requirements a year later, scooters were riding in the fast lane.

A popular choice for college goers, youngsters, women and elderly, scooters have enabled people to be independent on two wheels. India’s scooter sales were at their peak in FY2018 when the Indian two-wheeler segment collectively breached the 2-million sales milestone for the first time ever. Of the total two-wheeler volumes of 20,192,672 units, scooters went home to 6,719,911 buyers, recording a 20 percent year-on-year uptick (FY2017: 5,604,673).

However, the sales momentum couldn’t sustain and two-wheeler volumes in the country only grew marginally by 5 percent the next fiscal due to emission and safety norms. With the pandemic, scooters saw an even further fall, what with schools, colleges and offices being shut for the longest-possible time.

While the Honda Activa, has been ruling the roost in the Indian scooter market for close to two decades, TVS Motor Company has been giving a tough fight with its array of enticing products like the  Jupiter, and the Ntorq 125 – which was introduced in February 2018.

Brand Ntorq 125
The Ntorq has been an attempt by TVS to lure millennials with the snazzy styling and powerful riding characteristics from its 125cc engine differentiating it from the mainstream options. The Ntorq 125 has been a runaway success story for TVS, with sales of 213,039 units in FY2019, and its best-ever monthly sales of of 25,578 units in August 2019, despite turbulent market conditions by that time.

However, to keep the buyer interest intact, the company has been swift in introducing a range of different versions of the Ntorq 125. TVS introduced the Ntorq 125 Race Edition in September 2019 with features such as LED DRLs, headlamps and a race-inspired user interface on its mobile application for this Bluetooth-enabled scooter.

And in came the Ntorq 125 Race XP in July last year. The XP featured not just aesthetic updates, but, tweaks to the 124.8cc engine.

Racing appeal
The Race XP also gets two riding modes – Street and Race – and true to its name – the scooter accelerates eagerly in the latter to offer brisk performance to the rider. The performance is also elevated with the throaty exhaust note, which has been an Ntorq trademark and clicks well with the millennials. TVS offers both drum and disc-brake versions on the Ntorq 125 Race XP, and coupled with its broad 12-inch tyres, braking performance and stability is quite reassuring on this nimble scooter which feels easy to ride in traffic and makes quick manoeuvres a breeze.

The looks are much in sync to reflect its sporty credentials too, with special elements such as the red-painted alloy wheels, chequered flag and ‘Race’ graphics on the body panels calling for attention.

Although it’s targeted at youngsters, the Ntorq 125 Race XP’s practicality is a little restricted. The under-seat storage is only sufficient for a half-face helmet while the leg room is adequate for short riders, with the short floorboard being only able to carry a limited payload. The grab-handle design at the rear might not fit the bill for the family-oriented buyer either.

However, with an under-seat LED light, as well as the front LED headlamps that supremely brighten things up at night, the Ntorq 125 Race XP is one scooter that would continue to strike a chord with the enthusiastic rider, and offer performance that still matches that of the upcoming breed of quick-to-accelerate electric scooters.