The Nissan Micra has received a few cosmetic and feature refreshes in its 2017 avatar for India but the all-new fifth-generation global version is not coming here. 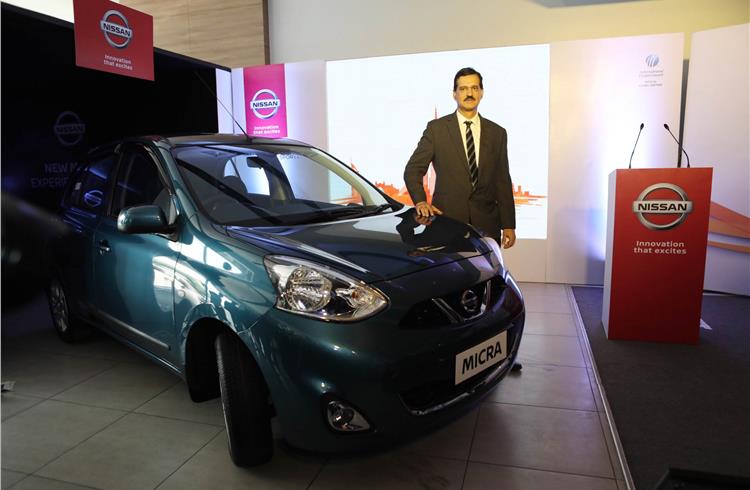 The car, which was first launched in India in 2010, now comes in a tweaked form to keep itself afloat in the hugely competitive B+ hatchback segment in the Indian market. The updated Micra retains the overall silhouette, with no major design changes making way to any of the body panels.

The refreshes are reflected in the features as well as in the cabin. Nissan has incorporated three key intelligent features to the updated Micra, which include automatic headlamps, follow-me-home and lead-to-car functions and rain sensing wipers.

The changes on the inside are in the form of orange garnishes, which accentuate the centre console, door trims and AC vents. The seat upholstery is all black and the cabin remains largely unchanged, with a 2-DIN non-touch basic music system.

The safety kit on board includes dual airbags and ABS with EBD.

Engine and transmissions
The Micra continues to be powered by the same engines as on the outgoing car, which include a 1.2-litre four-cylinder petrol motor, and the diesel being the ubiquitous 1.5-litre K9K unit from Renault’s range, brought in with its 68bhp state of tune. The petrol comes only mated to an X-Tronic CVT gearbox, while the diesel gets a 5-speed manual transmission. There, however, is the option of a manual transmission with the petrol, but that comes in the slightly stripped-down Micra Active version.

The Micra has been a sluggish seller in the company’s India operations. Nissan would have done well to bring in the all-new fifth-generation model here but that is not on the cards. Since July 2010 till end-April 2017, the Micra has cumulatively sold 80,588 units in India – 47,488 petrol and 33,140 diesel. However, the car has been exported in much larger numbers to 106 countries. Nissan sees regular exports to around 60 countries out of this pool but with the Micra being completely revised in a number of foreign markets, the Indian management is expecting a dip in the exports numbers, but hasn't put any concrete numbers on the table.

The company, which registered cumulative sales numbers of 3,280 units in April 2017, and exports of 5,940 units (-5%) is holding onto the Micra to keep offering a product in the small car space, in the highly price-sensitive Indian market.

New Nissans and Datsuns in the offing
Nissan India also plans to bring in 8 completely new products in the Indian market until 2021, including four products from its subsidiary, Datsun. The company is also not ruling out the likelihood of introducing electric vehicles from its global portfolio as part of its future product strategy for the Indian market.