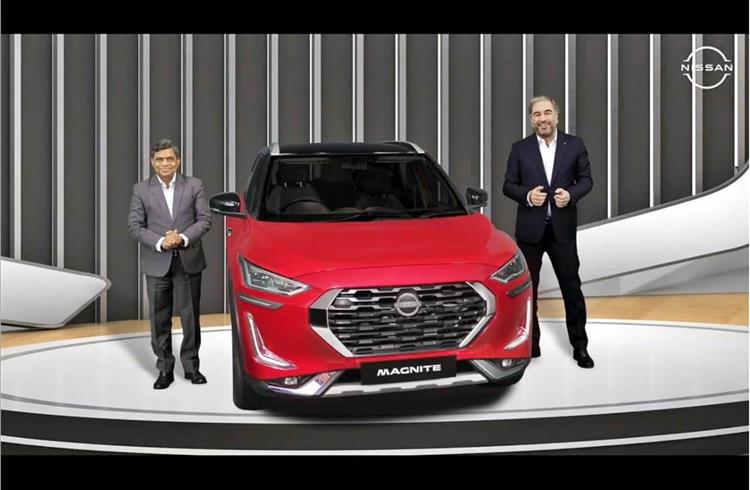 The Nissan Magnite has just been launched in India, making it the newest entrant in the compact SUV segment. Nissan has priced the Magnite aggressively in our market with the range starting at Rs 499,000 for the base XE trim and goes up to Rs 935,000 for the top-spec XV Premium CVT-equipped variant. The company has also announced that prices are introductory and will go up from January 1, 2021.

In terms of styling, the compact SUV is well proportioned and has a muscular stance that is accentuated by its strong body lines. Some of the Magnite’s stand-out design features include the L-shaped LED DRLs, swept-back headlights, large octagonal grille, thick C-pillars, haunches above the rear, and the black body cladding that goes around the SUV.

In terms of gearbox options, both engines come paired with a 5-speed manual gearbox as standard. The turbo-petrol additionally gets the option of a CVT automatic gearbox, but in this configuration the engine’s torque output drops by 8Nm (to 152Nm).

It is worth mentioning that the Magnite’s pricing makes it the cheapest offering in its segment, and by a decent margin at that. At its introductory Rs 4.99 lakh starting price, it is priced substantially lower than the Kia Sonet (Rs 6.71 lakh) and Hyundai Venue (Rs 6.75 lakh), both of which previously had the most affordable starting prices in the segment.

Even on the higher-end of the spectrum, the Magnite continues to undercut its rivals. At Rs 9.35 lakh, the CVT equipped top-spec XV Premium trim is cheaper than all the entry-level automatic compact SUVs, barring the AMT-equipped Nexon XMA. In fact, the top-spec manual’s price is closer to its rival’s mid-spec trim-levels.

These factors combined should help increase the Magnite’s appeal in our market. 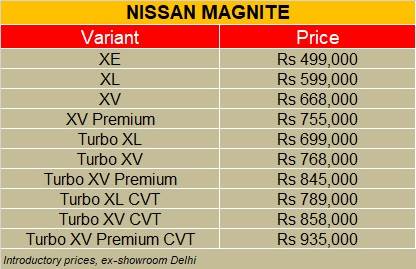