The German carmaker has taken its CSR initiative to Kerala, which is among the 13 states in India that record a very high number of accidents each year. 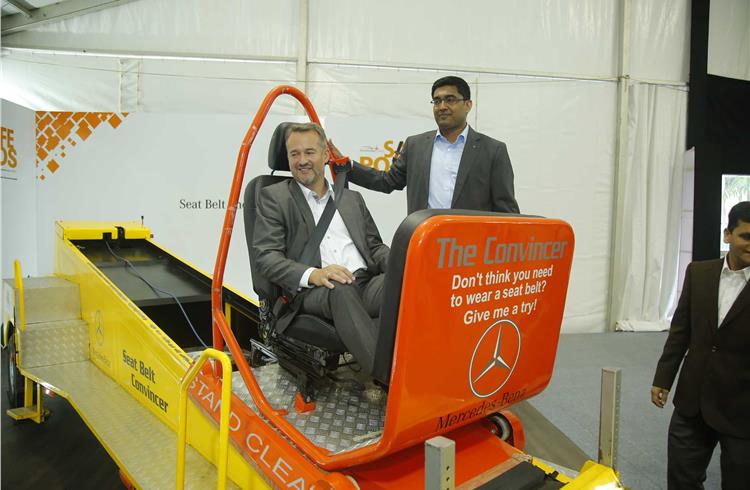 Mercedes-Benz India has taken its ‘Safe Roads’ exhibition that educates about traffic safety through physical demonstrations, visual aids and research reports to Kochi, Kerala. Kerala, which recorded 39,014 road accident fatalities, ranks fifth in the list of 13 top Indian states with the maximum fatalities.

The German carmaker is renowned worldwide for developing highly sophisticated safety systems. However, implementation of effective safety systems remains a challenge, as road users often do not comply with traffic rules or do not use the safety systems onboard their vehicles. 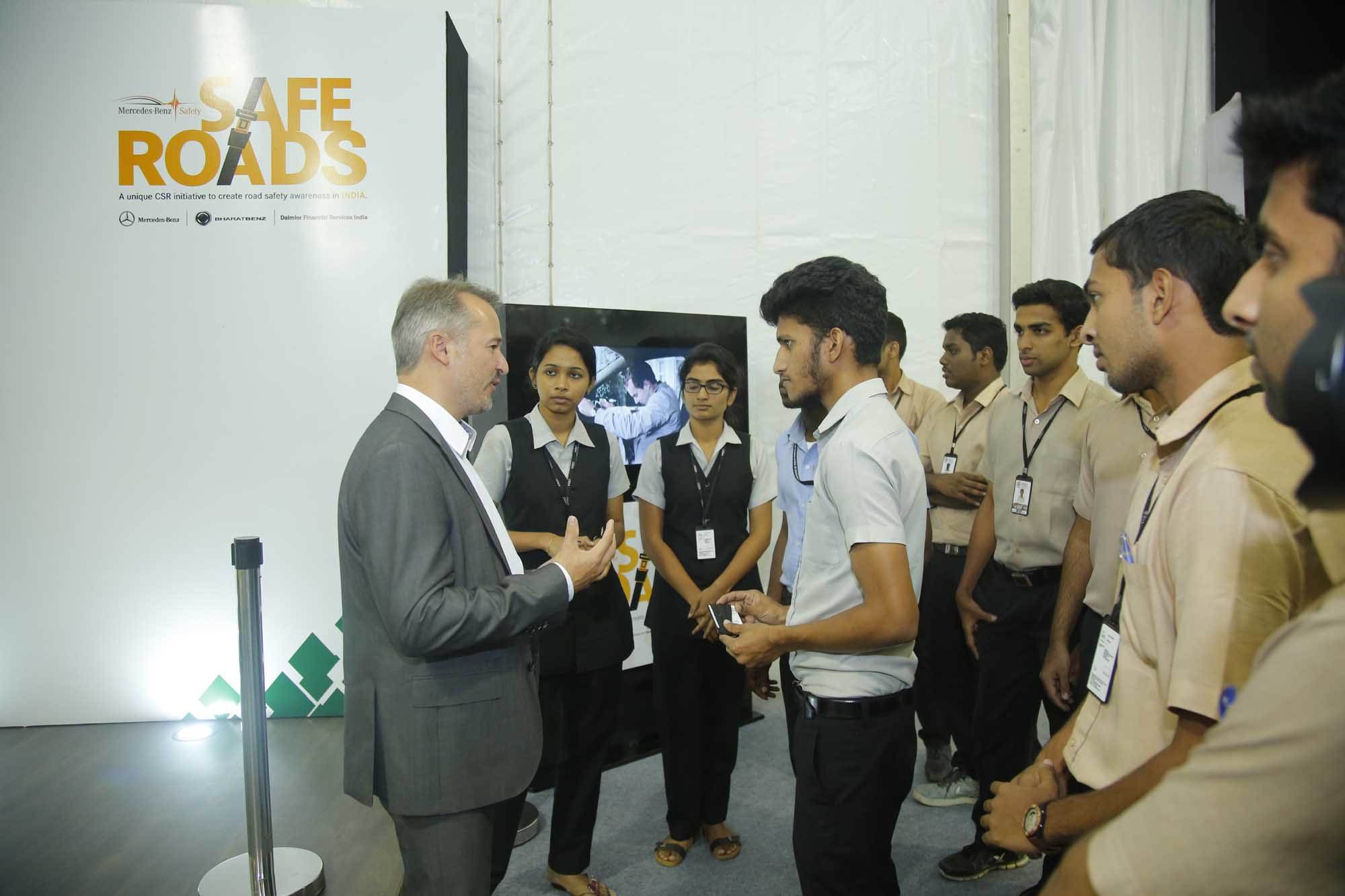 Mercedes-Benz says it is convinced that such initiatives can begin an era of road safety awareness that supports a new culture of road safety for Indians. Over 70 percent of the fatalities can be reduced in the next 10 years through education and enforcement of safety rules and by creating awareness.

This Safe Roads initiative was flagged off today at Rajagiri College, Kochi by Jochen Feese, Head of Accident Research, Sensor Functions and Pedestrian Protection, Mercedes-Benz Cars, in the presence of Manu Saale, MD and CEO, MBRDI.

The most popular exhibit remains the Belt-Slide which enables visitors to experience the impact of seatbelts in a simulated crash environment at low speed. The aim is to increase the percentage of seatbelts usage for front row passengers including driver. New exhibits for this year are: 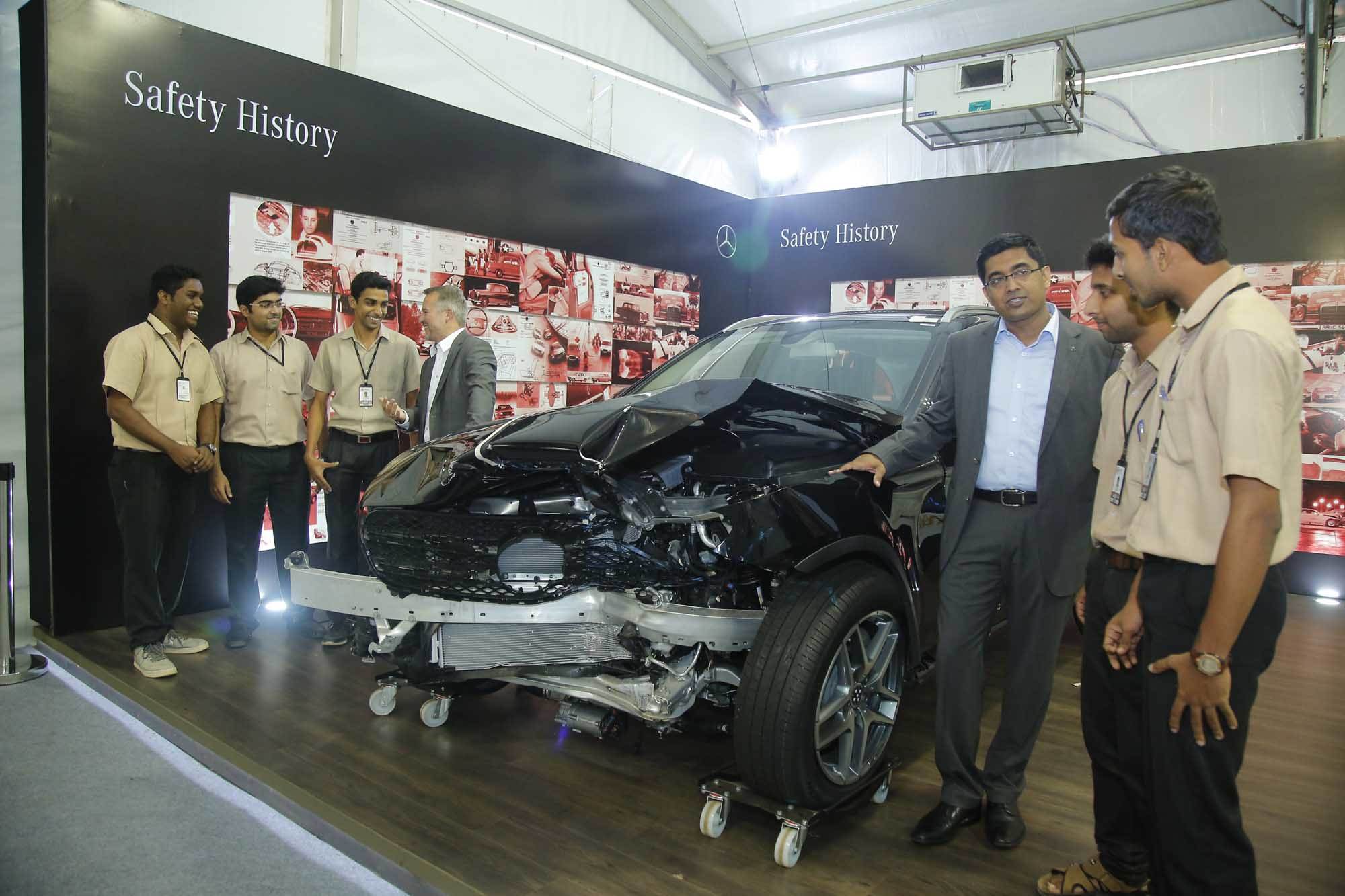 This enables visitors to experience the PRESAFE features of the seat. Using a network of sensors, the PRE-SAFE system can detect certain conditions that suggest an accident is about to occur. The PRE-SAFE seat system then pre-tensions the front seatbelts, adjusts the front head restraints and passenger seat to better prepare the occupants for more effective results from the restraint systems.

There’s also an S-Class S500 which gives a glimpse of future of safety by illustrating innovations in the field of active and passive safety. Other kit on display include airbags (driver and passenger airbags, curtain airbags, knee bags), and a ‘Body in White’ (BiW) passenger car exhibit that highlights some of the core elements of a car structure which have high tensile strength that can absorb most of the energy during a crash and minimise passenger car intrusions.

Alcohol goggles provide a unique experience as wearing these special types of glasses simulates the common ‘walk-the-line’ activity which causes loss of balance and delayed reaction times. Visitors will feel their susceptibility to impairments and realise the potential severe consequences due to alcohol consumption.

India is a signatory to Brasilia Declaration and is committed to reduce the number of road accidents and fatalities by 50 percent by 2020. However, with one of the highest motorisation growth rates in the world accompanied by rapid expansion in road network and urbanisation over the years, it is faced with serious impacts on road safety levels.

Recommended: Full list of road accidents in Indian states in 2015

Jochen Feese, Head of Accident Research, Sensor Functions and Pedestrian Protection, Mercedes-Benz Cars, said, “Safety is a core value for Mercedes-Benz. Therefore, all our business units stress safety as a priority for the user as well as for the environment they are operating in. When we learned about the accident and fatality rates in India, we decided to develop the ‘Safe Roads’ CSR initiative. This is also in line with our spirit of good corporate citizenship – meaning that we like to contribute to the society we do business with. We hope that our initiative will kick-start an era of road safety awareness and will support a new culture of road safety among the people in India.”

Manu Saale, MD and CEO, Mercedes-Benz R&D India, added, “Technology, innovation and research go hand-in-hand in improving vehicle safety. With the Safe Roads initiative, we have brought in a new era of safety awareness keeping the Indian road scenario in focus, accidents and resulting fatalities can not only be greatly reduced through innovative technologies but also through responsible driver and passenger behavior. Mercedes-Benz has developed the state-of-the-art safety features that have proven to be effective. In MBRDI alone, there are over 100 engineers contributing to these technologies in active and passive safety of Mercedes-Benz vehicles with 54 patents filed on automotive safety. While there are some policy and regulatory hurdles that exist in order to apply them in India, we hope that the ‘Safe Roads’ initiative will enhance the road users’ awareness of such technologies and will help persuading the legislators to ease these norms for the greater good of society.”

Recommended: Road rage on the boil in India