Passenger vehicle market leader ups the ante with the five-door Jimny, which is slated for launch in May 2023, and the Baleno-based Fronx SUV-coupe. 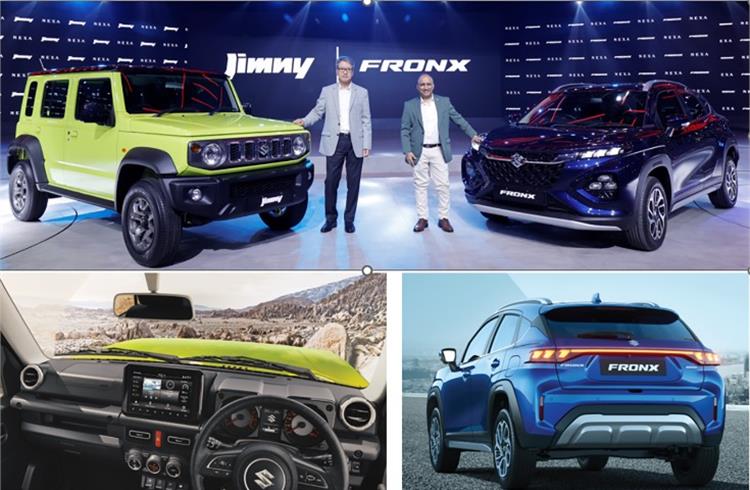 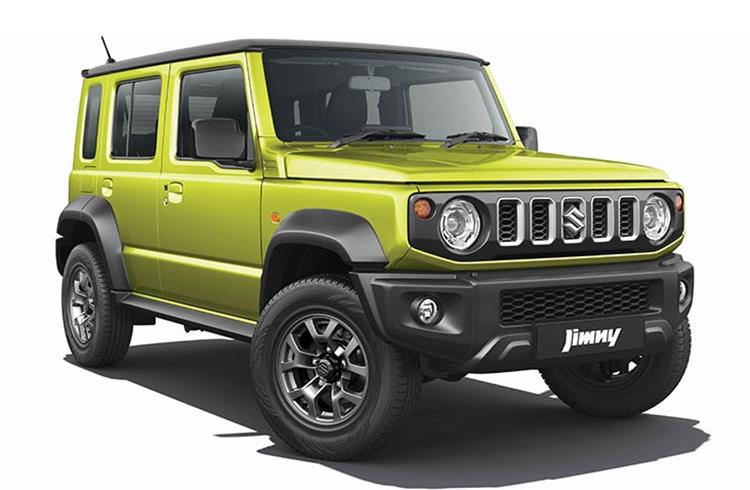 India will be the first market where the Jimny 5-door will go on sale by mid-2023, followed by Suzuki's other global markets. 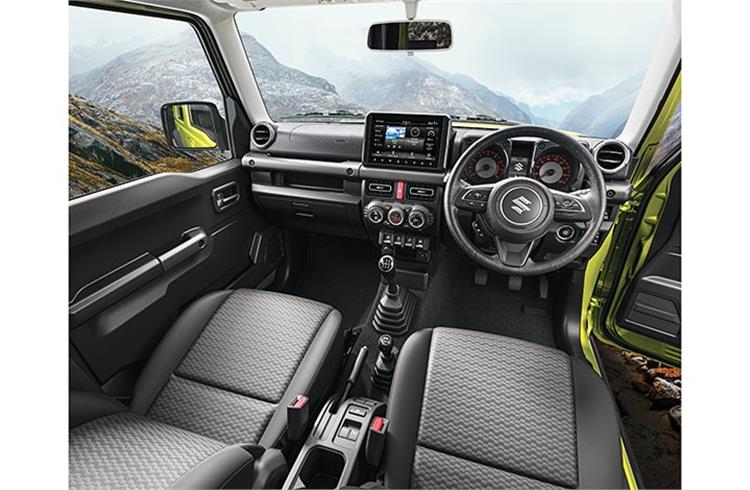 The India-spec Jimny is a 5-seater model with a bench seat layout for the second row. 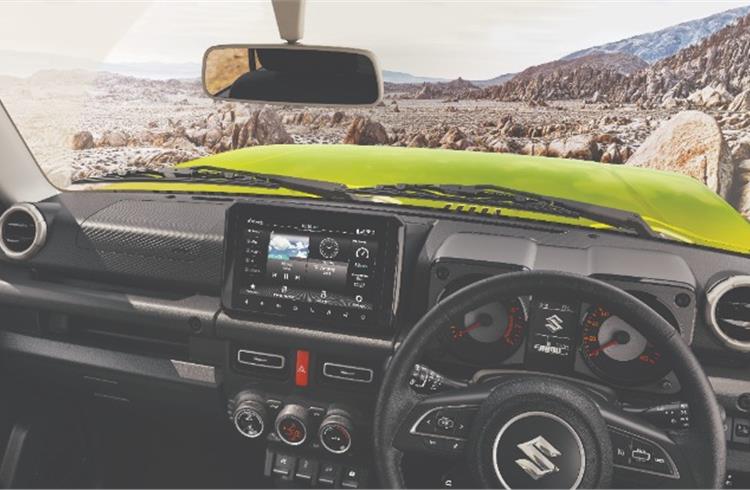 The Jimny dashboard has an all-black theme with a high-mounted 9.0-inch touchscreen taking centrestage. 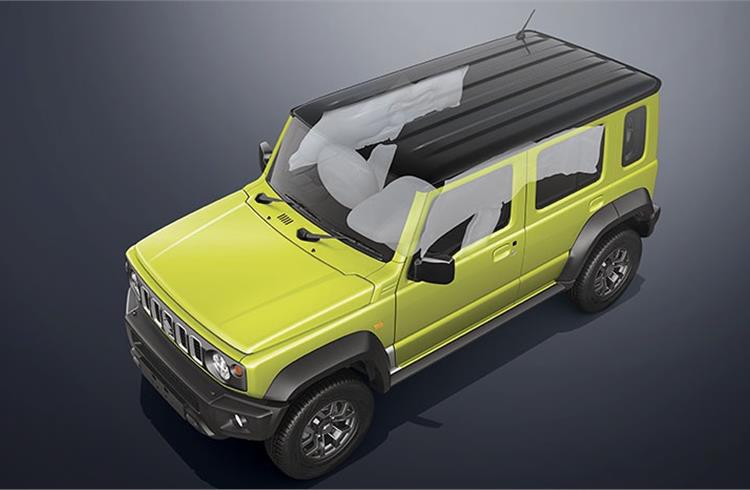 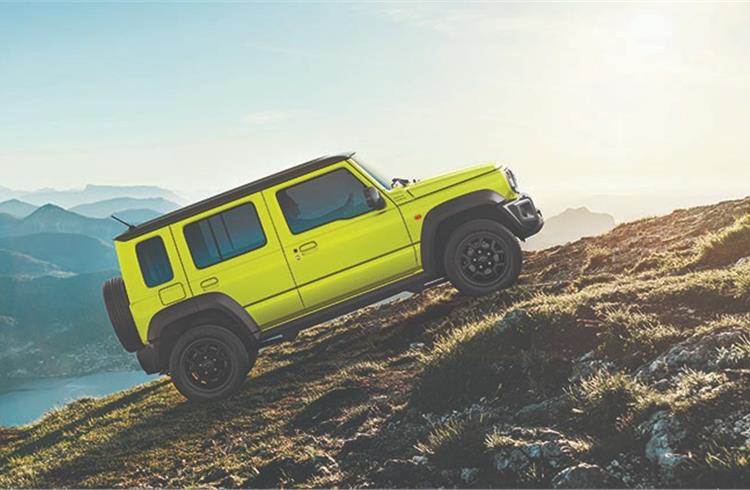 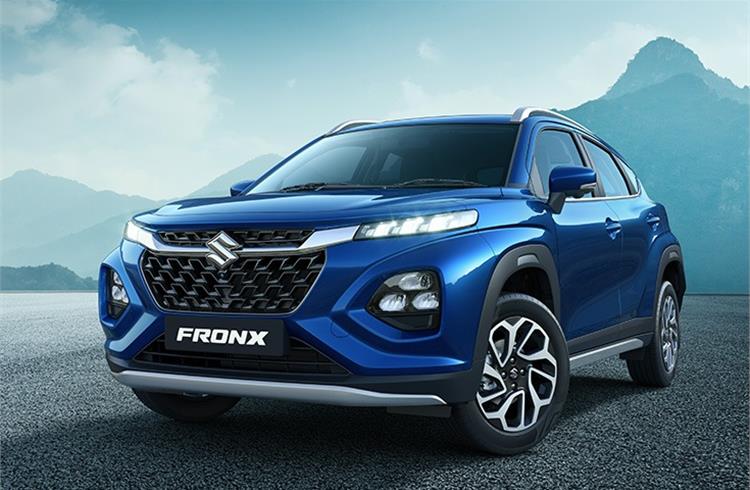 The Fronz will go on sale by March-April and will be positioned as a premium compact SUV. 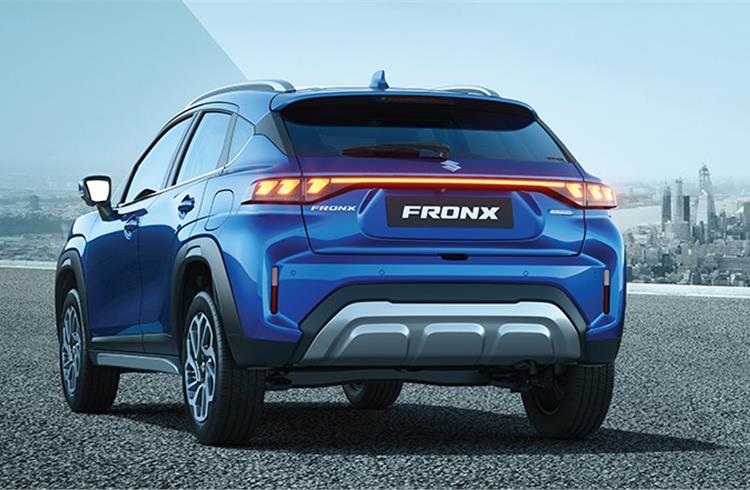 Fronx will take on high-riding hatchbacks and compact SUVs like the Citroen C3, Tata Punch, Nissan Magnite and Renault Kiger. 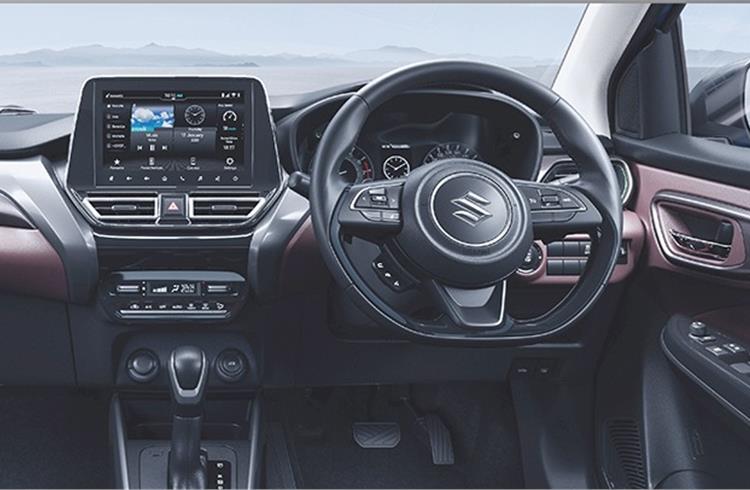 On the inside, the Fronx shares many bits with the Baleno.

A day after it took the covers off its first electric vehicle concept, the eVX, at Auto Expo 2023, passenger vehicle market leader Maruti Suzuki India has had the global debut of the Jimny 5-door SUV as well as the sporty Fronx SUV-coupe. Bookings for both models have opened in the Indian market.

The surging demand for SUVs in India has seen the passenger vehicle (PV) market record its best-ever annual volumes of over 3.8 million units in CY2022. At present, nearly 50% of total PV volumes comprise utility vehicles, which translates into every second car sold in India being a UV, SUV or MPV. Maruti Suzuki India, which has lost market share in recent times, is keen to regain traction in the booming UV market and these two new SUVs are aimed in that direction.

Unveiling the two new products, Hisashi Takeuchi, Managing Director and CEO, Maruti Suzuki India, said, “We have been witnessing a rapid shift in customer preference towards SUVs. Both our recently launched SUVs – the Grand Vitara and New Brezza – have received a resounding response from the market and are enjoying strong customer demand. The new Fronx will set the trend for a shape of new SUVs in the country and the much-awaited Jimny with its legendary off-road prowess offering an authentic motoring experience both on and off-road.”

Five-door Jimny to roll out of Gurugram plant

The Jimny for India is 3985mm long, 1645mm wide and 1720mm tall, with a wheelbase of 2590mm. The newly designed rear doors blend neatly with the Jimny’s boxy body style but get a much smaller 'usable' rear glass area, due to a largish quarter-glass for the rear door. The Jimny 5-door rides on 15-inch alloy wheels wrapped with 195/80 section tyres.

Unlike other compact SUVs, the India-spec Jimny 5-door stays true to its name with rugged underpinnings and is an off-roader at heart. It shares a lot with the shorter 3-door model sold abroad. Apart from a longer wheelbase, two additional doors and redesigned rear quarter, the India-spec Jimny 5-door looks pretty similar to the global 3-door version. The signature Jimny design traits – upright pillars, clean surfacing, circular headlamps, slatted grille, chunk off-road tyres and flared wheel arches – are all there on the India-spec model as well. 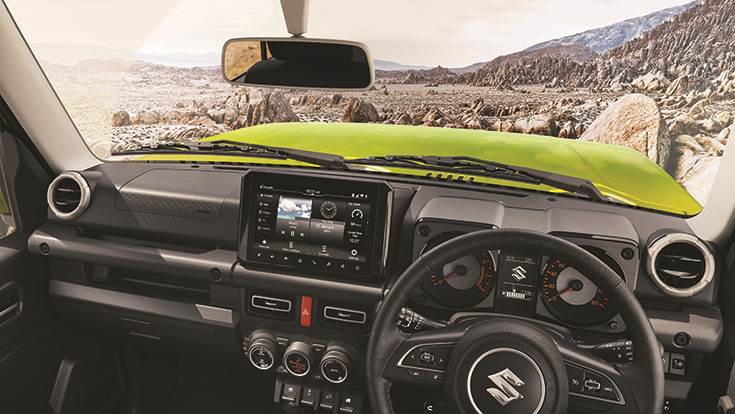 The interior is also identical to the 3-door model. The dashboard has an all-black theme that looks quite rugged with a high-mounted 9.0-inch touchscreen taking centre stage. Some bits like the steering wheel and circular dials for HVAC controls are shared with other Maruti models such as the Swift. It also gets a dashboard-mounted grab handle on the passenger side and faux exposed bolts that add to the rugged appeal.

What’s unique is a rectangular instrument binnacle with deep set analogue, circular dials for speedo and tachometer with a separate MID in between. Other highlights include plenty of smart storage spaces, a stack of toggle-like switches on the centre console and a 4x4 gear lever as well. The India-spec Jimny is a 5-seater model with a bench seat layout for the second row.

Unlike Maruti’s remaining line-up in India, which has moved on to the newer K15C engine, the Jimny 5-door continues with the older K15B engine that comes mated to either a 4-speed torque converter automatic or a 5-speed manual gearbox. This engine, shared with the 3-door Jimny, produces 105hp and 134Nm of peak torque. It also gets Maruti’s mild-hybrid tech.

In terms of off-road gear, the Jimny 5-door gets Suzuki’s AllGrip Pro 4WD system with a manual transfer case and low range gearbox with ‘2WD-high’, ‘4WD-high’ and ‘4WD-low’. It is underpinned by a rugged, ladder-frame chassis, gets 3-link rigid axle suspension and an electronic traction control system that automatically brakes slipping wheels allowing torque to be redistributed to other wheels. The Jimny 5-door has an approach angle of 36-deg, breakover angle of 24-deg, departure angle of 50-deg and a ground clearance of 210mm.

Expect Maruti to announce pricing for the Jimny 5-door in India sometime in mid-2023. It is expected to be priced at around Rs 12 lakh (ex-showroom) and will rival other rugged 5-door off-roaders such as the 5-door Mahindra Thar and 5-door Force Gurkha. 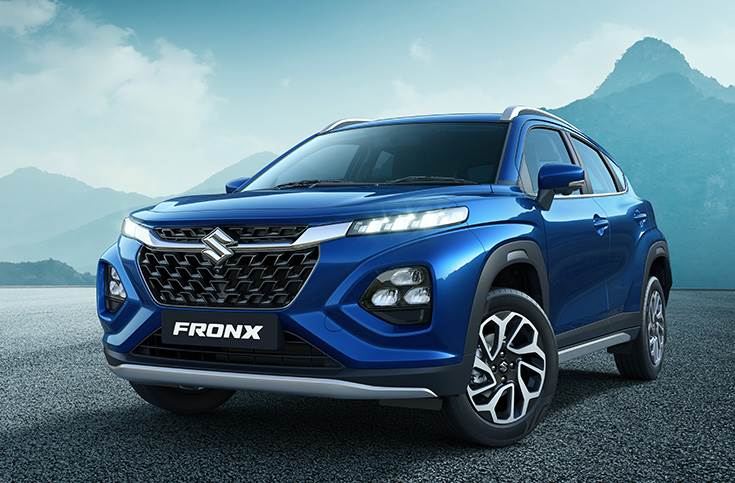 The Fronx is Maruti Suzuki’s Baleno-based SUV-coupe, which means it is also underpinned by the Heartect monocoque platform. Apart from a few body panels shared on the outside, the Fronx gets unique styling with a more upright nose and a split headlamp set-up similar to the Grand Vitara. It will go on sale by March via the brand's Nexa outlets.

The Fronx’s new front and rear bumpers are chunkier with dedicated faux skid plates at both ends and subtle dose of chrome. It gets 17-inch alloy wheels that sport new design, which is again unique to the Fronx and not shared with any other Maruti model.

The Fronx also borrows elements from the Baleno hatchback – like the rising waistline that has a prominent haunch over the rear wheels and the roofline that dips prominently towards the tailgate.

On the inside, the Fronx shares many bits with the Baleno. This includes the dashboard, seating and equipment list, all of which is expected to mirror Maruti’s premium hatchback. Both models, however, will have differences in textures and shades, among other bits.

Maruti Suzuki’s first and only turbo-petrol engine, the 1.0-litre Boosterjet returns with the Fronx and develops 100hp and 147.6Nm of torque. It is paired to a five-speed manual or a six-speed torque converter automatic gearbox (with paddle shifters) options.

Additionally, Maruti also offers the 1.2-litre K-series (90hp and 130Nm) naturally aspirated petrol engine paired to either a 5-speed manual or an AMT automatic transmission. It must be noted that Maruti Suzuki, unlike the Grand Vitara, is not offering an AWD tech on the Fronx.

The Fronz will go on sale by March-April and will be positioned as a premium compact SUV. Like the Baleno, it will be retailed via the Nexa outlets. After its launch, it will take on high-riding hatchbacks and compact SUVs like the Citroen C3, Tata Punch, Nissan Magnite and Renault Kiger.