While the first million exports took 26 years, the second million has come up in eight years. 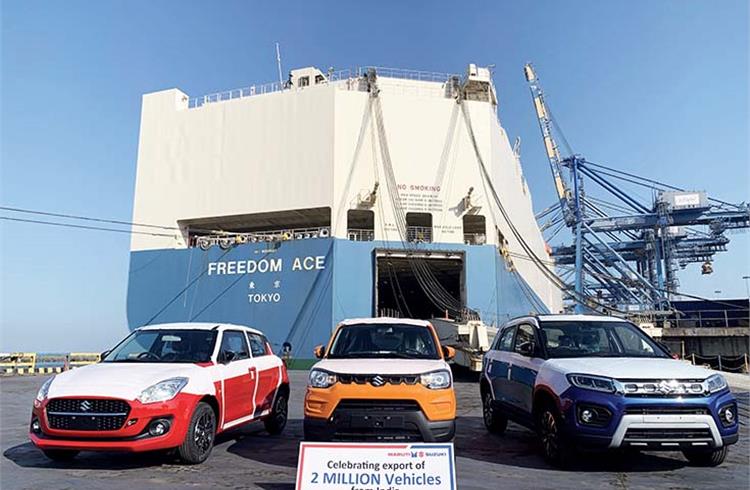 Having begun shipments of its made-in-India cars in FY1987 with a consignment of 500 cars to Hungary in September 1987, the export journey has taken all of 34 years. Thereafter, exports grew at a steady pace as new models and markets were added to the export programme. Some of the early much-in-demand export models included the Zen, the Maruti 800 and later the A-Star and the Alto.

The one-million export milestone came up in FY2013, with more than 50% of the shipments to developed markets in Europe. The 1.5-million units milestone came up on September 23, 2016. Early in 2016, Maruti Suzuki exported its Baleno, manufactured exclusively in India, to Japan, making the premium hatchback the first car to be exported from India to Japan. In FY2016, the top five exported models for the company were the Alto, Swift, Celerio, Baleno and Ciaz. Sri Lanka, Chile, Philippines, Peru and Bolivia had emerged as the top markets for Maruti Suzuki export models.

The next half-million units have come up in a little over four years with special focus on emerging markets in Latin America, Africa and Asia. Maruti Suzuki says it “has been able to gain sizeable share in markets like Chile, Indonesia, South Africa and Sri Lanka. Models such as the Alto, Baleno, Dzire and Swift have emerged as popular choices in these markets.”

Commenting on the 2-million export milestone, Kenichi Ayukawa, MD and CEO, Maruti Suzuki India, said, “The company is committed to Prime Minister Narendra Modi’s vision of Make-in-India. The 2 million vehicle exports from Maruti Suzuki are a testimony of the same. Maruti Suzuki has been exporting vehicles for past 34 years much before India became a prominent player in the global automobile business. This early global exposure helped the company enhance its quality and attain global benchmarks. Currently, we export 14 models and nearly 150 variants to over 100 countries. Vehicles manufactured at our facilities in India have found high acceptance owing to global standards of quality, safety, design and technology.”

He added, “Going forward, the company has aligned itself with the evolving needs of customers in African and Latin American nations. With a flurry of new models in pipeline, Maruti Suzuki will attract customers in new segments.”

On January 20, 2021, the carmaker began production and export of Suzuki’s compact off-roader Jimny from India. With India as a production base for Jimny, Suzuki aims to leverage Maruti Suzuki’s global production operations.