The Ertiga, which is based on the current Swift platform, is Maruti Suzuki’s first crack at the MPV segment. ShobhaMathur reports. 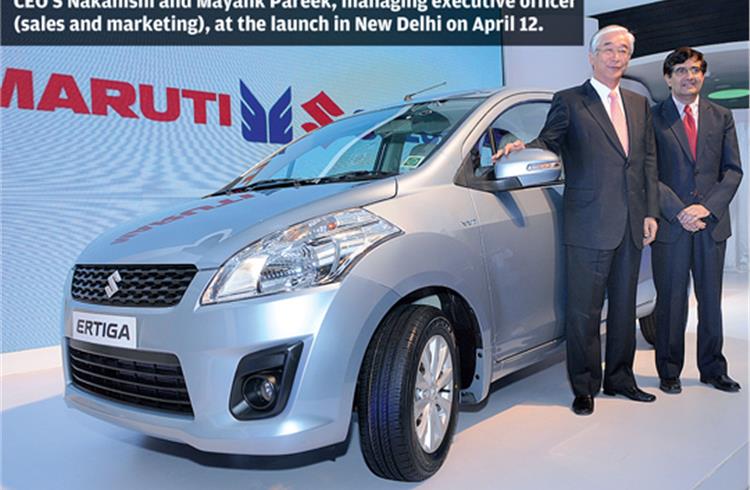 Maruti Suzuki India (MSIL) has created a new Life Utility Vehicle (LUV) segment for positioning its multi-purpose vehicle the Ertiga. The OE was till now largely absent in this utility vehicle segment that, along with SUVs, constitutes about 14 percent of the total passenger vehicle market.

With its global debut in India, the Ertiga will be a significant product for the Suzuki family and the global market, S Nakanishi, managing director and CEO, said at the launch in New Delhi on April 12. “Utility vehicles are a promising segment, and we have been largely absent from here so far. The segment has demonstrated a compounded annual growth rate of 20 percent over the last three years. We strongly believe that this trend will continue in the future as well,” he added.

To woo the young urban customer that the MPV is targeting, the Ertiga’s petrol variant carries an introductory price ranging between Rs 5.89 lakh and 7.30 lakh while the diesel variant is priced between Rs 7.30-8.45 lakh (ex-showroom Delhi). Its closest competitor, the Toyota Innova, costs Rs 9.40 lakh for the base petrol variant for the 2012 model.

The all-new Ertiga, which is based on the current Swift platform, is Maruti’s first crack at the MPV segment. The carmaker has made all efforts to make its new mini-MPV as car-like as possible and in fact the dashboard, steering wheel and underbody parts have been carried over from the Swift. And lighter materials do their part in giving the interiors a more premium look.

SIAM has already painted an optimistic picture for the Indian passenger vehicle market in FY’13 that is projected to grow at 10 to 12 percent, conditional to interest rates and fuel prices being curtailed. In FY’12, the PV market closed at 4.66 percent growth over the previous year with growth in passenger cars being a low 2.19 percent.

With exports for the Ertiga to play an important role in total sales of the MPV, MSIL has already flagged off CKD kits to Indonesia and exports to other South East Asian markets are expected to follow as the company ramps up capacity. MSIL has invested Rs 410 crore on the Ertiga project including the requirements of its 120 suppliers.

Meanwhile, the petrol variant of the Ertiga debuts the K-series 1373cc VVT K14B engine while the diesel version is powered by the 1248cc DDiS VGT engine.

With this launch, Maruti Suzuki is strengthening its K-series engine portfolio with the earlier two K-series engines being the K10 B which powers the Alto as well as the K12M. The K14B engine for the petrol variant develops 95bhp and claims to offer fuel efficiency of 16.02kpl.

The diesel-engined variant with its D13A DDiS VGT engine develops 90bhp and is expected to clock a mileage of 20.77kpl. While the LXi model weighs 1165kg, the diesel version is 75kg heavier. The baggage space in the Ertiga varies from 175 litres to 780 litres for the variants, depending on which row of seats is folded. A seven-seater, the Ertiga has three rows of seats and the second and third rows can be folded.