MAN Truck and Bus stops all ongoing projects in India

MAN Trucks India is learnt to be likely winding down its operations in the domestic market. 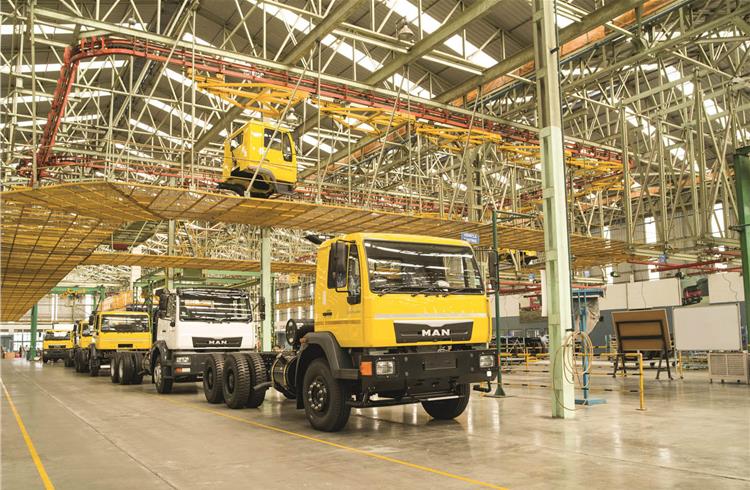 MAN Trucks India, the fully owned subsidiary of the Volkswagen Group-owned MAN Truck & Bus, is learnt to be planning to exit the Indian market. According to industry sources, the OEM could be winding down its operations within the next six months or so. Support to existing customers will continue for longer, say sources. A company spokesperson denies any such plan and says that that the situation is under review. The top management team of MAN Trucks India is currently doing some deep analyses of the Indian market and will present its proposals for further action to the board of MAN Truck & Bus.

This development follows the recent decision to shut down another Volkswagen Group brand Scania's bus manufacturing plant in India. Scania India is learnt to have outsourced its bus bodies to the MG Group, India's largest privately-owned bus building company. The brands' main parent Volkswagen Group's efforts to conserve cash and invest on new opportunities have influenced the decisions, say industry sources. However, a MAN Trucks India official says Volkswagen Group cannot be linked to the new developments at the CV OEM, decided by its immediate parent MAN Truck & Bus AG.

A MAN Trucks spokesperson, in a statement, said: "The Board of MAN Truck & Bus AG has decided to stop all on-going projects in India. The Management Team at MAN Trucks in India has been asked to review the situation and present its proposals to the Board for future steps. The team is currently reviewing the same."

MAN Trucks India has one manufacturing plant, in Pithampur, Madhya Pradesh producing trucks ranging from 16 tonnes to 49 tonnes. The plant has an annual installed production capacity of 9,000 vehicles. Currently, the plant is operating three days a week. A company official says that is due to the lean season in the tipper truck market. Over 80 percent of MAN Trucks India's sales come from tipper trucks.  The OEM had earlier stated its plan to contribute 10 percent of MAN Truck & Bus' global production by 2021-22, by when 50 percent of the production is planned to be exported.

MAN entered India through a collaboration with Force Motors in 2003. The collaboration turned into a joint venture in 2006. The JV partner's stake was bought over in 2012 for the German manufacturer to start a solo drive. According to an industry source, MAN Trucks has stalled its Bharat Stage VI projects. However, according to a company spokesperson, the BS VI projects have not been cancelled and are under review. In May 2017, the company had introduced its latest EVO range equipped with a BS-IV engine. Another source adds that the OEM has stopped purchasing components from Indian suppliers.

The commercial vehicle major has lined up new initiatives to be rolled out throughout 2018 to gain a better foothold in the Indian commercial vehicle market, dominated by Tata Motors and Ashok Leyland. Key among them are the Mobile24 initiative – a 24x7 roadside assistance services across its product offerings (trucks, buses and haulage vehicles). This will also be included in repair maintenance contracts (RMC) that can be customised to suit specific customer requirements. The MAN ProfilDrive programme is aimed at training drivers to help them operate with better safety and also improve the fuel efficiency of the vehicles.