‘Indian Citroen will lead the way on EV introduction’ 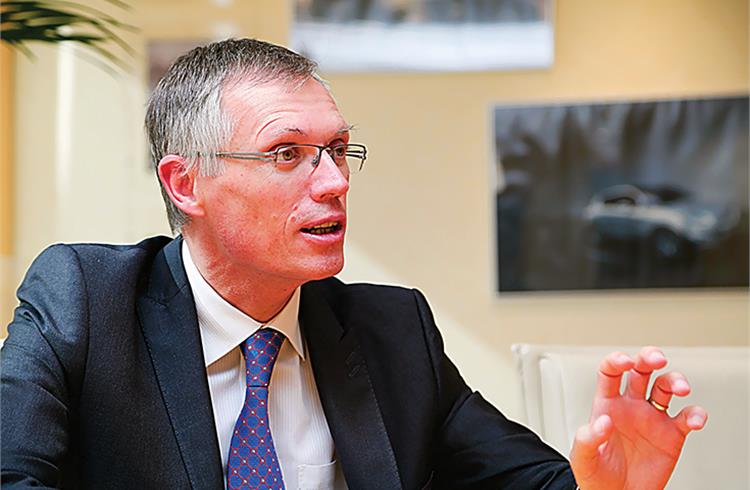 Citroen will lead the way in electric vehicles (EVs) for India next year, said Carlos Tavares, CEO Stellantis, at a virtual roundtable in Chennai on Tuesday.

“Citroen will introduce the smart car programme, it has been created under the Citroen umbrella and the EV versions are part of this programe. Specifically the Indian Citroen will be leading the way on EV introduction,” he elaborated.

Tavares said the group had decided from “Day One” that it would put an EV version in its smart car programme and the overall platform has been prepared for that objective. The fact that this has been engineered in India is testimony to the intent behind this.

“We are committed to not only bringing compact cars under four metres but also bringing EVs as people movers” continued Tavares. The plan is to bring a wide range of EVs with different body styles which include MPVs and compact SUVs.

Stellantis is the merged entity of Groupe PSA and Fiat Chrysler Automobiles (FCA) with operations in India spread across two vehicle production plants, a powertrain facility and R&D centre in Chennai and Pune. The company will focus on the Citroen and Jeep brands to power its India innings through this decade.

“We have selected Jeep and Citroen to lead our points of focus in the Indian market so that we learn everything we need to learn. The two brands are strong opportunities. Jeep has been extremely successful around the world in terms of using electrified powertrains that we label 4xe,” said Tavares. According to him, Jeep would transition “between now to cut to a few years from PHEV to pure EV.”

Tavares admitted that there were a lot of challenges to reckon with while planning out the EV roadmap in India. “If we want to bring zero emission mobility devices, we need to make sure that the full lifecycle analysis is clean which means we need to take care not only about the mobility device but also the energy,” he said.

The second challenge was to ensure that the EVs are affordable especially for the large middle-class customer base in India. This is “still something that needs a lot of work” not only as a company but as an industry to make this happen.

Sales figures from all over the world show a “significant gap” between EVs and conventional technologies “reflecting the fact” that an EV is 40 to 50 percent more expensive in total production cost. “If we transfer this entire amount to the final customer, they would not be able to afford EVs which would not reduce environmental emissions,” said Tavares.

For now, sourcing batteries from India “doesn’t seem to be possible” but in the event it does emerge a reality in the near future, Stellantis will sourcing batteries and battery cells form here for the rest of the world. “We believe sourcing from India is always a better position. If that were to happen, we would achieve nearly 90 percent of localisation in Chennai,” he added.

Tavares reiterated that the full power of Stellantis would be leveraged for India given that it was a much bigger entity than a standalone PSA or FCA. “Now we are together, we are one single company acting in a very aligned way. It is one single company, one single family and one single plan till 2030. So things are more exciting than ever because this powerful family is now executing a great plan for the company,” he said.