The app provides information regarding the average waiting time at the CNG station and also alternative nearby CNG station to the customers. 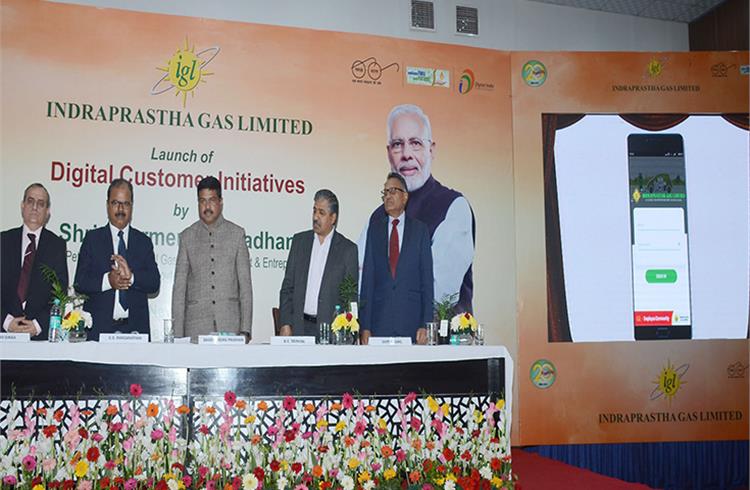 The minister announced that by February next year, CNG buses using Type-IV cylinders will be running between Delhi-Chandigarh, Delhi-Agra, Delhi- Haridwar and Delhi-Jaipur.

Lauding the initiatives of IGL in introducing QMS, Pradhan said, “It would tackle the problem of long queues at CNG stations, save time and check the wastage of fuel for waiting vehicles. This will improve the quality of life and enhance the income of the vehicle drivers using CNG as fuel.” He said that there are 1500 CNG stations in the country, including 450 in Delhi. He further added that the number of CNG stations in the next 4-5 years is likely to go up to 10,000.

The CNG Queue Management System through the ‘OORJA’ mobile application would provide information regarding the average waiting time at the CNG station and also alternative nearby CNG station to the customers. The customers would know the waiting time for three broad categories i.e. Buses, Cars and Autos. They will also be able to see CNG stations nearby and the waiting time for three categories of vehicles. This application would be available through invitation initially for ten days and would be available for download from January 1, 2019.

The technology platform—Social CRM will address customer queries, complaints, service requests, grievances on various social media platforms, such as facebook, twitter and Instagram. This can be used to effectively view and monitor the grievance redressal process by using the sentiment analysis.

IGL also marked the crossing of one million domestic PNG (Piped Natural Gas) customers in its areas of operation such as Delhi, Noida, Greater Noida, Ghaziabad and Rewari.