Known as the Hyundai Ai3 CUV, it will compete with entry-level compact SUVs. 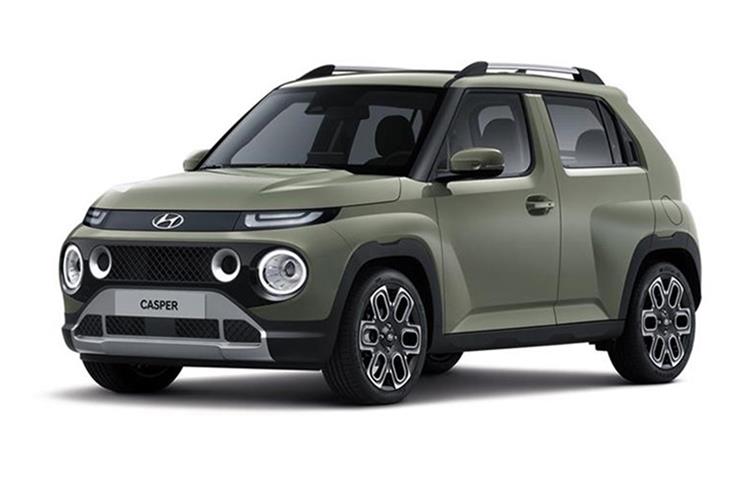 Hyundai will launch an all-new entry-level SUV in India. This new SUV will positioned below the popular Venue compact SUV and will go on sale in the 2023 festive season.

New Hyundai entry-level SUV: what is it exactly?
This new model, codenamed Hyundai Ai3 CUV will be the brand’s take on the likes of entry-level compact SUV contenders like the Tata Punch, the Renault Kiger and the Nissan Magnite. This entry-level SUV has been a part of numerous studies since 2016-17, mooted under its erstwhile MD Y K Koo. The project was finally given a go ahead just before the COVID-19 pandemic.

The new entry-level SUV is being positioned as a Compact Utility Vehicle (CUV) and will be slightly bigger than the Casper, which is on sale in some international markets. It will use the same platform that underpins the Grand i10 Nios and the Aura compact sedan.

New Hyundai entry-level SUV: powertrain options, positioning
The company may restructure the variant mix of the Grand i10 at the bottom of the range and the Venue SUV at the top to create space for the sub-compact SUV. The Ai3 CUV is likely to share the same 1.2-litre petrol powertrain as the Grand i10 and Aura, but the decision on a CNG variant is yet to be taken.

There is no word on its price yet, but it's likely that it will be pitted against the Punch, which is the bestselling product in this sub-segment of compact SUVs.

According to several people in the know, the company has planned for an annual production of 50,000 units for this model, and to make way for it, Hyundai Motor India had also invested close to Rs 1,470 crore to expand its plant capacity from 7.7 lakh to 8.5 lakh units in the last financial year.

Many first time car buyers are veering towards SUVs – over a hatchback – and within a short span of 18-24 months, entry-level SUVs are selling about 20,000 units a month between the Tata Punch, Renault Kiger, Nissan Magnite and Citroen C3. This segment already accounts for 10 percent of the growing utility vehicle segment in the country.

The production plan of Hyundai appears rather modest and indicates how the South Korean carmaker is keen to focus on profitability over market share.

An email sent to Hyundai Motor India seeking official comment did not elicit any response.