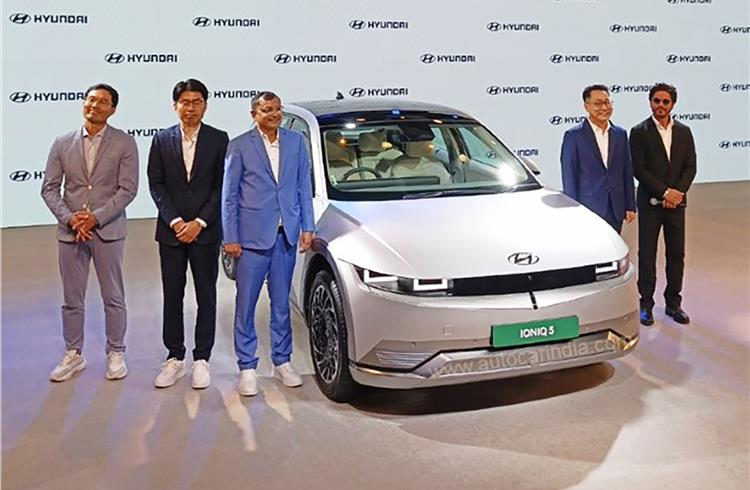 At Auto Expo 2023, Hyundai Motor India finally launched the Ioniq 5 crossover at an introductory price of Rs 44.95 lakh (ex-showroom) for the first 500 customers. This makes it Rs 16 lakh cheaper than its cousin model – the Kia EV6. The Ioniq 5 is Hyundai’s second electric offering for India after the Kona EV, which has been on sale here since 2019. Bookings for the crossover are already underway for Rs 100,000.

The Ioniq 5 was first previewed as the 45 EV concept at the 2019 Frankfurt Motor Show, and the final production model heavily draws inspiration from the retro-futuristic design language of the concept.

The retro look of the Ioniq 5 features sharp lines, flat surfaces and SUV-ish stance, but with highly raked windscreens. The headlights and tail-lights get a unique pixelated look and the 20-inch aero-optimised wheels feature a turbine-like design. Hyundai is offering the Ioniq 5 in three paint shade – Gravity Gold Matte, Optic White and Midnight Black Pearl.

The Ioniq 5’s interior is minimalistic – it gets a flat floor, flexible seats and a movable centre console. Hyundai has used fabrics made from recycled plastic and eco-friendly leather for upholstery.

In terms of equipment, the Ioniq 5 gets a pair of 12.3-inch screens for the instrument cluster and touchscreen, heads-up display with augmented reality functions and ADAS tech. Additionally, it gets vehicle-to-load function with an output of 3.6kW, which can power-up electrical appliances like laptops and mobiles. This function can be used via two ports – one located under the rear seats and another outside the car, near the charging port.

The Ioniq 5 is powered by a 72.6kWh battery, which will give it an ARAI-certified range of 631km on a single charge. The Ioniq 5 is available only in rear-wheel-drive configuration, with its electric motor producing 217hp and 350Nm of torque. The Ioniq 5 is also capable of supporting superfast 800V charging, which can charge the battery from 10 percent to 80 percent in just 18 minutes.

The Ioniq 5 is assembled in India, unlike its cousin the Kia EV6, which comes here as a full import. It costs less than the EV6 due to the difference in customs duty between a completely built-up unit (CBU) and a completely knocked down (CKD).