Honda is currently studying market feasibility for the new WR-V in India, according to sources. 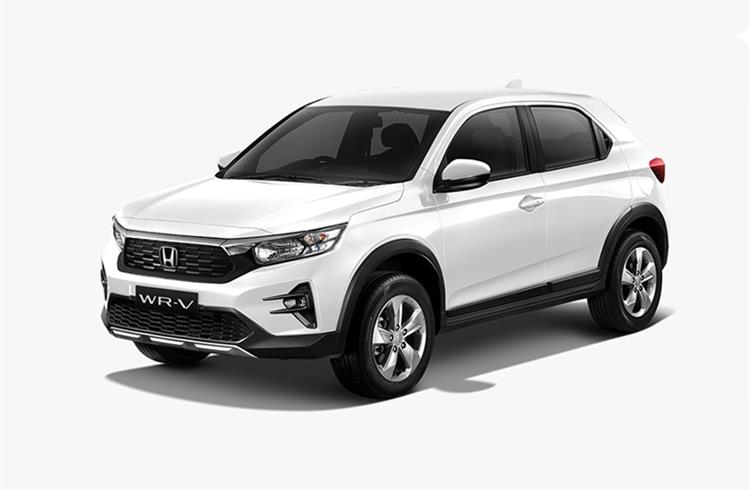 Honda has showcased the all-new WR-V SUV in Indonesia. The new Honda WR-V gets unique design and is more of an SUV than a cross-hatchback like its predecessor.

A production version of the Honda Concept RS SUV, the new Honda WR-V features fresh looks and styling cues that are shared with bigger Honda SUV’s like the HR-V and even the CR-V that are sold overseas. The new Honda WR-V sits the platform which underpinned the previous-gen City and the latest Amaze which is sold in India.

A strong styling resemblance from the Honda RS SUV concept is evident on the WR-V. Honda’s latest SUV gets stylish angular wraparound headlamps with the grille neatly blending with the front bumper. The bumper features a simple design with a wide airdam.

The overall design of the new WR-V is more coupe SUV like, with a tapering roofline and an angular tailgate design. The glasshouse is large with a steep raked front and rear glass (for an SUV). It also gets a prominent shoulder line and chunky body cladding on the lower part of the doors with the wheel arches housing large alloy wheels (16-inch or 17-inch depending on variant).

It gets a prominent C-pillar that complements its raked rear tailgate design. At the rear, the new WR-V SUV features slim horizontally positioned LED tail-lamps. The bumper is chunky and houses the license plate enclosure and a faux skid plate.

The Honda WR-V gets two styling packages, the WR-V E with simpler cues and 16-inch alloy wheels and a sporty WR-V RS that will have sportier looks with 17-inch alloys, red accents on exterior and interior, new grille, all-black interiors and other unique bits. It will also have dual-tone exterior paint schemes. The WR-V features analogue dials with a 4.2-inch MID. It also get remote engine start and AC on feature in higher variants.

If you find the Honda WR-V’s interior looks familiar then you are not wrong.  Honda has lifted almost the whole interior bits for the WR-V from the Amaze sedan that we get in India. The dashboard, infotainment screen steering wheel, controls and even the seats seem to be same as the Amaze.

Power comes from a 1.5-liter petrol engine good for 121hp and 145Nm of torque. Gearbox duties are carried over by a five-speed manual or a CVT gearbox. This is the same engine that sees duty on the Honda City sedan in India.

As reported by us earlier, Honda is readying an all-new SUV for our market which will rival the likes of the Creta, Seltos, Grand Vitara and the Hyryder in India. This new SUV will be around 4.2-meters long and will sit on the fifth-gen City platform as opposed to the older fourth-gen City architecture on which the new WR-V shown today is based on.

As far as an India entry for the new WR-V is concerned, this new SUV, according to sources is “under study” for the Indian market and may come to India post the launch of Honda’s Creta rival which is slated to hit Indian showrooms just ahead of festive sea