The e-scooter, currently in advanced stage of development, will be manufactured at Chittoor plant in Andhra Pradesh. 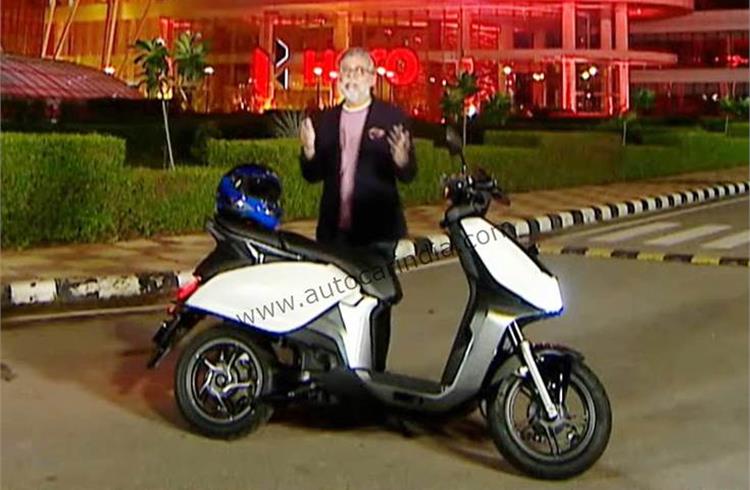 The world’s largest two-wheeler company has officially confirmed its entry into the electric vehicle market. The company had given a first glimpse of its electric scooter in August this year.

Hero MotoCorp has, in a statement yesterday, said work is underway to launch its first EV by March 2022.  The electric scooter is undestood to have been co-developed at its R&D centres in Germany and CIT, Jaipur.

Hero MotoCorp, which says it is accelerating its focus on producing EVs as an integral part of its product portfolio, clearly aims to become future-ready and stay relevant in the shift from ICE to EVs. It’s something leading ICE two-wheeler OEMs like Bajaj Auto and TVS Motor Co are also doing.

As per Hero MotoCorp, its EV project is in an advanced stage of development and the product will be manufactured at its plant in Chittoor, in the southern Indian state of Andhra Pradesh. The plant, called Garden Factory for its eco-friendly and sustainable manufacturing practices, will provide an integrated ecosystem for battery pack manufacturing and testing, vehicle assembly and vehicle end- of-line Testing (EOL).

The Andhra Pradesh plant, located in the Chittoor district, is the youngest and began operations in March 2020. Developed over a 600-acre site, it will have an annual installed capacity of 1.8 million units, which will be achieved in three phases. Hero’s combined installed production capacity at 11.5 million units, is currently the highest in the country. The company also has two assembly plants overseas: one each in Colombia and Bangladesh.

It is to be noted that the company is also working on other projects including battery swapping technology with Gogoro of Taiwan. In April 2021, Hero MotoCorp had inked a strategic partnership with Gogoro to develop the EV and charging network in India..

While Hero MotoCorp has not revealed any details about its first EV, the photo teaser from August indicates a 12-inch wheel at the front and a 10-inch unit at the rear. The rear wheel also doesn’t appear to have a hub-mounted motor. Interestingly, it is also equipped with a single-sided swingarm, similar to the Bajaj Chetak. This is unlike the conventional double-sided ones found on Gogoro EVs in Taiwan. Hero’s electric scooter also doesn’t share any major styling elements with the Gogoro electric scooters, and it appears as if this is in fact an indigenous Hero MotoCorp product. Other neat design elements include the flyscreen, curvy bodywork and lengthy split-seat.

Hero’s growing presence in EVs
Hero MotoCorp, as is known, is one of the lead investors in the Bangalore-based electric scooter maker Ather Energy. The company, which has been a part of Ather’s growth story since 2016, currently has nearly 35 percent of shareholding in the EV maker. Hero MotoCorp, which first invested in the Bangalore-based EV start-up in October 2016, in Series B funding, and invested Rs 84 crore more in July 2020 to hike its stake in Ather to 34.58 percent, invested $12 million (Rs 89 crore) as a part of the Series D round in November 2020.