With the Activa in an unassailable position, the fight is on for No. 2 position between the Hero Maestro and TVS Jupiter. 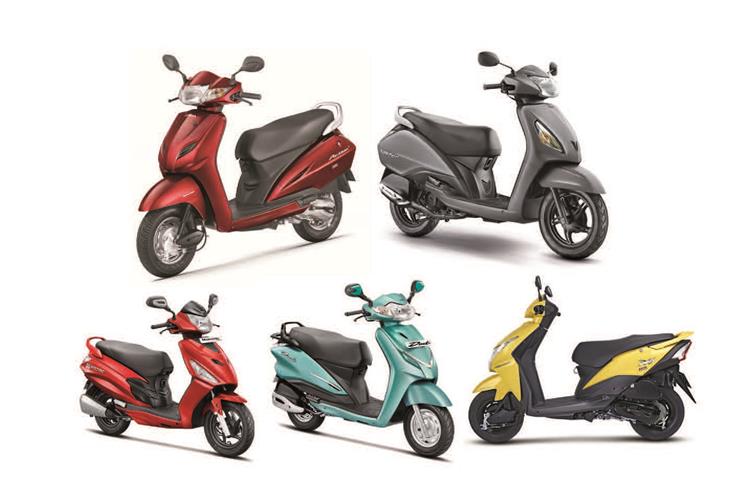 The top three best-selling scooters in India have undoubtedly been the Honda’s Activa family and Hero MotoCorp’s and TVS Motor Company’s Activa rivals – the Maestro and the Jupiter – all primarily competing in the 110cc scooter segment.

The popular Honda Activa leads its competitors with an insurmountable position in the market selling at least four to five times (for any average month) of the sales of the second best-selling scooter – a position for which the Hero Maestro and TVS Jupiter wrestle every month.

At number two position was the TVS Jupiter, which recorded sales of 51,768 units last month. The Hero Maestro, which stood at the third position, clocked sales of 35,672 units in November 2015. Notably, in October 2015, the Hero Maestro had ranked second (with sales of 65,786 units) and the TVS Jupiter (with sales of 61,345 units) stood at the position of third best-selling scooter in India.

Hero MotoCorp’s all-new single-cylinder, 110.9cc Duet scooter, which comes with a metal body just like the most popular Activa model, has remarkably risen to the fourth position in the best-selling scooters list for November 2015. The company recorded total sales of 18,240 units of the Hero Duet scooter variants last month.

This model first made its way into the top 10 scooters list in October 2015 when it grabbed the eighth position with reported sales of 12,763 units for that month. Interestingly, while the company had launched the Maestro Edge and unveiled the Hero Duet by September end, the latter model was commercially launched on October 28. This highlights the instant popularity that Hero’s new family scooter received from the masses even before its launch, and also the ever-increasing market potential of the scooters as a preferred choice of commuting.

At the fifth position is Honda’s Dio that is popular among the young school and college-going crowd across the urban cities. The company sold 17,090 units of the Dio models in November 2015.

India Yamaha Motor’s best-selling scooter model Fascino continued to occupy the sixth rank with total sales of 13,078 units in November 2015. The model, which ranked sixth in October as well, had sold 19,979 units in that month. It is interesting to see that Yamaha’s overall sales for the two months – October and November 2015 – have seen a massive fluctuation. The company that recorded its highest ever monthly sales in India in October (70,812 units) registered a month-on-month decline of around 40 percent in November 2015 (42,718 units).

The seventh and eighth positions were held by the Suzuki Access and Hero Pleasure that sold 12,959 units and 12,387 units respectively last month.

Mahindra’s latest 110cc scooter Gusto that entered into the top 10 selling scooters list for the first time in September 2015 (first reported by Autocar Professional) has again grabbed a slot in the list for November. The only model from the stable of Mahindra’s two-wheeler division to make its mark in the elite list of scooters held the ninth spot with total sales of 8,646 units for the last month. 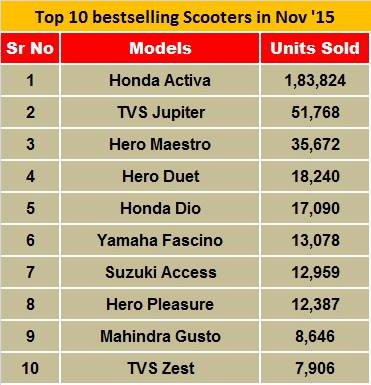