The company’s acquisition of a stake in a software start up is aimed at putting in the building blocks for a significant play in the EV segment including grid management. 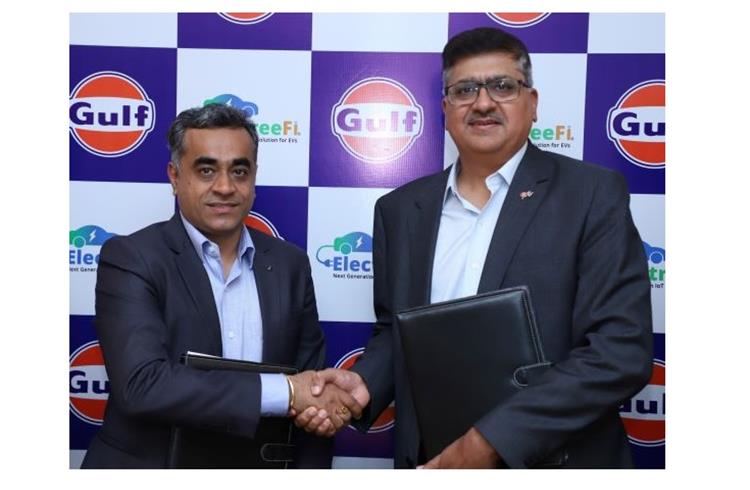 Gulf Oil Lubricants India, part of the Hinduja Group, is working on a plan to enter the e-mobility value chain. The Mumbai-based company which gets counted amongst the top lubricant players in India recently announced that it is making a 26 percent acquisition, valued at around Rs 14.5 crore- in Delhi based Techperspect Software, a startup also known as ElectreeFi.

Ravi Chawla, the company’s MD & CEO said the alliance with ElectreeFi has been designed to leverage its around 100,000 pan-India touchpoints as well as relationships with automotive OEMs and industrial customers to provide an entire spectrum of solutions to the B2B as well as B2C customers. The company will also leverage synergies with other Hinduja Group companies such as UK-based Switch Mobility, Ashok Leyland and OHM Global Mobility in India as well as in global markets, he said.

The acquisition of a stake in ElectreeFi is Gulf Oil's second foray into the green mobility eco-system
In February 2021, the company entered into an agreement with Gulf Oil International (GOI) to participate and co-invest in government’s recent investment along with the Clean Growth Fund (CGF) in Indra Renewable Technologies, a UK-based Electric Vehicle (EV) and smart energy technology company developing charging and energy storage solutions for home and commercial use. Gulf Oil invested around Rs 15 crore for 7.5 percent strategic stake in Indra Renewable which is a manufacturer of chargers for cars. Explaining the rationale, Chawla says the company is building an ecosystem by picking up stakes in niche companies in those sectors which can “help us on a longer-term basis". The company is clearly looking to create synergies between the hardware and software of the EV business on which it can deploy software solutions on data usage at its all-India touchpoints.

SaaS as EV lifeline
So what is in ElectreeFi, which attracted Gulf Oil towards it in the first place when there are several other established SaaS companies in the e-mobility space? Gulf Oil executives, on their part point out that the answer is in ElectreeFi's success in working with OEMs of all kinds in the EV ecosystem including those manufacturing vehicles, chargers, batteries, amongst others.

The country’s SaaS platform provider counts the top five EV OEMs as its clients, cornering nearly 40 percent in the four-segment alone. The company is believed to be at different stages in discussions with almost all the major players already or looking to board the EV bandwagon which includes TVS Motor, Hero MotoCorp, Honda Motorcycle & Scooters, Ola Electric, Bajaj Auto, Maruti Suzuki, Hyundai, Kia, Audi, Mercedes and MG amongst others. In fact, MG Motor India has recently announced setting up around 1000 electric chargers in as many days in residential housing societies and other locations with a white label application being provided by ElectreeFi.

In addition to it, many of the country's largest charge points, swap station operators, battery OEMs, already make use of ElectreeFi platform. In terms of numbers, the platform currently boasts of close to 1900 EV charging points (public, captive, home charging) resulting in 1000 EV charging transactions daily with over 4000 electricity units consumption per day. ElectreeFi is also said to be in talks with Jio-bp, a JV between Reliance Industries and British Petroleum which plans to open 5500 fuel retail outlets.

According to Sumit Ahuja, Director (Business & Strategy) and Co-founder at Techperspect (ElectreeFi) while B2B sales currently remains in focus, the bigger shift will happen when the company starts a subscription model for B2C format. " We already have 25-30k EV users who have used our platform. When this number reaches between 100,000 and 150,000, we will start commercialising our B2C operations" Ahuja told Autocar Professional.

ElectreeFi's penetration into vehicle OEMs importantly should be seen in the context of the ambition and investments being made by these companies in the EV segment. ElectreeFi is already said to have completed a successful pilot with Maruti Suzuki in the EV charging domain after having been selected amongst the 500 startups.

Likewise, Hero MotoCorp, the country's largest manufacturer of ICE motorcycles is looking to launch its 'Vida' brand of its first ever electric two-wheeler by setting up of two greenfield plants in West and South at an expected cost of around Rs 1500-2000 crore and with capacity to roll out 50 lakh e-2W annually. Further, the company has also invested in Bengaluru- based Ather, apart from collaborating with Taiwanese firm Gogoro to enable it to set up battery swap stations in the country.

Ahuja emphasised that while there is a huge market remaining to be captured in India and abroad in the context of the EV ecosystem, however, the bigger game will be to eventually get into power management.  " If a certain kW of electricity is charged from your system we get a percentage of it. That is the model we are looking at. Once that starts, a company of our size will be Rs 8-10 k crore in next 10-12 years. As opportunity is not only in India but worldwide" he continued.

The funding from Gulf Oil has also helped ElectreeFi in hiring desired talent for its upcoming R&D in artificial intelligence and machine learning. At present the company has a staff strength of around 20 employees in addition to 6-7 consultants.

Given that demand for lubricants from segments such as buses, trucks and other heavy vehicles will take time for transition, experts believe that India’s lubricants industry will log at a CAGR of 2-3 percent for the next 15 to 20 years. This gives an approximate timeframe for Gulf Oil to prepare itself for impending change to a EV oriented eco-system. For Gulf Oil, an area of impact will come primarily from its two-wheeler segment as it does not have much presence in the three-wheeler segment. Further, 95 percent of its revenues comes from the replacement market, with just 5 percent coming from the new vehicles.