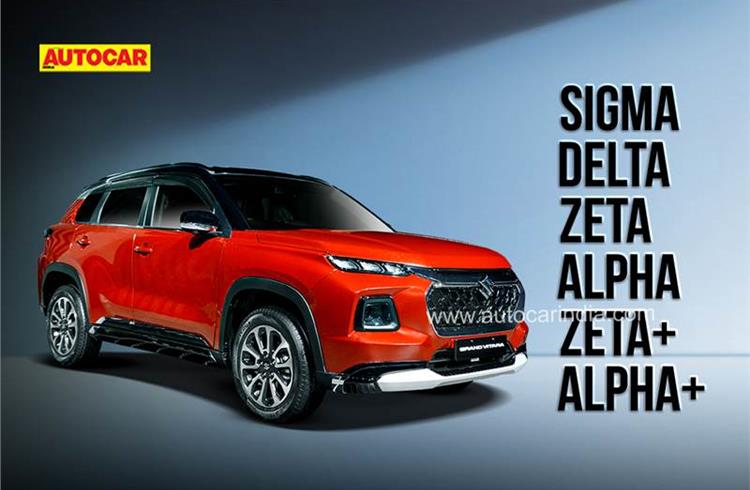 Almost 54 percent of the 13,000 pre-bookings that Maruti Suzuki has received for the Grand Vitara are for the two strong-hybrid variants – Zeta+ and Alpha+ CVT. The company had commenced bookings of its 4.3-metre-long SUV on July 11.

While diesel still commands a dominating 51 percent share of the total industry volumes in this segment, clocking 540,000 units last year, the Japanese carmaker is relying on its in-house hybrid technology, as well as that sourced from alliance partner Toyota, to offer good fuel economy even as premium car buyers too look to minimise operating expenses.

The model will be sold in both domestic as well as export markets and comes with two petrol-only powertrains, and will take on the likes of the Hyundai Creta, Kia Seltos, Volkswagen Taigun, Skoda Kushaq, MG Astor as well as the Nissan Kicks.

While the actual price announcement, expected in end August, might just turn things in favour of the mild-hybrid variants, with more than 7,000 bookings for the strong-hybrid technology, Maruti is confident that the Grand Vitara will herald the large-scale adoption of full hybrids in India.

“These are the initial booking numbers. People haven’t seen the vehicle, and the price is not yet known, but the bookings are based on what is out there in the public and people’s trust in our brand“, says Shashank Srivastava, senior executive director, Marketing and Sales, MSIL.

Price disadvantage for strong hybrid
Pricing the Grand Vitara’s strong-hybrid variants reasonably will present a challenge for MSIL. The mild-hybrid that also does duty on the XL6 and the newly-launched Brezza, has been localised in India, with its lithium-iron-phosphate-type or LFP battery made at the Toyota Denso Suzuki battery plant in Gujarat while Toyota has imported its strong-hybrid setup, including the petrol engine.

The company, however, aims to increase its 4 percent market share in the midsize SUV segment, and expects a 10 percent compounded growth of the segment over the coming few years.

The new Grand Vitara comes in a total of 10 variants, across the two powertrain options. The 8 ‘Smart Hybrid’ trims feature Suzuki’s 1.5-litre, K-series, four-cylinder, Dual Jet petrol engine that comes paired with a mild-hybrid system equipped with a 72Wh battery that offers power assist to the engine during acceleration, and stores regenerated energy while braking. While this engine comes mated to a 5-speed manual or a 6-speed automatic transmission option, the other offering is a Toyota-sourced, 1.5-litre, three-cylinder petrol mill that comes mated to a strong-hybrid system.

The strong-hybrid technology, christened as ‘Intelligent Electric Hybrid’ by MSIL, offers a full-EV mode with its 0.76kW lithium-ion battery pack placed in the boot powering an electric motor driving the front wheels through an e-CVT drivetrain. The Lithium-Nickel-Manganese-Cobalt-Oxide-type or NMC battery in this application can run the car in full-EV mode for 40 percent of the distance, or 60 percent of the vehicle’s time on the road, depending upon the charge. There’s only an e-CVT option in the two strong-hybrid variants on offer.