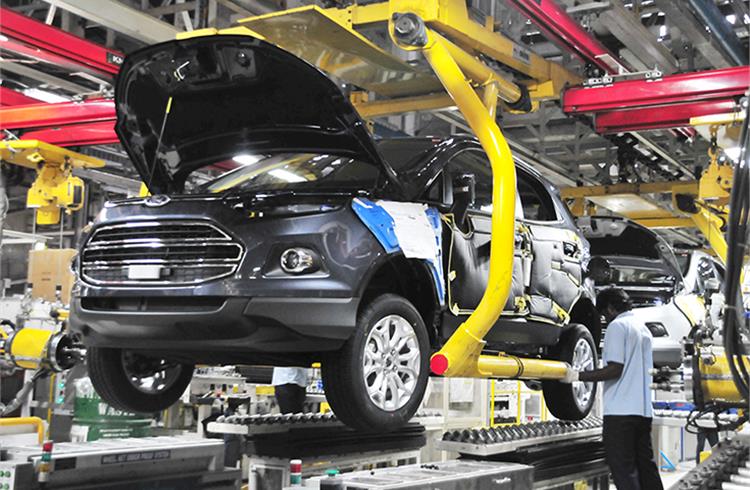 On WorldEV Day, American carmaker Ford has announced it is stopping manufacture of vehicles for sale in India immediately.

The decision to stop manufacturing operations in India follows accumulated operating losses of more than $2 billion (Rs 14,802 crore) over the past 10 years and a $0.8 billion (Rs 5,921 crore) non-operating write-down of assets in 2019, the restructuring is expected to create a sustainably profitable business in India.

Ford India;s two plants (Plant 1 in Chengalpattu, Chennai, and Plant 2 in Sanand, Gujarat) together have a combined manufacturing capacity of 440,000 units. The Sanand engine plant (which will continue making engines) has an engine production capacity of 610,000 units per annum.

Looks to maintain presence in engines and engineering
Ford says it will focus on growing its Ford Business Solutions capabilities and team in the country, as well as engineering and engine manufacturing for export. With more than 11,000 team members currently in India, Ford Business Solutions plans to expand to provide more opportunities for software developers, data scientists, R&D engineers, and finance and accounting professionals, in support of the Ford+ plan to transform and modernize Ford globally.

More than 500 employees at the Sanand Engine plant, which produces engines for export for the Ranger pickup truck, and about 100 employees supporting parts distribution and customer service, also will continue to support Ford’s business in India.

Ford says it will begin importing and selling some of its models including the Mustang coupe as well as all-new hybrid and fully electric vehicles, such as Mustang Mach-E. Sales of current products such as Figo, Aspire, Freestyle, EcoSport and Endeavour will cease once existing dealer inventories are sold. Ford will continue full customer support operations for these vehicles with service, aftermarket parts and warranty coverage.

After Brazil, India
It can be said the writing was on the wall for Ford's car manufacturing operation in India. In January 2021, the company pulled out of the Brazilian market, stopping manufacturing after all of 101 years.

“As part of our Ford+ plan, we are taking difficult but necessary actions to deliver a sustainably profitable business longer-term and allocate our capital to grow and create value in the right areas,” said Jim Farley, Ford Motor Company’s president and CEO.

“Despite investing significantly in India, Ford has accumulated more than $2 billion of operating losses over the past 10 years and demand for new vehicles has been much weaker than forecast. “I want to be clear that Ford will continue taking care of our valued customers in India, working closely with Ford India’s dealers, all of whom have supported the company for a long time. India remains strategically important for us and, thanks to our growing Ford Business Solutions team, will continue to be a large and important employee base for Ford globally.”

Anurag Mehrotra, president and managing director of Ford India, added: “Ford has a long and proud history in India. We are committed to taking care of our customers and working closely with employees, unions, dealers and suppliers to care for those affected by the restructuring.”

Ford India says it took these restructuring actions after investigating several options, including partnerships, platform sharing, contract manufacturing with other OEMs, and the possibility of selling its manufacturing plants, which is still under consideration. “Despite these efforts, we have not been able to find a sustainable path forward to long-term profitability that includes in-country vehicle manufacturing,” Mehrotra said.

“The decision was reinforced by years of accumulated losses, persistent industry overcapacity and lack of expected growth in India’s car market.” Approximately 4,000 employees are expected to be affected by the restructuring. Ford will work closely with employees, unions, suppliers, dealers, government, and other stakeholders in Chennai and Sanand to develop a fair and balanced plan to mitigate the effects of the decision. Ford India will maintain parts depots in Delhi, Chennai, Mumbai, Sanand and Kolkata and will work closely with its dealer network to restructure and help facilitate their transition from sales and service to parts and service support. Ford India will maintain a smaller network of suppliers to support engine manufacturing for exports and will work closely with other suppliers to ensure a smooth wind-down of vehicle manufacturing. Ford also will continue to rely on India-based suppliers for parts for its global products, and suppliers and vendors supporting Ford Business Solutions will continue to support the business as normal," said the company statement.