While the Eicher Pro 6049 tractor-trailer addresses applications in the 6x4 tractor category, the Pro 6041 is India’s first 41-tonne rigid truck 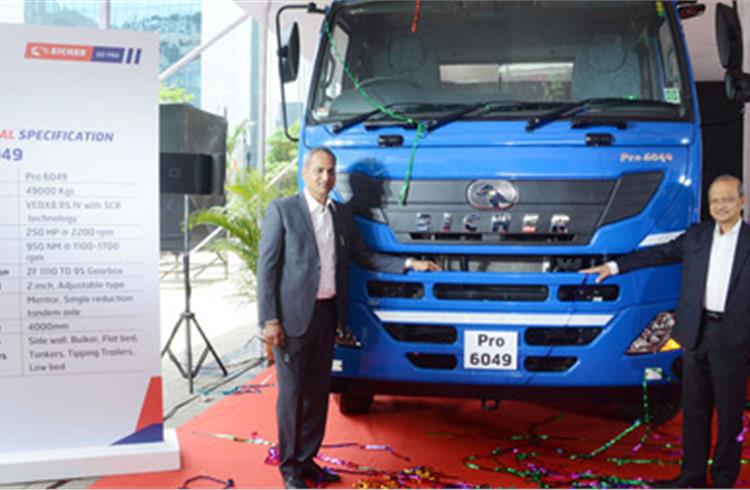 The new Eicher Pro 6049 tractor-trailer, which addresses the mass market for a variety of applications in the 6x4 tractor category, is designed to deliver optimum performance and peak power at 250hp. It deploys the VEDX BS IV SCR engine, newly designed ergonomics and robust Eicher aggregates for best-in-class fuel efficiency.

The Eicher Pro 6041 is India’s first 41-tonnage rigid haulage truck and offers a payload advantage of 3.5 tonnes over a 37-tonnage truck. The vehicle is powered by the VEDX8 engine, which develops 250hp and 950 Nm torque, claimed to be the highest power and torque combination in its segment. The Pro 6041 is also the first vehicle in its segment to get an overdrive gearbox for higher top speed and better mileage.

Commenting on the new products, Vinod Aggarwal, MD and CEO, VE Commercial Vehicles, said, “The commercial vehicle industry in India is very dynamic and going through a lot of transformation with migration to more productive and higher tonnage trucks. With the implementation of GST and better road infrastructure, this migration is only going to become more pronounced.”

The investment could be scaled up to Rs 600 crore depending on the conditions and requirement, which will see the company set up a new manufacturing unit with an announcement expected in the next two months and additionally towards upgradation for BS VI engines. As the company already manufactures Euro 6 compliant engines, the transition towards BS VI will not be a problem. In fact, the company states that the introduction of new safety norms, BS VI, and other factors will drive demand for manufacturers who offer premium-products and thus will translate to improved sales.

Being the first in the industry to commercially launch the 41-tonne truck, it sees demand to be driven by infrastructure development and fleet transporters for the new product. It claims that the product which brings state-of-the-art technology including a superior engine, cruise control, telematics (as a standard) and driver comfort among others that will see a wider adoption.