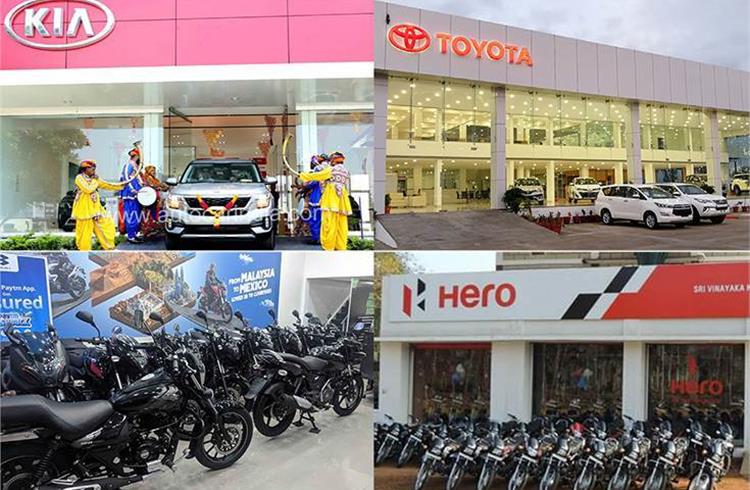 After a second bout of lockdowns spanning almost three months from April through to June, automotive retail showrooms in India are back in action, what with most states lifting curbs.

While close to 90 percent of vehicle dealerships across the country have fully resumed sales and service operations with conformation to Covid safety guidelines, showrooms in states like Kerala, Andhra Pradesh, Orissa and Jharkhand, which form about 8-10 percent of India's automotive retail population, continue to remain partially or fully shut.

It is estimated that there are over 15,000 automobile dealers with 26,500 dealerships across India together employing around 4 million people at showrooms and service centres. With 90 percent of them back on duty, it means around 23,850 dealerships are open for business.

"In Orissa and Jharkhand, where there are operational timing restrictions, dealerships are only opening for customer deliveries and not particularly for business," said Vinkesh Gulati, president, Federation of Automobile Dealers Associations (FADA).

According to Gulati, despite recommencement of operations, things are far from normal. "If we compare the scenario with June or July of CY2020, maybe we are slightly better off, but business is still not like what it was before the pandemic."

"The rate of fresh bookings has slowed down, which clearly shows the demand situation in the market. However, when almost all dealerships open by next month or end-July, things should improve substantially," he added.

In this phase of tough business environment, the FADA president is pleased about the government's recent move to classify all retail and trade operations in the country as MSMEs (Micro, Small and Medium Enterprises).

"While automotive retail was considered a part of MSMEs until 2017, it was only restricted to vehicle service and two-wheeler retail after that," said Gulati.

On July 2, the Minister for Micro, Small and Medium Enterprises of India, Nitin Gadkari had made the announcement which now brings passenger vehicle retail, spare part trading, tractors, off-highway vehicles and commercial vehicle retail to be counted as MSMEs.

"This makes automotive dealers open to a lot of benefits and subsidies offered by different states for MSMEs," pointed out Gulati.

The benefits, for instance, include subsidies on buying land from state industrial development corporations, as well as priority lending from banks at lower interest rates.

The FADA president signed off by saying, "Given the business scenario with the pandemic, these kinds of support measures come as a big relief to the entire automotive retail fraternity.”