Daimler Truck gets off to a good start in 2022 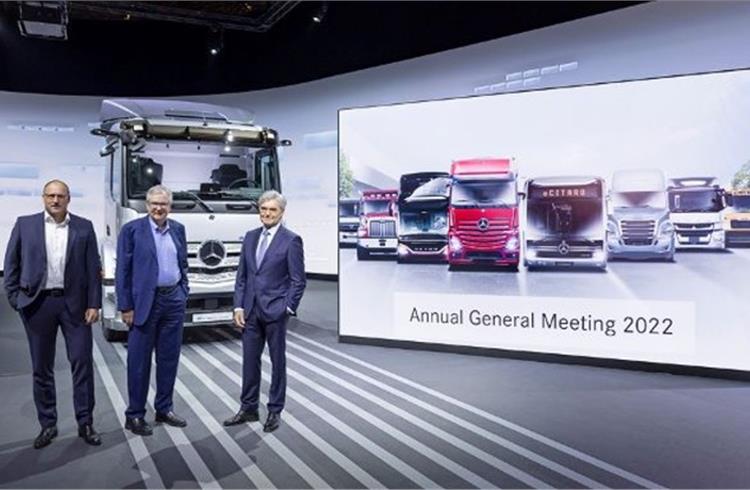 In its first meeting as an independently-listed company, Daimler Truck Holding AG said that in its first year of independence, despite major external uncertainty, it has been able to pursue its clear strategy to maximise its earnings potential in order to master the technological change toward emission-free, safer and automated driving.

Despite ongoing supply chain restraints, it said it has managed to continue the positive development from 2021 and started 2022 with growth in unit sales, revenue and EBIT (adjusted). The company was able to increase its Group unit sales significantly year-on-year to 109,300 units in Q1 of the new year (+8 percent). Group revenue rose by 17 percent to €10.6 billion.

The company said it continues to see a strong demand environment. Around 139,000 units mark a high level of order intake in Q1 of 2022, the company said in a press note. The order backlog continues to grow, reaching a record level and illustrating the strong confidence customers have in the company’s products. Adjusted EBIT increased by 11% to €651 million.

In its outlook for 2022, the company said it assumed that overall macroeconomic conditions would be favourable to global CV demand. Daimler Trucks expects unit sales of between 500,000 and 520,000, and revenue on group level to be between €48.0 to 50.0 billion. It said demand for the products and services remains strong and there are signs of slow improvements in the company’s supply chain.  It said the outlook considers all currently known effects of the Russia/Ukraine war and the semiconductor shortage. However, the outlook is subject to the further development of the war and its impact on the global economy.

Joe Kaeser, Chairman of the Supervisory Board at the virtual Annual General Meeting said. "The task now is to master the operational challenges of the present while keeping a firm eye on the opportunities for sustainable value creation in the future.

In a review of 2021, Daimler Truck said it has “successfully kept its focus on working to improve its overall profitability. With its approach to strict fixed cost discipline, the company achieved its financial targets for 2021 while delivering approximately 455,400 trucks and buses - an increase in unit sales of 20 percent over 2020 - compared to the same period last year - despite significant supply chain headwinds.

In terms of revenue, the company achieved an increase of 10 percent compared to 2020 with approximately €39.8 billion. Adjusted EBIT amounted to €2.6 billion. In the industrial business, Daimler Truck achieved an adjusted return on sales (ROS adjusted) of 6.1 percent. At the end of the year, the company had a solid liquidity of €6 billion.

With approximately 100,000 employees, Daimler Truck is one of the largest commercial vehicle manufacturers with a global reach. The corporation aims to achieve a 10 percent  minimum return on sales in its industrial business by 2025, depending on market environment.  As early as 2030, locally emission-free commercial vehicles are expected to account for up to 60 percent of Daimler Truck sales.

From 2039 onwards, the company only wants to offer vehicles in North America, Europe and Japan that are CO2-neutral when driven.