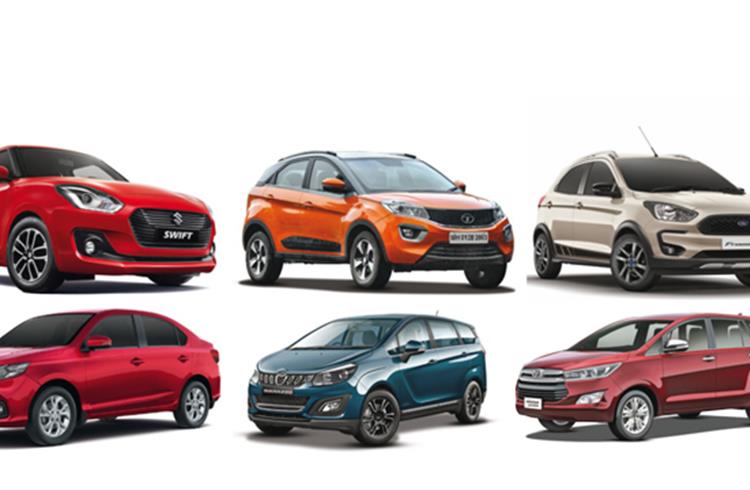 Even as key growth factors such as a bountiful monsoon and an improved economy favour its cause, passenger vehicle sales in India in September 2018, as per the numbers released by major OEMs today, point to tepid growth and slightly worrying at that. PV industry captains will be looking to the festive season to drive up demand.

While overall numbers project a safer picture, relative growth has been slow, primarily due to the high year-ago base created by a rush in PV sales after GST implementation in July 2017 and, more recently, the continuing impact of devastating floods in Kerala, a major car market. Also, it is to be noted that the festive occasion of Navratri, when much car buying happens in India, was in September 2017. Thus, with 2018’s Navratri coming up on October 10, expect industry to perform much better.

Meanwhile, a relentless surge in fuel prices over the past few months is also playing sales spoilsport, where petrol nudged the Rs 90 mark in Mumbai on September 24 to retail at Rs 90.17 for a litre in the city, while diesel clambered to Rs 78.67 per litre, making it a continuous upward rally in prices since July.

In totality, while passenger vehicle manufacturers have seen good relative growth in Q1 of FY2019, it has slightly been mellowed in Q2 owing to the GST effect. In July, SIAM’s deputy director general, Sugato Sen had given a similar outlook for the next few months to follow and had said, “We expect August and September sales to remain slow as well, again owing to the prolonged effect of the GST where there was a boost in PV sales during the same period in FY2018.”

“Growth will be back October onward because of the diffused effect of GST-led benefits, as well as the festive season driving sales,” Sen had added.

The Maruti with the fastest-growing sales, surprisingly, came in the form of the Ciaz midsize sedan which, in its facelift avatar launched in August 2018, is being seen regaining lost ground in the domestic market. Being the most value-for-money offering in the segment and  sold only through the company’s premium Nexa retail channel, the Ciaz registered sales of 6,246 units in the month, growing a respectable 11.5 percent (September 2017: 5,603). Meanwhile, the Omni and Eeco continue to do decent numbers: 14,645 units in September 2018, which is a 6.6 year-on-year growth (September 2017: 13,735).

Hyundai Motor India: The No 2 player by sales volumes, Hyundai Motor India sold 47,781 units in September, de-growing by a considerable 4.5 percent (September 2017: 50,028). The Korean carmaker has been seeing good demand for its Grand i10 and i20 hatchbacks, and has cumulatively sold 274,177 units across models between April-September, registering a growth of 3.67 percent (April-September 2017: 264,465).

According to Vikas Jain, national sales head, Hyundai Motor India, “Despite some on-going market challenges, we expect this festival season will induce positive sentiments among customers and the industry would witness a strong positive growth.”

Tata Motors: Tata Motors, which has been riding a wave of demand since some time now, continued in the same vein in September. With sales of 18,429 units, it saw notable 7 percent over last year (September 2017: 17,286). The company has clocked overall sales of 106,865 units over the first two quarters of FY2019, up a strong 31 percent over the year-ago performance when it sold 81,417 units between April and September 2017.

The growth comes on the back of good traction received by some of its contemporary products in the market, including the popular Tiago hatchback, Tigor compact sedan as well as the Nexon compact crossover. The company expanded these brands by introducing the limited edition Nexon Kraz, as well as the Tiago NRG – a compact crossover iteration of the hatchback.

According to Rajan Wadhera, president, Automotive Sector, M&M, “Our recently launched Marazzo has been receiving a good response from customers. The month of September has been muted for passenger vehicles due to factors such as low consumer buying sentiment, high fuel prices and the effects of monsoon in many parts of the country. We remain hopeful that the upcoming festive season will augur well for us as well as the automotive industry.”

Commenting on the numbers, Rajesh Goel, senior vice-president and director, Sales and Marketing, Honda Cars India, said: “HCIL registered cumulative growth of 3.5 percent in the first half of fiscal year 2018-19 backed by strong demand for the new Amaze. The subdued market sentiment combined with higher base of September 2017 and onset of Shradh period in Northern India from last week resulted in lower sales in September compared to last year. In order to keep the dealer stock within our norms, we rationalised the wholesale dispatches in September. We expect that the festival period improves the market sentiment and results in positive sales in the coming month.”

Commenting on the sales performance, N Raja, deputy managing director, Toyota Kirloskar Motor, said,” We are happy to have sustained a positive growth momentum of 17 percent from April to September 2018, as compared to the same period last year.  This growth can be attributed to the strong demand of the Innova Crysta, Fortuner, Yaris and the Etios Liva.  We have reached a significant milestone of more than 400,000 happy customers for Etios Series in the month of September 2018. Etios Liva has seen a positive sales growth of 10 percent during April-September 2018 as compared to same period last year.”

“Customer demand in the auto industry has temporarily dampened owing to rising fuel prices, floods in different parts of the country and impact of currency weakness. However, we are confident that the buying sentiments will improve in the festive season with a strong customer demand,” Raja added.

Between April and September 2018, the company clocked overall sales of 49,038 units, up 7.84 percent (April-September 2017: 45,472). According to Anurag Mehrotra, president and managing director, Ford India, “The festival season has started on a lower than expected note, owing to floods in Kerala, rising fuel prices and rupee depreciation, the industry is looking forward to closing the festive season on a higher note.”

CV sales moderate in September but are still up 23%