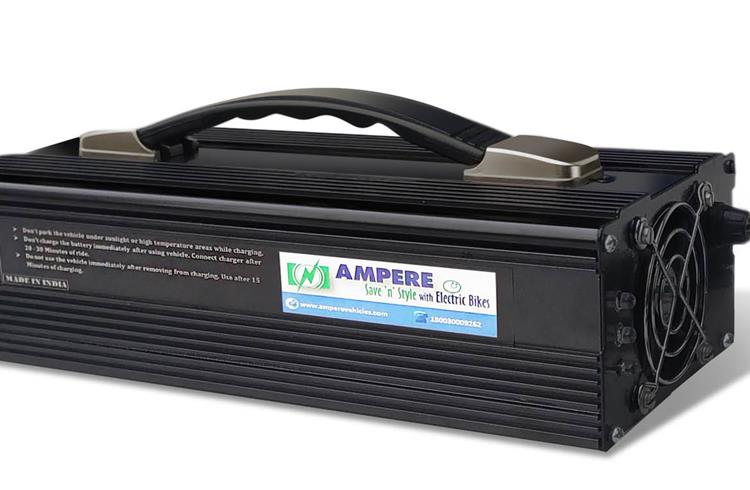 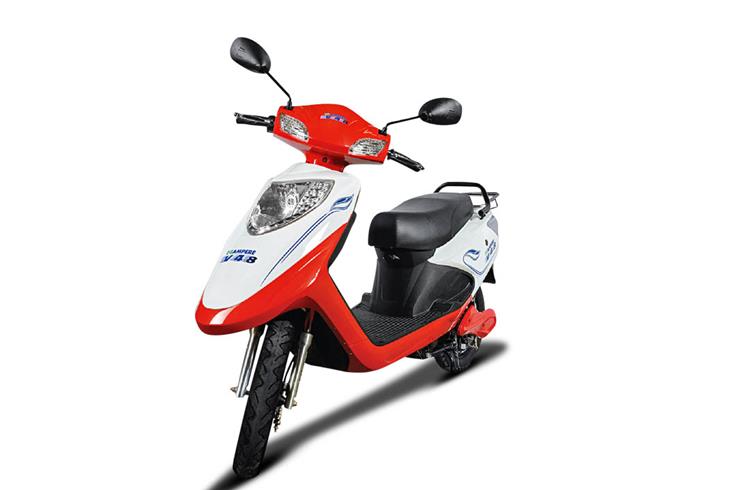 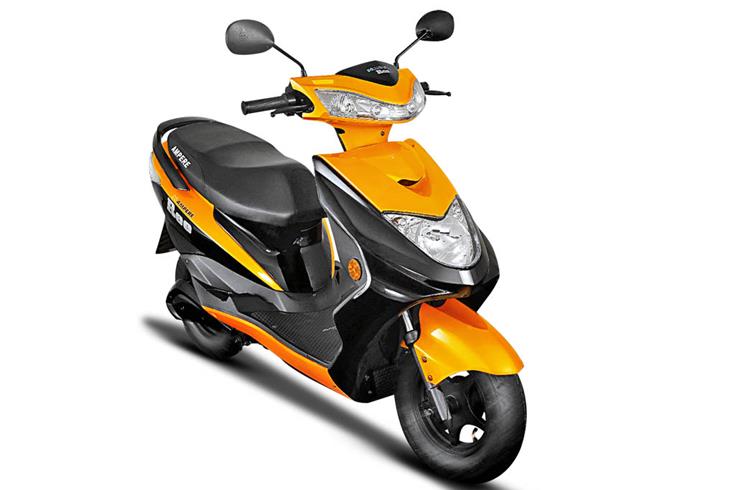 The electric scooter market in India has just seen the entry of two new scooters, this time from the Coimbatore-based EV startup, Ampere Vehicles.

Since the launch of its low-cost charger for lead-acid battery scooters in May last year, the company has been working on indigenously developing electric motors, battery controllers, as well as chargers for lithium-ion battery powered scooters, two of which were launched in New Delhi on May 11.

The Ampere V48 and the Reo Li-ion models are priced at Rs 38,000 and Rs 46,000 ex-showroom, India, respectively, and there is no additional registration fee applicable as the scooters offer a maximum speed limited to 25kph. The e-scooters come powered by a 250W brushless DC motor, powered by a 48V lithium-ion battery pack. While the Ampere V48 is capable of carrying 100kg of maximum load, the Reo has a hauling capacity of 120kg. The scooters offer a range of 65-70km per charge, where one full charge time varies from 4-5 hours.

L-R: Dr Harsh Vardhan, Minister of Science and Technology; Dr Bindu Dey, Secretary, Technology Development Board and President of India, Ram Nath Kovind at the unveiling ceremony of the lithium ion battery charger at Vigyan Bhawan, on May 11.

Apart from the two scooters, the company also introduced its newly developed charger for Li-ion battery packs, which was unveiled by the President of India, Ram Nath Kovind at a ceremony organised by the Technology Development Board at the Vigyan Bhawan, on the occasion of National Technology Day being observed on May 11.

The advanced lithium-ion charger comes priced at Rs 3,000 and is designed with two-stage charging profile, wherein the charging voltage and the current’s levels can be amended based on the requirements of battery manufacturers' recommendations. The microcontroller-based control and monitoring systems provides active battery reverse polarity protection, over temperature cut-off and output short circuit protection.

Its battery capacity rating is 48V, 20Ah or 24Ah with a charging time of 4-5 hours. Weighing 1.65kg, the input voltage range of the Li-ion charger ranges between 185Vac to 265Vac, and has the operating temperatures between zero to 50deg Centigrade. Also, the charger is enabled with input and output overvoltage protection.

The lithium-ion charger project is supported by the Technology Development Board, Ministry of Science and Technology, government of India, as part of the Make-in-India initiative towards creating charging infrastructure for the emerging EV industry in the country.

Speaking at the launch of the lithium-ion battery charger, Dr Bindu Dey, secretary, Technology Development Board, GOI, said, “Support to any development for advanced lithium technologies for electric mobility is in line with the government’s vision towards electrification, and we are happy to see Ampere’s initiative in developing this indigenously are enabling customers to commute at low-cost.”

Sales momentum picking up for electric two-wheelers
According to Hemalatha Annamalai, founder, Ampere Vehicles, “Our commitment and resolve to sustainable mobility is manifested in the consistently superior products that we have launched over the time. Our new lithium-ion charger is an extension of this commitment.”
Speaking to Autocar Professional on the sidelines of the launch, she said, “While we had launched our lead-acid charger last year, this year, we are progressing at a faster pace and are also indigenously developing a battery management system, which will be unveiled soon.”

“Now we feel that the momentum towards EVs has picked up and so, we and looking to do a lot of things in India with the pool of local talent available in the country. We have to keep in mind that we need to devise systems locally, based on India’s specific requirements of higher operating temperatures, dusty conditions and rigorous usage patterns.”

The scooters are pegged to go on sale from the company's 150 dealers present in 14 states across the country, with a major focus being on Tier 2, 3 and 4 towns.

“While we have largely been focusing on the smaller towns with our lead-acid scooters until now, with demand for cost-effective urban mobility solutions gradually rising in the major metros, we will take these Li-ion battery scooters to the mainstream cities as well.”

The company has sold close to 35,000 scooters since it rolled out its first product in 2008. “From this year onward, we will grow quite exponentially because the market is opening out and people are willing to be comfortable with the range and charge anxiety that comes associated with an EV,” said Annamalai.

Ampere V48, Reo first made-in-India lithium-ion e-scooters
The two models could also be credited as being the first homegrown lithium-ion scooters having their key components – the electric motor, battery controller as well as the charger – all being indigenously developed at the startup's R&D labs in Coimbatore.

Ampere Vehicles, however, is sourcing the battery packs on these offerings from Taiwan and China.

While there isn't a clear goal set about the volume expectations from the two scooters, Annamalai says that “volumes depend on how users see the comfort. We feel that if the support from the government continues, then the volumes will scale high.”

“Because of the high cost of the battery and an applicable import duty of 28 percent on getting the battery as a spare part and that of 12 percent otherwise, the government must reduce the battery duty and moreover, PSUs should develop batteries within India and then there is a fair chance of EV volumes scaling up”, she added.

“With a subsidy of Rs 17,000 for low-speed (less than 25kph) electric scooters and of Rs 22,000 for high-speed scooters, I think the government right now is supporting quite well. We also believe that lots of R&D grant should be given to develop advanced technologies and all government nodal bodies should switch their vehicle fleet to electric in order to drive the EV movement in the country”, Annamalai concluded.

Ampere Vehicles has 120 employees, with 30 percent women participation and an R&D team of 30 engineers working at its facility in Coimbatore.