The 2018 Euro NCAP testing was the toughest ever with new and more demanding challenges on safety technology, including cyclist-detection with auto-brake and emergency lane keeping systems. 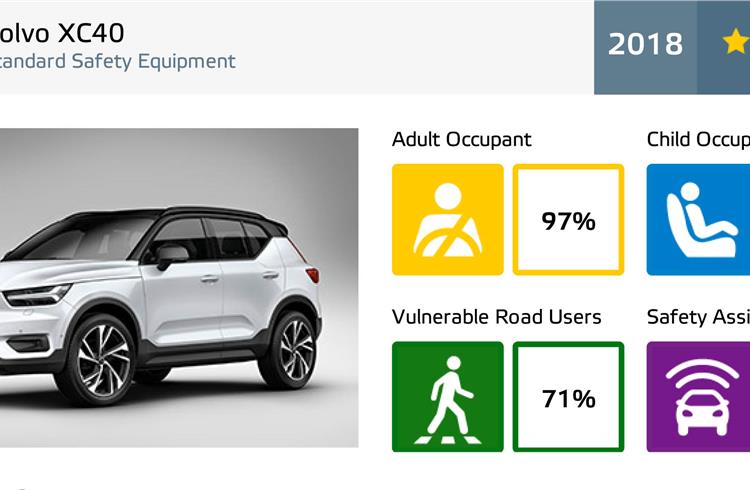 The Volvo XC40, launched earlier this month in India, has received five stars and top ratings in its 2018 Euro NCAP tests. The XC40 scored 97 percent for adult occupant protection, putting it amongst the top five cars for this aspect of safety tested by Euro NCAP in the last three years.

This means the XC40 joins its larger siblings in the 60 and 90 series as one of the safest cars on the roads.

The 2018 Euro NCAP testing was the toughest ever with new and more demanding challenges on safety technology, including cyclist-detection with auto-brake and emergency lane keeping systems. Overall, the new XC40 received the highest safety score among all cars tested under the new regime.

“The new XC40 is one of the safest cars on the market,” said Malin Ekholm, head of Volvo Cars Safety Centre. “It comes standard with the largest offering of safety technology of any small SUVs, helping drivers detect and avoid collisions, remain safely in their lane and reduce the impact of accidentally running off the road.”

All tested Volvo cars on sale today have received five stars in their respective Euro NCAP assessments. Last year, the XC60 was crowned the overall best-performing large off-roader and the best overall performer in the prestigious Euro NCAP 2017 Best in Class safety awards. The XC90 received the same accolade in 2015.

In March, the XC40 was named 2018 European Car of the Year, the first Volvo to win the prestigious award, and it has since been one of Volvo’s top sellers. The company announced in May that it would expand production in its manufacturing facilities in both Europe and China to meet the overwhelming demand for the car.

Adult occupant: The passenger compartment of the XC40 remained stable in the frontal offset test. Dummy readings showed good protection of all critical body areas apart from the lower leg of the passenger, protection of which was adequate. Volvo showed that good protection would be provided to the knees and femurs of occupants of different sizes and to those sitting in different positions. In the full-width rigid barrier test, protection of the chest of the rear passenger dummy was rated as marginal, based on dummy readings of chest compression.

The protection of all other critical body regions was rated as good for both dummies. In the side barrier and the more severe side pole tests, protection of all critical body areas was good and the XC40 scored maximum points in these tests. Tests on the front seats and head restraints demonstrated good protection of the neck against whiplash injuries in the event of a rear-end collision. A geometric assessment of the rear seats also indicated good whiplash protection. Volvo City Safety is standard equipment on the XC40. This autonomous emergency braking system performed well, avoiding collisions in all test scenarios of typical city driving.

Child occupant: Protection of both the 6-year and 10-year dummies was good in both the frontal offset and side barrier tests. The front passenger airbag can be disabled to allow a rearward-facing child restraint to be used in that seating position. Clear information is provided to the driver regarding the status of the airbag and the system was rewarded. All of the restraint types for which the XC40 is designed could be properly installed and accommodated in the vehicle.

Vulnerable road users: The bonnet provided good or adequate protection to the head of a struck pedestrian over most of its surface, with poor results only on the stiff windscreen pillars. The bumper scored maximum points for its protection of pedestrians' legs, with good results at all test locations. Protection of the pelvis was more mixed, with areas of good and poor protection. The autonomous emergency braking system performed well in all daylight tests against a pedestrian target. In darkness, the system performed well in detecting a pedestrian walking in the same direction but was weak in tests with a target crossing the vehicle's path. The same system performed adequately in daylight tests with a cyclist target.

Safety assist: The XC40 has a seatbelt reminder system for the front and rear seats. A standard-fit speed assistance system identifies the local speed limit and allows the driver to set the speed accordingly. The system performed adequately in Euro NCAP's tests. The autonomous emergency braking system worked well in all test simulations of highway scenarios, losing only a fraction of a point. The standard-fit lane assistance system comprises Lane Keep Assistance, which warns the driver when the car is drifting out of lane and gently applies the steering to correct the path, and Emergency Lane Keeping, which intervenes much more aggressively in emergency situations, to keep the car on the road or from hitting another vehicle.

Also read: Volvo India gets 200 bookings for new XC40 within a fortnight of launch