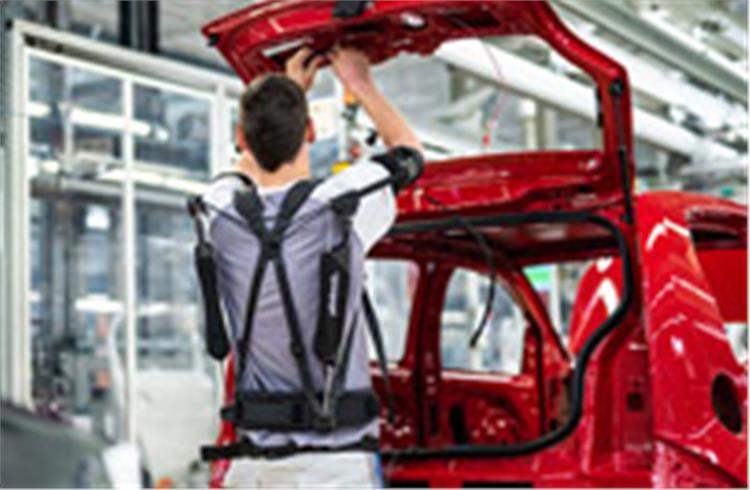 Volkswagen is promoting the modernisation of its production with a pilot project in Bratislava, Slovakia with a focus on the future of work. These include physical and behavioral support systems that reduce ergonomically disadvantageous workplaces.

For work in which ergonomics cannot be improved either technically or organisationally, so-called exoskeletons, for example, provide support for employees in production. These external support structures, which are worn similar to a backpack, are being tested in mass production in Bratislava with 30 employees, which are noticeably relieved in their assembly work.

According to Margarida Pereira, project manager of the Demography and Ergonomics field of action, "Feedback from the testers shows that systems such as the exoskeleton facilitate physical tasks considerably. We want to design the production work of the future in such a way that every employee can add value over the entire lifetime of his or her life with the best possible health. "

Volkswagen says it has been researching this topic since 2012 and is a driver for the targeted development of the ergonomics strategy with exoskeletons. The first result is the Paexo support system for use in static overhead work. The many years of successful cooperation with the company Ottobock thus open up new perspectives on the design of jobs in Industry 4.0.

Eric Reuting, Chief Operating Officer, Volkswagen Slovakia, said, "Especially for workplaces with a high proportion of overhead work in automotive final assembly, a physical support system has been developed which, at 1.9kg, is the lightest system. The Paexo is currently being tested in Bratislava in a long-term pilot with 30 exoskeletons, the largest evaluation in Europe. "