Volkswagen has begun the pre-series production of the components for the upcoming Volkswagen ID.3 electric car 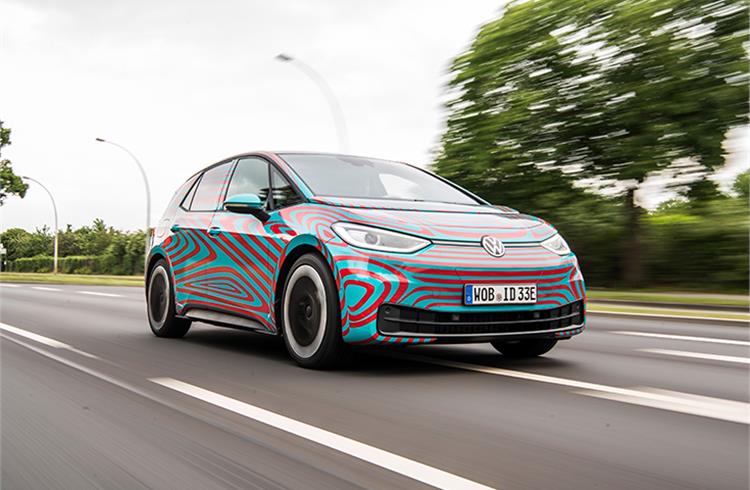 Pre-series production for the Volkswagen ID.3 electric car has already begun at the Volkswagen plant in Zwickau. The core components for electric cars are developed and produced for the new electric vehicles at the Volkswagen Group Components plants: the electric drive comes from Kassel, the Salzgitter plant supplies its colleagues in Hessen with rotors and stators. The Brunswick plant develops and produces the battery system, further sites deliver castings and other parts. 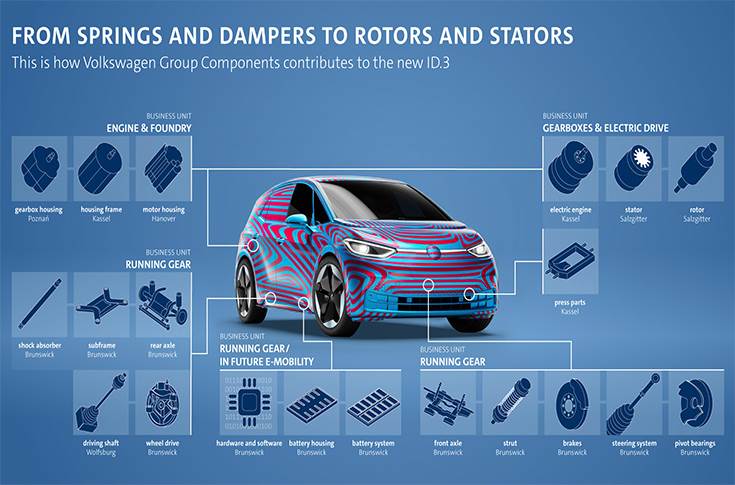 Volkswagen Group Components supplies many parts and components to Zwickau for the manufacture of the ID.3: from the front and rear axles, steering system, brakes and battery system to the complete electric drive.

“The success of the ID.3 start-up marks a milestone for our Group. Volkswagen Group Components supplies core components for this vehicle. The shared responsibility for the success of the ID.3 start-up is at the same time a commitment and an incentive for us. We are concentrating on modifying our plants to manufacture new products for electric vehicles. Certain plants are being specialised, and at the same time we are making use of the synergies through the manufacturing of components within the Group”, said Thomas Schmall, chairman of the board of management of Volkswagen Group Components.

Kassel produces the electric drives for all MEB vehicles in Europe and North America. Production of pre-series drives has already started; in future, up to 500,000 units will leave the factory each year. Kassel works closely with the Chinese plant in Tianjin where the electric drive is produced in parallel for the Chinese market. Together, the two plants will produce up to 1.4 million electric drives each year from 2023 onwards. This means that Volkswagen Group Components will be one of the largest global manufacturers of electric vehicle drives in the future.

In addition to the electric drive, load-bearing components and body parts are also produced in Kassel for the ID.3: parts of the extremely durable frame for the battery box, damper mounts, crossmembers and the tunnel. The platform parts from Kassel are then delivered to the Zwickau plant for assembly to complete the vehicle body.

Rotor and stator from Salzgitter
As part of the transformation to electric mobility, the Components plant in Salzgitter is specialised in manufacturing rotors and stators, two fundamental parts of an electric drive, in addition to conventional engine production. In future, up to 2,000 rotors and stators will be produced each day, along with petrol, diesel and CNG drives. In order to achieve these high volumes, a new hairpin technology is used to manufacture stators, a technology developed by Volkswagen. It enables improved performance figures in shorter production times.

Salzgitter also stands for the transformation process at Group Components: Volkswagen Group Components has assumed end-to-end responsibility at Volkswagen AG for the battery, starting with research and ending with the recycling process. The Salzgitter site has taken on key elements of these processes: battery expertise is being developed at the Center of Excellence (CoE) and a pilot plant for battery production will be opened by the end of the year. This will be followed by the pilot plant for recycling in 2020. Competence and industrial processes are to be developed at both pilot plants.

Battery system from Brunswick
The battery system for the ID.3 will be manufactured at the site in Brunswick. A new hall the size of nine football pitches will be built especially for manufacturing the battery system, which looks rather like a chocolate bar. It is scheduled to open in the fourth quarter of 2019. In future, around 2,000 units will be produced per day and delivered to the vehicle production site in Zwickau. The Brunswick site has been steadily developing its battery expertise since 2013, in relation to both complete systems and production. The battery systems manufactured there include those for current electric and hybrid vehicles by the Volkswagen brand as well as trucks for Scania and MAN.

Many years of experience and expertise have also found their way into the most recent battery system for the MEB. MEB battery systems that have already been manufactured are currently undergoing several weeks of hardness testing, and are being put through their paces. The results will be incorporated into further development.