This cartridge design, the company said, will facilitate the everyday transport and supply of hydrogen energy to power a broad range of daily life applications in and outside of the home. 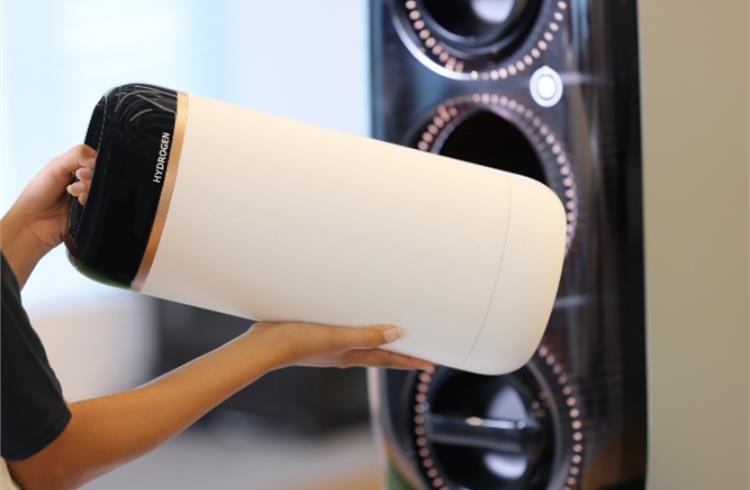 Toyota and its subsidiary, Woven Planet Holdings, Inc. have developed a working prototype of its portable hydrogen cartridge.

This cartridge design, the company said, will facilitate the everyday transport and supply of hydrogen energy to power a broad range of daily life applications in and outside of the home. Toyota and Woven Planet will conduct Proof of Concept ("PoC") trials in various places, including Woven City, a human-centered smart city of the future currently being constructed in Susono City, Shizuoka Prefecture.

Toyota and Woven Planet are studying a number of viable pathways to carbon neutrality and consider hydrogen to be a promising solution. Together with ENEOS Corporation, Toyota and Woven Planet are working to build a comprehensive hydrogen-based supply chain aimed at expediting and simplifying production, transport, and daily usage. These trials will focus on meeting the energy needs of Woven City residents and those living in its surrounding communities.

When hydrogen is sued, zero carbon dioxide (CO2) is emitted when hydrogen is used. Furthermore, when hydrogen is produced using renewable energy sources such as wind, solar, geothermal, and biomass, CO2 emissions are minimised during the production process as well. Hydrogen can be used to generate electricity in fuel cell systems and can also be used as a combustion fuel.

Next Steps
Today most hydrogen is generated from fossil fuels and used for industrial purposes such as fertilizer production and petroleum refining. To use hydrogen as an energy source in our homes and daily life, the technology must meet different safety standards and be adjusted to new environments. In the future, Toyota said it expected hydrogen will be generated with very low carbon emissions and used in a wider variety of applications. The Japanese government is working on a range of studies to promote the safe early adoption of hydrogen.

By establishing the supply chain, Toyota said it hopes to facilitate the flow of a larger volume of hydrogen and fuel more applications. Woven City will explore and test an array of energy applications using hydrogen cartridges including mobility, household applications, and many future possibilities.

The project’s ultimate goal is to realise a carbon-neutral society where everyone can access clean energy, first in Japan and then throughout the world. Toyota and Woven Planet aim to develop best practices for incorporating clean hydrogen energy into daily life by conducting human-centered demonstrations in and around Woven City.

The portable hydrogen cartridge prototype will be showcased at Super Taikyu Series 2022 Round 2 at Fuji SpeedWay from June 3 to 5, 2022. Our showcase is geared toward teaching people about how hydrogen energy works and helping them imagine the countless ways hydrogen can become a useful part of their daily lives.