Smart factories could add up to $160 billion annually to global auto industry: Capgemini

Global survey of 330 executives from 8 countries – China, France, Germany, India, Italy, Sweden, the UK and the US – reveals that 50 percent of automotive plants have the potential to be smart by 2023. The global automotive industry, which is one of the primary drivers for employment generation, is increasingly automating production cycles and going 'smart'. With vehicles seeing more technological advancement and turning into computers on wheels, the manufacturing process is also turning a lot more high-tech across the automotive value chain.

Capgemini, the global technology and services provider, has undertook a survey of around 330 executives from the global auto industry, and found out hat when it comes to investing in smart factories, the auto industry leads all other industries in its share of firms in the highest investment category. 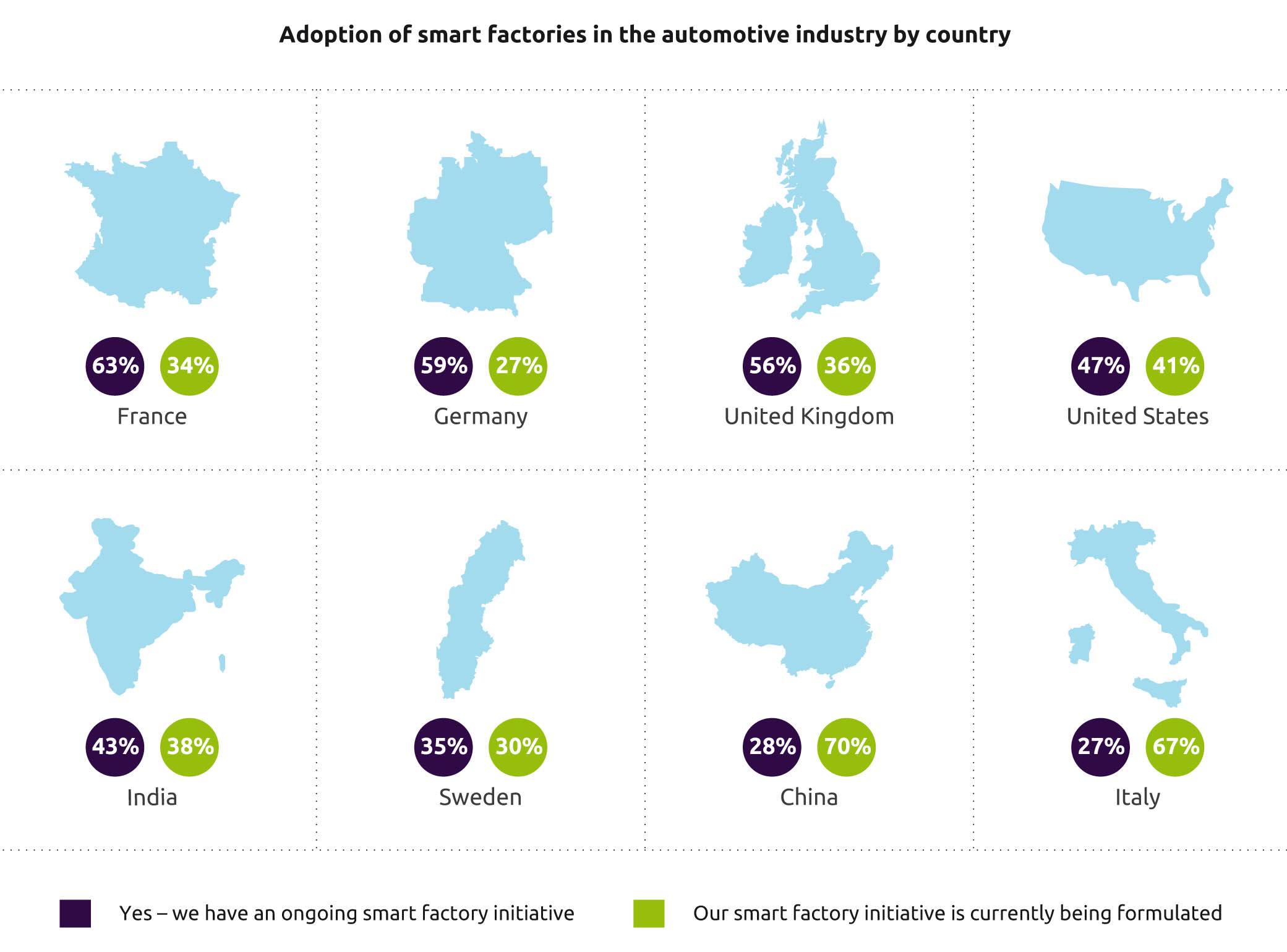 The resarch survey covered 223 automotive executives in 2017 as part of the 'Smart Factories: How can manufacturers realise the potential of digital industrial revolution' study. This year (2018), it has surveyed a further 103 executives from automotive industry. The respondents were drawn from director-level or above, from a diverse set of functions, and were closely associated with their organisations’ smart factory initiative.

The survey covered executives from eight countries – China, France, Germany, India, Italy, Sweden, the United Kingdom, and the United States. The survey sample is evenly distributed between OEMs and suppliers, each having $1 billion (Rs 6,317 crore) or more in annual revenues.

The ‘Automotive Smart Factories’ report finds that smart factories could add up to $160 billion (Rs 1,010,720 crore) annually to the global auto industry as productivity gains by 2023 onwards. The industry is making larger investments and setting higher targets for its digital manufacturing operations than any other sector. However, a few automotive manufacturers have translated this enthusiasm into real progress – 42 percent of smart factory initiatives are struggling and the digital maturity of their manufacturing operations is below par. The Capgemini report finds that OEMs, which are seeing the best progress, invested 2.5 times more than the companies which are struggling. Additionally, these OEMs are also involving their leadership teams, developing their talent, and investing in the right areas (those smart factory components that are critical for the future, such as manufacturing intelligence and predictive maintenance), along with an opportunity for other OEMs which could also find success in the opportunity if they follow in the footsteps of a cohort.

The respondents expected average productivity on the back of smart manufacturing to improve by around 30 percent by 2023. With the industry expecting an average of 24 percent of its factories as ‘Smart’ operations, thus helping to improve productivity to the value of around $160 billion (Rs 1,010,720 crore) globally, or around 7 percent of the total annual industry value.

50% of auto plants have potential to be smart by 2023
Capegemini expects that as many as 50 percent of the automotive factories have the potential to be smart by 2023 and in this scenario the annual value from smart factories to the industry could reach $344 billion (Rs 2,173,048 crore) or 15 percent of industry’s global annual revenues as of 2017.

For the investment front, the study highlights that an OEM can achieve break-even within a year of reaching the smart factory’s full potential. It estimates that around 49 percent of OEMs have invested over $250 million (Rs 1,579 crore) globally in the last five years towards smart manufacturing.

According to Capegemini, France, Germany and the UK, a majority of auto manufacturers (63%, 59%, and 56%) have ongoing smart factory initiatives – a considerable lead over the other countries, while Chinese and Italian automotive manufacturers plan to catch up with the leading countries soon, with around 70 percent formulating strategy for their smart factory initiatives.

It states that the gap between the industry’s enthusiasm and its lack of progress could reflect the industry’s high expectations for its smart factory initiatives. Some of the specific challenges the industry faced at different stages from strategy to implementation included lack of coordination among organisational units (32%), lack of clear business case (30%), lack of leadership commitment (29%), lack of investment (29%), lack of maturity in lean shopfloor automation process (27%) and lack of talent/capability in new technology (25%) among others. 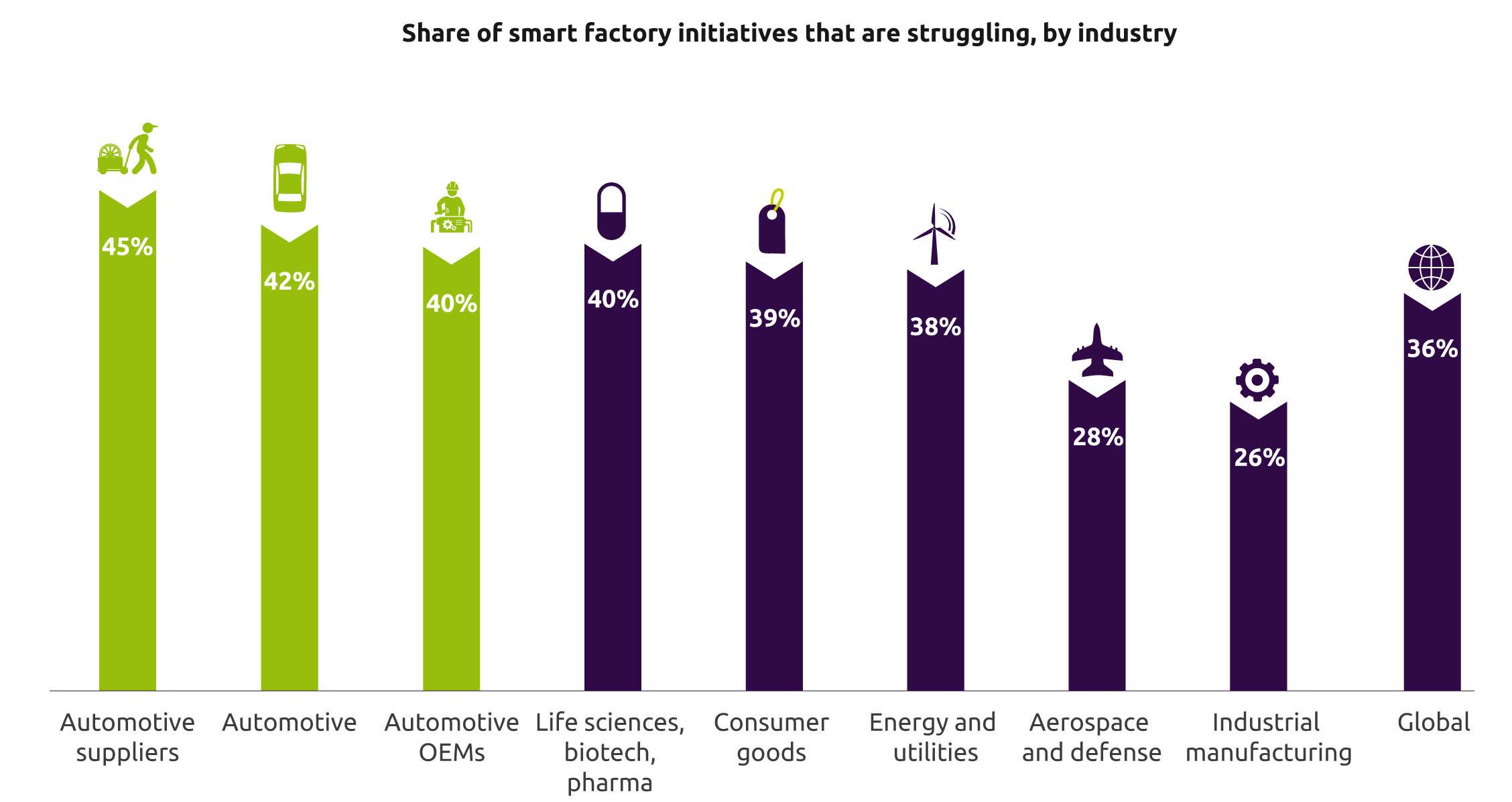 In the report Dr. Gunter Beitinger, vice-president of manufacturing at Siemens Digital Factory, said: “One common reason why some companies struggle in their smart- factory initiative is that their vision of smart factory is more technology oriented than business oriented. Those companies also often underestimate the effort and investment required to achieve their smart factory vision.” Involvement of leadership also plays a key role in the transformation process. The report finds that firms with leadership involvement in smart factories saw 65 percent making good progress compared to 47 percent where the leadership abstained from involving.

OEMs and suppliers
In the context of adoption, the report finds that around half of the OEMs have been successful in adoption of smart factories while the suppliers lagged behind. In terms of share of suppliers struggling in their smart factory initiative, the share was higher compared to OEMs. 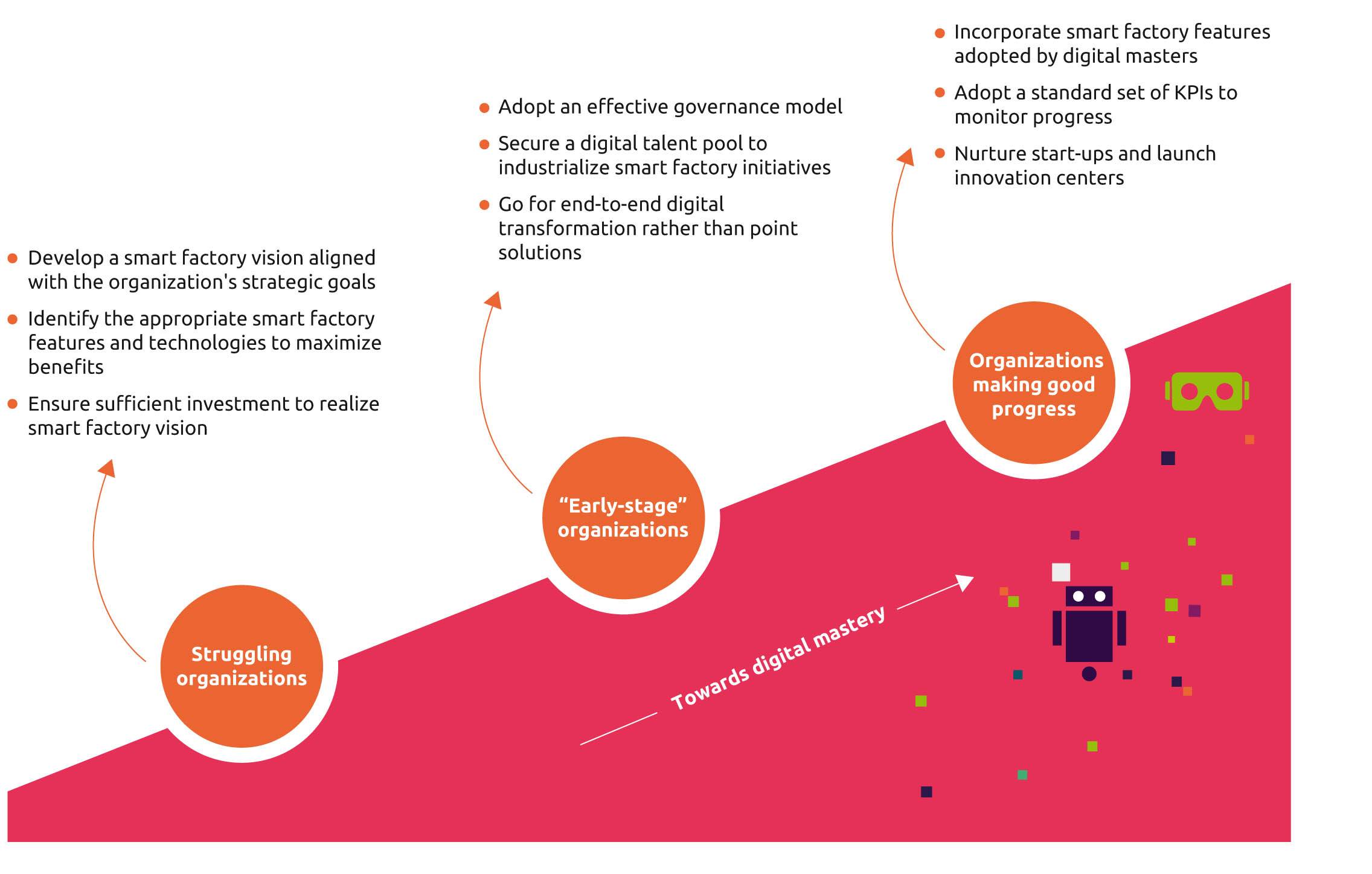 Capegemini states that if this trend continued for a few years, it could lead to a rift between the suppliers and OEMs, jeopardising potential benefits to the industry as a whole. The study predicts that if suppliers fall behind in their smart factory projects, the entire industry will feel the shortfall. For instance, if suppliers fail to use smart factories to drive quality, the OEMs will have to compensate by increasing parts’ inspections. This would mean diverting resources and investment that could have been used to improve output at their own smart factory.

The report points out that for companies which are struggling in their efforts will need clear vision, strong investment, and a focus on features utilised by successful organisations. Companies in early stages would need to align their commitment on governance and talent.

Capegemini states that the auto industry stands to massively boost its productivity through smart factories – a shot in the arm for an industry striving for growth, and the significant investment required for smart factories can be recouped in reasonable time. But even with this clear benefits case, and significant enthusiasm in the industry, success has eluded many. By emulating the habits of the digital masters, and focusing on driving digital maturity, the industry can put itself firmly in the driving seat of the digital industrial revolution.