While Maruti Suzuki has for long been a growth driver for SMC, the Japanese automaker’s two-wheeler business has returned to profitability with Suzuki Motorcycle India’s scooter sales turning into a big contributor. 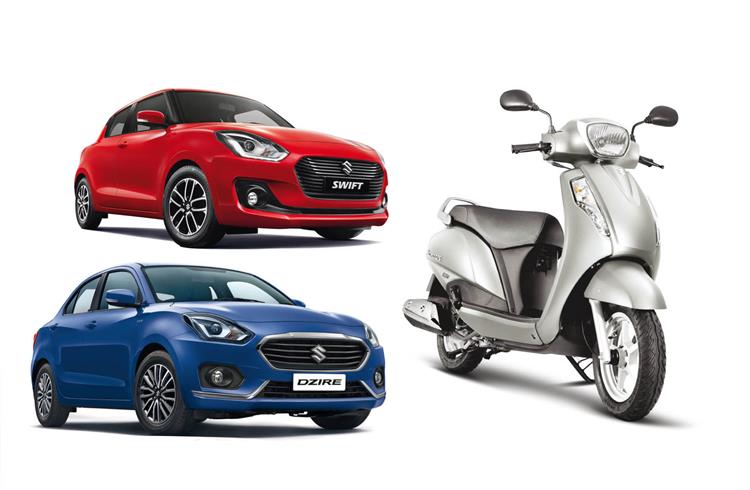 Suzuki Motor Corporation (SMC), Japan has reported strong 13.6 percent YoY growth in its consolidated net sales in the first quarter (April-June 2018) of the ongoing financial year, which the Japanese automaker terms as FY2018 for the April 2018-March 2019 period.

SMC’s operating income for Q1 stood at 116.5 billion Yen, a jump of 37 percent YoY. The company attributes the growth in its operating profits to the improvement in its profitability in Asia, Japan and Europe. The financial statement released by SMC credits new model mix, decrease of depreciation and cost reduction as the three key factors that contributed to its YoY growth across the board.

According to the company, its overseas automobile net sales increased YoY mainly owning to increase in sales in markets including India and Europe. The overall net sales in the passenger vehicle category fetched 900.6 billion Yen, growing by 113.3 billion Yen or 14.4 percent YoY.

India is the largest market for Suzuki’s global PV sales with Q1 retails to the tune of 464,000 units (26 percent YoY). Maruti Suzuki, its Indian arm, is the PV market leader with a dominating 52.54 percent market share.

SMC’s sales performance in Europe is reported at about 74,000 units (up 6 percent YoY) during the period.

On the motorcycle and ATV business front, SMC has again reported that India has turned out to be its largest market. The Q1 financial statement suggests that the company has sold close to 423,000 units, thereby marking YoY growth of 12 percent. Of that, while 19,000 units come from Japan, overseas sales contributed 404,000 units during the said period.

Asia stands as the largest contributor reporting sales of 340,000 units in Q1 to SMC’s total overseas sales in the motorcycle and ATV business. India has contributed 152,000 units (up an impressive 40 percent YoY) during the period, thereby marking itself as the most critical market for SMC globally.

In a company document addressed to its investors and market analysts, SMC has quoted, “Although we turned to profit in the fiscal year ended March 2018, it is only that it (the motorcycle business) finally departed from the deficit trend. We still need to monitor the situation of strengthening future product lineup and sales network in order to stabilise the profit trend. We continue to concentrate on ‘sport’ and ‘backbone’ models above 150cc, and we would like to strengthen sales force with new models.”

The backbone models here are referred to the commuter motorcycles (primarily the 150cc models), which Suzuki categorizes by that name in the ASEAN markets.

Suzuki Motorcycle India on a good run
Driving Suzuki’s global two-wheeler business is its 100 percent Indian subsidiary, Suzuki Motorcycle India. The Access 125 scooter, which is driving the volumes for Suzuki not only in India but also in Asia, reportedly sold close to 410,000 units in FY2017-18 and contributed to more than 80 percent of the company’s total two-wheeler sales in India. Suzuki now aims to sell 500,000 units of the Access 125 scooter, and has recently launched the Burgman Street, which is powered by the same 125cc engine from the Access 125.

In a recent interaction with Autocar Professional, Satoshi Uchida, MD, Suzuki Motorcycle India, claimed, “India is the most important market for Suzuki’s global two-wheeler business. We plan to consolidate our position in this market thereby boosting our export business from India too in the near future.”

The company has earmarked Rs 600 crore to set up its second two-wheeler manufacturing plant in India. Its existing facility in Gurgaon, which currently has a capacity of 750,000 units per annum, will see near-100 percent capacity utilisation by the end of the ongoing financial year.

Meanwhile, the company continues to make investments in its Gurgaon facility to expand capacity. According to Sajeev Rajasekharan, executive vice-president, Suzuki Motorcycle India, the Gurgaon facility can accommodate production until 2020, by when it is understood to be rolling out about a million two-wheelers per annum.

With growing demand in the passenger vehicle and the two-wheeler segments, India will no doubt further cement its position in Suzuki Motor Corporation’s global growth plans.