As part of its broader vision, Quantron aims to enable a complete ecosystem – Quantron as a Service, power generation, battery systems, retrofitment and hydrogen refuelling among others. 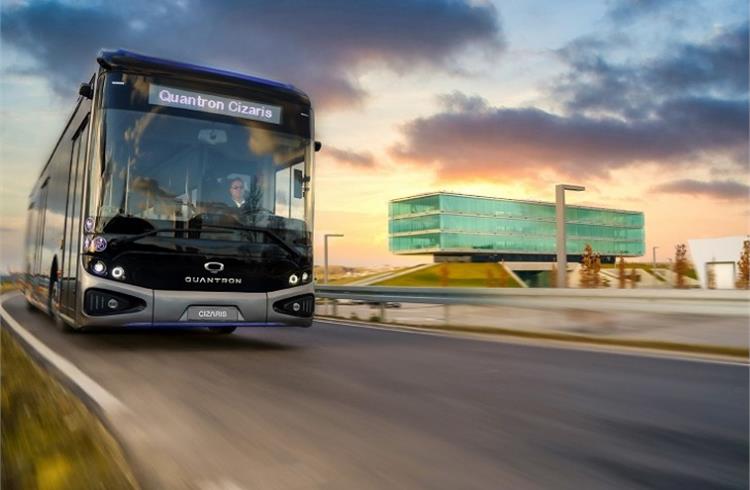 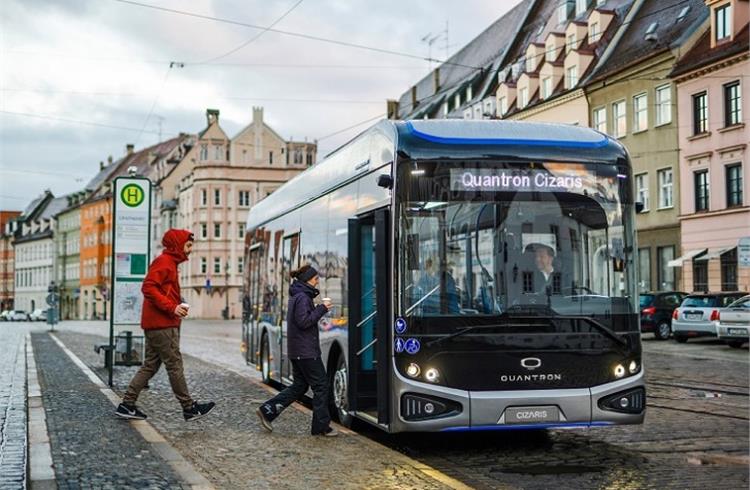 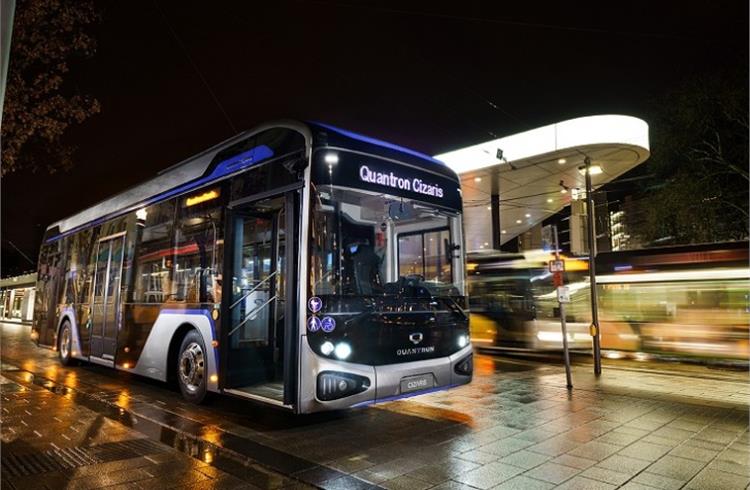 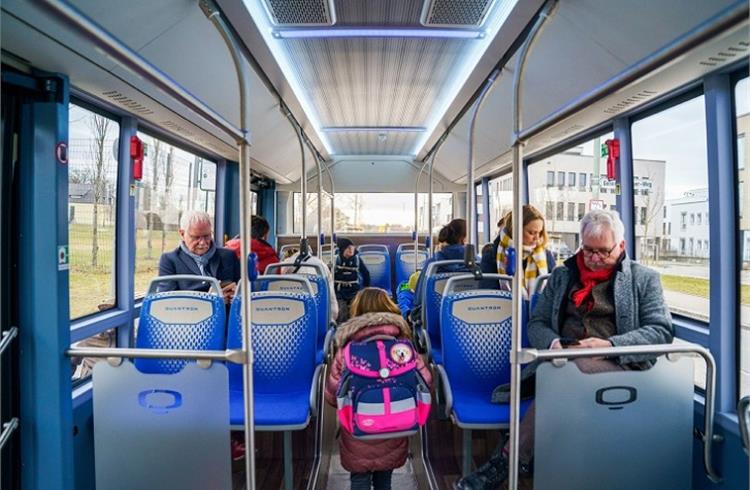 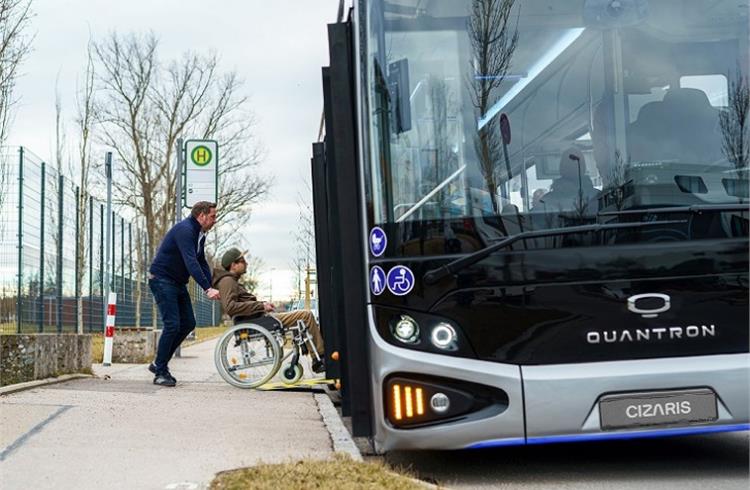 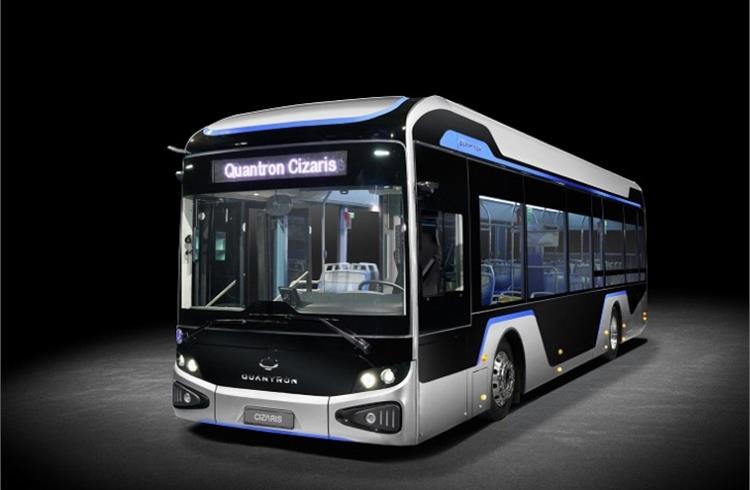 Quantron AG, a systems provider of clean battery and hydrogen-powered e-mobility for commercial vehicles such as trucks, buses and vans has launched its first electric vehicle the Cizaris, a 12-metre e-bus.

The new bus model in the will be available as an all-electric version (Cizaris 12 EV), followed in 2023 by a fuel cell drive (Cizaris 12 H) using a largely identical powertrain. Quantron says it enjoys a special position here as a ‘Preferred Partner’ thanks to its entrepreneurial connection with the Asian manufacturer EV Dynamics.

The Cizaris marks the entry of Quantron in the sustainable and tender-driven city bus market, which it says is becoming increasingly important for transport companies due to the European ‘Clean Vehicles Directive’. In doing so, the designers are drawing on a vehicle platform that has proven itself hundreds of times over in Asia's largest electric bus markets in recent years. 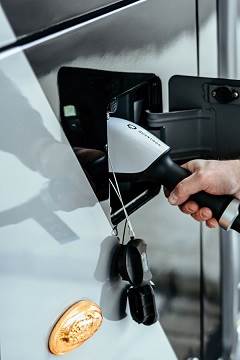 In terms of design, the front of the vehicle is visually appealing thanks to its windscreen, which is pulled far down and has large radii on the outside, leaving space below for the new logo. Thanks to its design as a purely electric bus, the vehicle does not have a conventional ‘power unit tower’ in the rear and thus offers 24 to 35 seats – in total, depending on the battery package, there is room for 81 to 95 passengers.

As part of its broader vision, Quantron aims to enable a complete ecosystem – Quantron as a Service, power generation, battery systems, retrofitment and hydrogen refuelling among others.

The e-bus features access through two or three 1,200mm wide doors and wide passages between the axles or to the optional third door at the rear contribute to the airy and pleasant impression of space, as does the headroom of 2,449mm. On the inside the seat covers are manufactured using textile digital printing and feature the Quantron logo in the specially created parametric design pattern. A highly efficient Valeo heat pump/air conditioning unit with a cooling capacity of 33 kW provides the ideal climate on board. Antiviral filters as well as a closed driver's cab are among the possible equipment options adapted to the respective countries. A special highlight in the interior is the elaborately perforated aluminium ceiling with indirect lateral light as well as further LED lights mounted transversely to it, the colour of which can be changed on request.

The driver's workplace of the Cizaris is mounted on a raised platform from which the driver meets the passengers at ‘eye level’. Every driver finds the optimum position on high-quality and versatile adjustable seats from Isringhausen or Grammer. The easy-grip steering wheel with the new brand logo is also adjustable in two directions. A functionally designed panel with large monitor for rear-view camera and co. has very few buttons. On the right of the steering wheel is the recuperation lever, which can be used to select the power of the brake energy recuperation in three stages. A fully digital instrument cluster from Actia provides information on all important processes and status messages, which can be optimally read at all times - as can the high-resolution camera mirror monitors.

The Cizaris offers a separate front observation camera with a large monitor above the cockpit. The electric bus is equipped with the latest electronic safety systems such as ABS/ASR, EBS 5.0, ECAS from European production, and the turn-off assistant from Mobileye can also be retrofitted on request. And optimum fire protection is ensured in the rear compartment, in the battery modules and other high-voltage components by means of fire detectors (temperature/gas sensors) and separate powder extinguishing cartridges - even though the LFP batteries are considered by all experts to be largely ‘incombustible’.

The OEM says it relies on the combination of robust and reliable lithium iron phosphate batteries and highly efficient synchronous central motor from Dana/TM4, which has been used in tens of thousands of buses for years. With between 242 and 424 kilowatt hours of selectable battery capacity, CATL's roof-mounted-only battery packs are fast-charged with 65 to 150 kW of direct current (DC) in 2-5 hours. In the medium-heavy eSORT 2 cycle, this energy is sufficient for 220km to 370km circulations at a do-duty (DoD) charge rate of 10 percent.

The vehicle-mounted and water-cooled Dana/TM4 central motor based on the permanent synchronous principle (PSM) is appealing due to its low speeds and particularly high efficiency compared with asynchronous motors. It has an output of 145/245 kilowatts (nominal/maximum) and a maximum engine torque of 1,055/3,329 newton meters, which is developed without any gear changes. With the introduction of the fuel cell version, an even more powerful powertrain will be used.

The company will offer warranty of two years for the entire vehicle, and eight years or 3,000 charging cycles (or 80 percent charging capacity - whichever comes first) for the important batteries. Quantron has a network of 700 service partners in Europe, many of whom can also service electric buses. In a multi-stage service concept, it is checked in each case whether the customer's workshop can be upgraded to work largely self-sufficiently with the support of Quantron technicians.

The OEM says the market launch of the Quantron Cizaris, the initial sales focus will be Eastern Europe, the Middle East, Scandinavia and Southern Europe. Due to the special requirements of the German market, such as the VDV specifications regarding the driver's workstation and other systems, the market launch in Germany, Austria and Switzerland will take place in the second half of 2022. 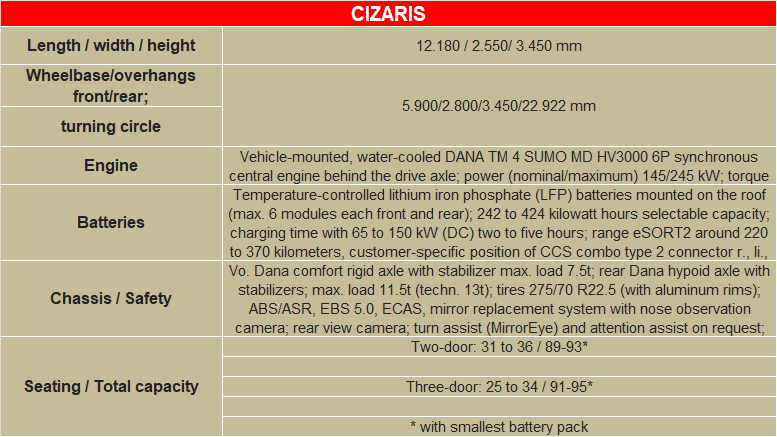