Piaggio packs a punch at EICMA 2022

The Piaggio Group, which includes the Aprilia, Moto Guzzi, Piaggio and Vespa brands, has showcased a range of new two-wheelers for Model Year 2023 at EICMA including an EV each from Aprilia and Piaggio. 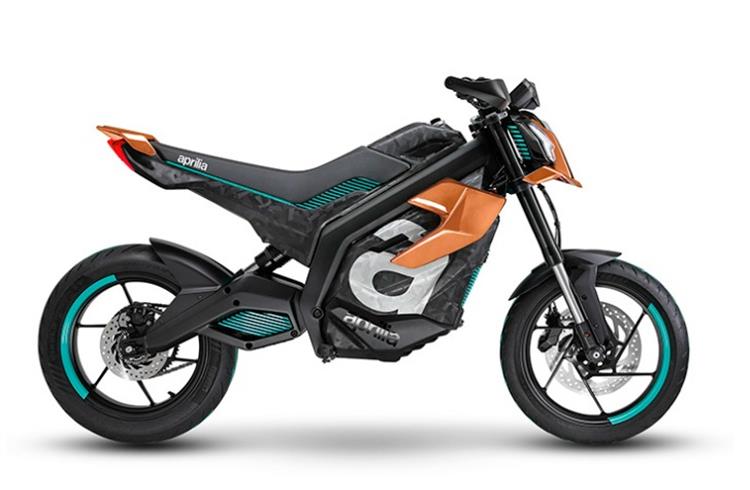 The Aprilia ELECTRICa uses all the know-how made available from the Piaggio Group, which has been working on electric propulsion since 1975. 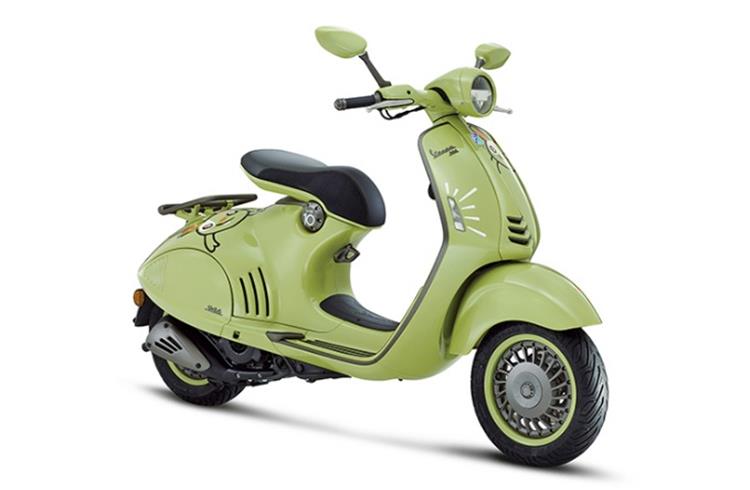 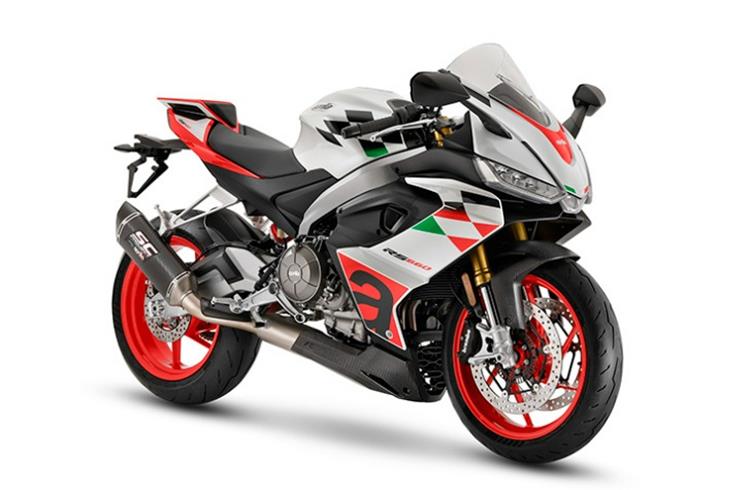 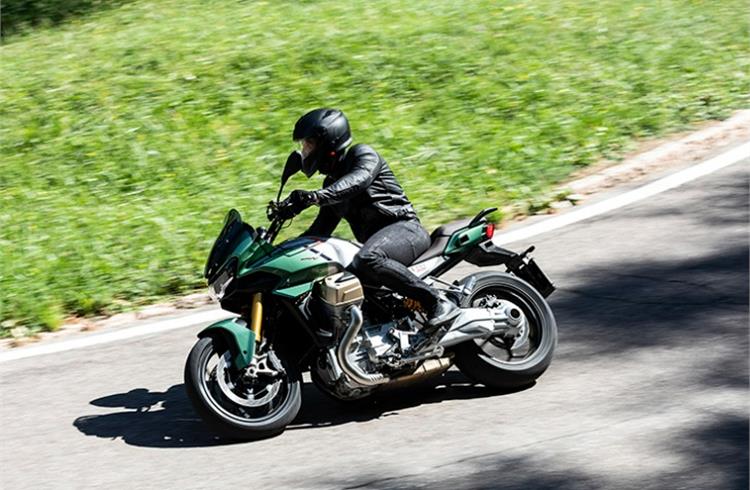 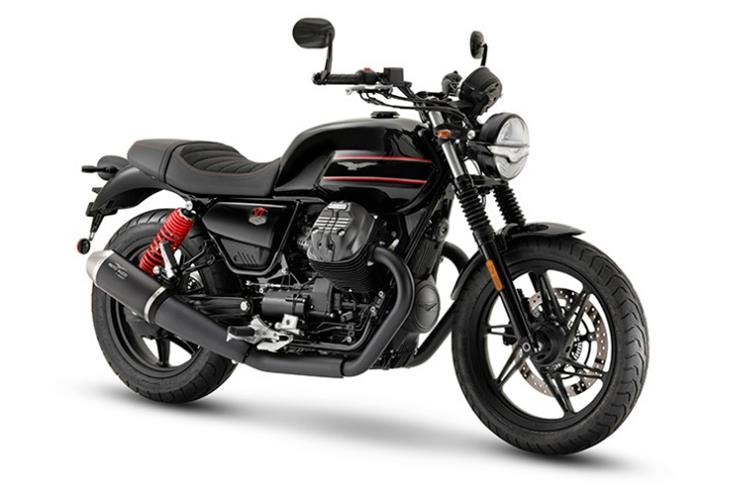 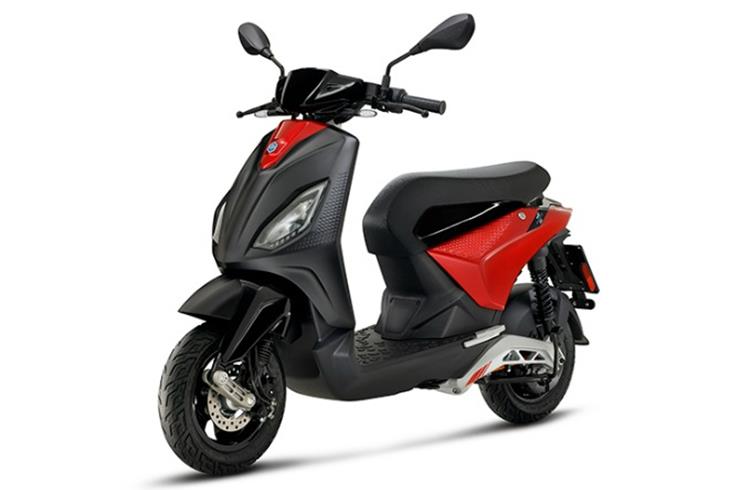 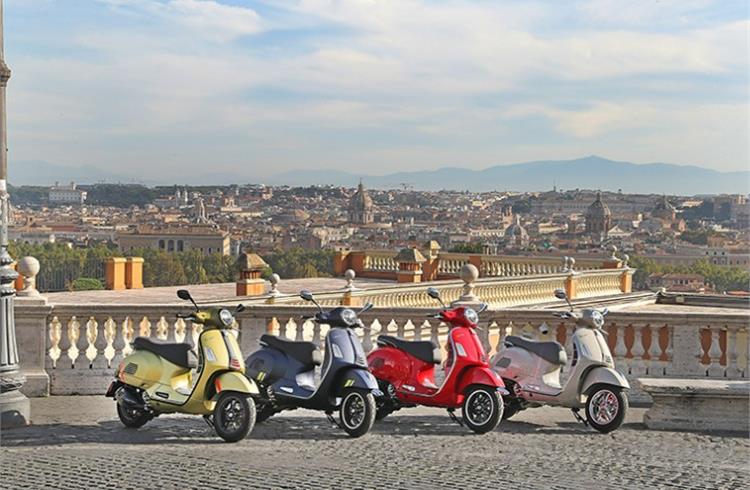 The new GTS’ ‘neck tie’ on the front shield is new, as well as the metallic profiles of the body, and the entire lighting system is fully LED. 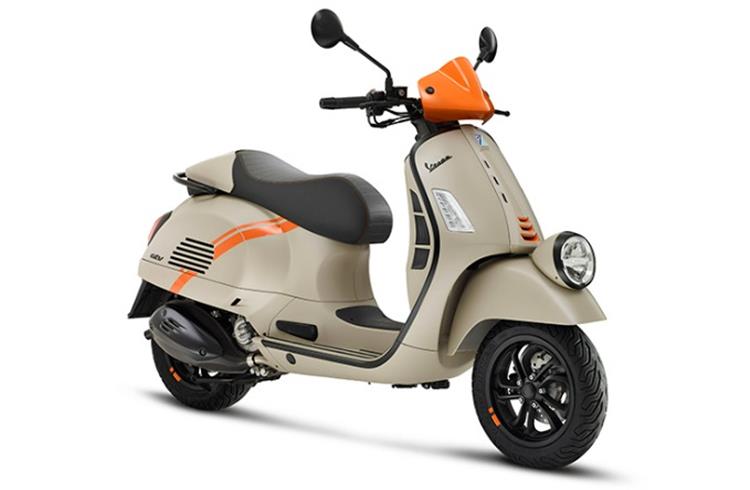 Built on the Vespa GTS, the MY2023 Vespa GTV is reborn with a completely new look, technological upgrades and sporty colours. 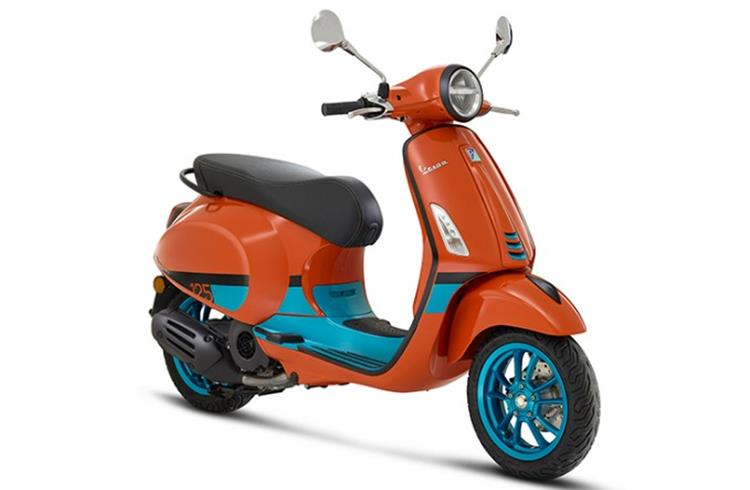 Italy’s Piaggio Group is on home ground at Milan at the EICMA 2022 trade fair, the world’s best for two-wheelers, and reason for it to make a splash there. It has showcased all of 10 products from its brand factory comprising one Piaggio, two Aprilias, three Moto Guzzis and four Vespas. Two of them are electric.

For Model Year 2023, the Piaggio Group has introduced a range of new models at EICMA with all its brands:

Aprilia ELECTRICa Project
The ELECTRICa project is Aprilia's lightweight, zero emissions bike with a fun and satisfying ride. ELECTRICa uses all the know-how made available from the Piaggio Group, which has been working on electric propulsion since 1975, having introduced a long line of vehicles throughout the times such as the MP3 Hybrid, the first hybrid scooter in the world. The look is unmistakeably Aprilia, especially from the front where a modern interpretation of the triple headlamp cluster typical of all Aprilias stands out to favour stark and clearly sporty lines.

The electric motor is positioned in the central area and powers a chain final drive. The keyless system, the LCD instrumentation, and phonic wheels in the rims introduce the theme of technology aimed at practicality. 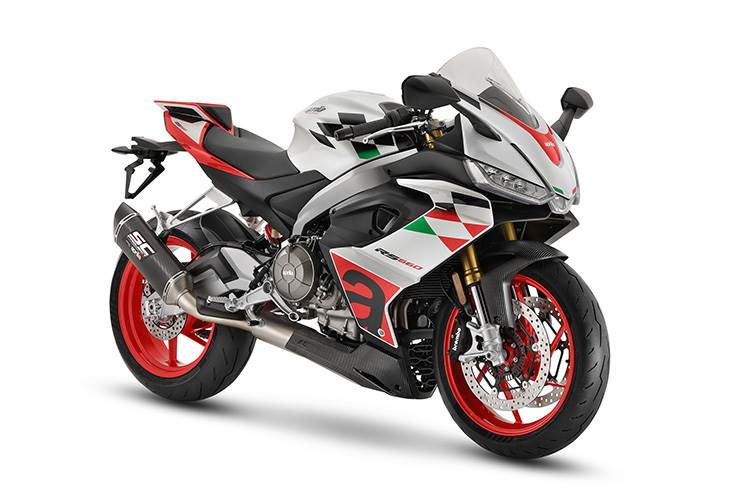 Also contributing to the overall reduction in weight are the front mudguard and the new under cover below an engine with a brand-new design, both made of high quality carbon.

In addition to the standard electronics on the RS 660 (traction control, cornering ABS, engine brake, engine map, and wheelie control), the RS 660 Extrema also has software that allows setting up of quick shifts in upside-down configuration.

Moto Guzzi V100 Mandello
The V100 Mandello opens an entirely new chapter in Moto Guzzi history. It is the first Moto Guzzi to be powered by the new ‘compact block’ engine, with its refined technical characteristics. The V100 Mandello develops 115hp at 8700rpm and maximum torque of 105 Nm at 6750 rpm. Its sporty character is supported by a compact and agile chassis architecture, whereas its touring attitude benefits from the generous saddle and active, relaxed riding position. 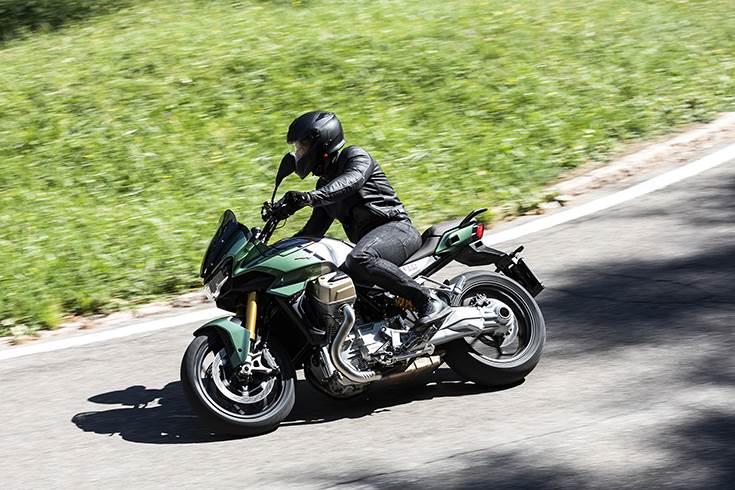 The electronics package comprises Ride by Wire electronic accelerator for precise performance and consumption control, advanced Marelli 11MP ECU, the six-axis inertial platform for effective management of the electronic controls, cruise control, and Cornering ABS to ensure active safety when braking through the turns. Four Riding Modes are available – Touring, Sport, Rain, and Road. Each of these manages three different engine mappings, four levels of traction control, three levels of engine brake and (in the version that introduces them as standard) also calibration of the Ohlins Smart EC 2.0 semi-active suspension, which can adapt automatically, minute by minute, to suit the type of riding and the road conditions, for the best possible bike behaviour in any situation.

Moto Guzzi V7 Stone Special Edition
The classic V7, one of the best-selling Moto Guzzis, now gets a Special Edition. It forsakes the matte shades typical of the Stone version to flaunt a special Shining Black colour scheme, enhanced on the tank with graphics and red details that recall the style traits of the Eagle brand's sportiest models. 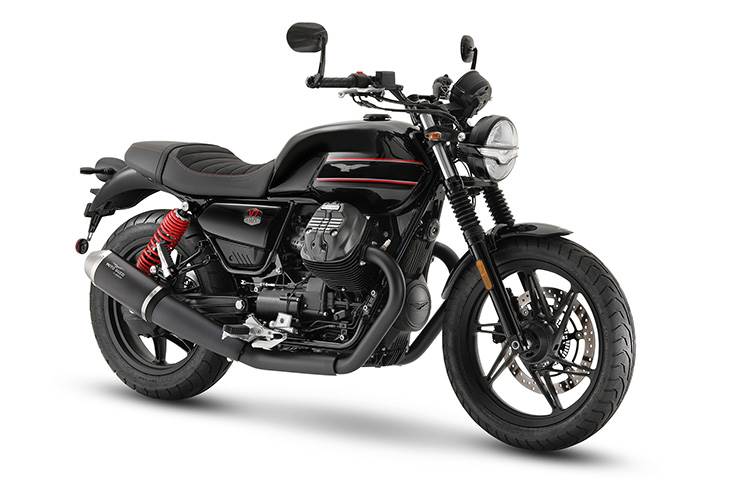 Moto Guzzi V9 Bobber Special Edition
This is the special version of V9 Bobber, the sporty custom from Moto Guzzi that introduced the medium displacement bobber genre, characterised by the almost entirely total black of every component and wide oversize tyres that guarantee ample contact with the ground, just like the ones mounted on the motorcycles in the second post war era in the States which race on fast dirt tracks. The V9 Bobber Special Edition equipment package is a true custom job and boasts special Workshop twin-tone black and grey colour scheme.

Piaggio 1 MY23
The minimalist, lightweight Piaggio 1 electric scooter is designed for urban commuting. The technological package includes digital colour instrumentation, full LED lighting, and a keyless system. Piaggio 1 is also the only e-scooter in its category with a spacious under-seat storage compartment, large enough to hold a full jet helmet. 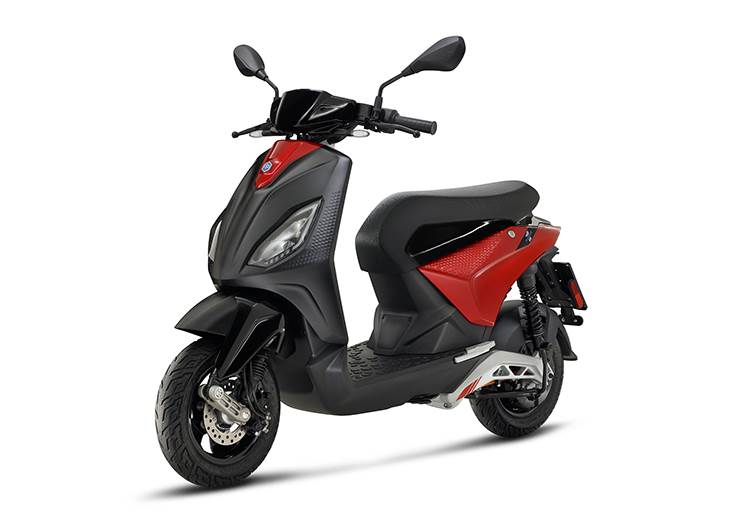 Thanks to the changes made to the Power Unit, the electric motor that powers Piaggio 1 range, built in on the rear wheel, is now capable of providing better performance. The moped version (Piaggio 1), with speed limited to 45kph, can now count on almost double the peak power at 2.3 kW, whereas the motorbike version (Piaggio 1 Active) reaches 3 kW peak power. The result is a significant increase in acceleration which goes up 14% on the Piaggio 1 and almost 12% on Piaggio 1 Active.

With both versions, the battery is located beneath the seat, easily removable in just a few seconds and portable so it can be conveniently charged at home or in the office.

Vespa GTS
The Vespa GtS range remains one of the world's best-loved two-wheelers as it follows on from the legendary ‘Vespone’, the name given to those Vespas with a larger, strictly steel body.

The new GTS’ ‘neck tie’ on the front shield is new, as well as the metallic profiles of the body, and the entire lighting system is fully LED. The rear part has also been revisited, introducing new side panels, a new license plate bracket, and new shapes for the lighting system. Also brand new are the mirrors, the handlebar, now wider and ergonomic, and the electrical controls, whereas new instrumentation has been introduced that contains even more information, and the keyless system. The saddle is also new, more comfortable and more refined, which allows the riders feet to rest better on the ground. In terms of comfort, the new Vespa Gts gets a new front suspension with more controlled operation and better capability to absorb any type of bump. ABS and the rear wheel traction control system come standard. There are four versions in the range and 14 colours.

Two engines are available for the new Vespa GTS: the 300 hpe, capable of almost 24 hp, the most powerful engine ever mounted in a factory Vespa, and the 125 of the i-get series, featuring Start & Stop, strong performance, and low fuel consumption. 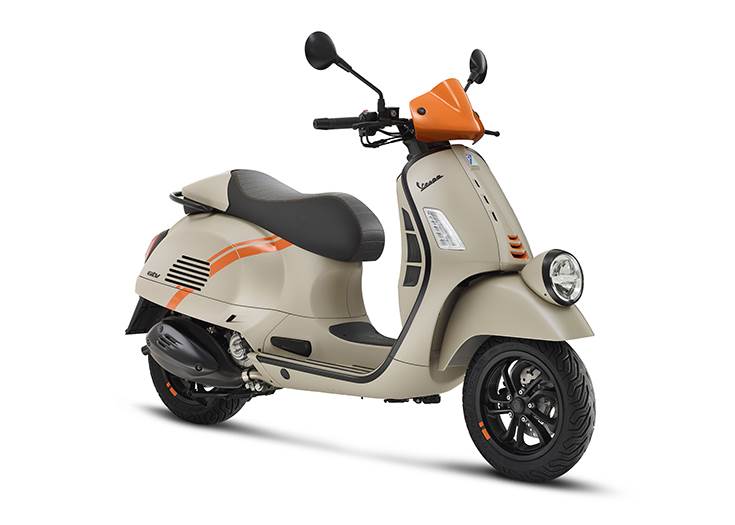 Vespa GTV
Built on the Vespa GTS base, the Vespa GTV (pictured above) is reborn with a completely new look, maintaining the inevitable traits of the legend's origins, but combining them with an ultra modern technological equipment package and brand new sporty finishes. 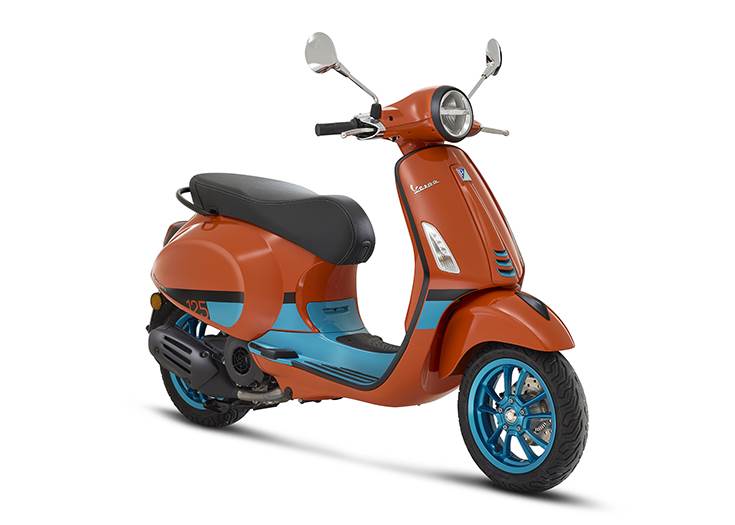 An original contrasting colour ‘stain’ which, outlined in black, runs diagonally across the entire body through the dedicated graphics on the sides of the front shield and side panels. The decorations of the typical steering cover on the front shield are also in Ottanio, as well as the exclusive wheel rims, made only for this version in a special glossy metallic finish.

Vespa 946 10° Anniversario
Ten years on, Vespa 946 makes its debut in the special 10° Anniversario outfit, with an exclusive dedicated colour that’s a modern take on a classic Vespa shade, green. 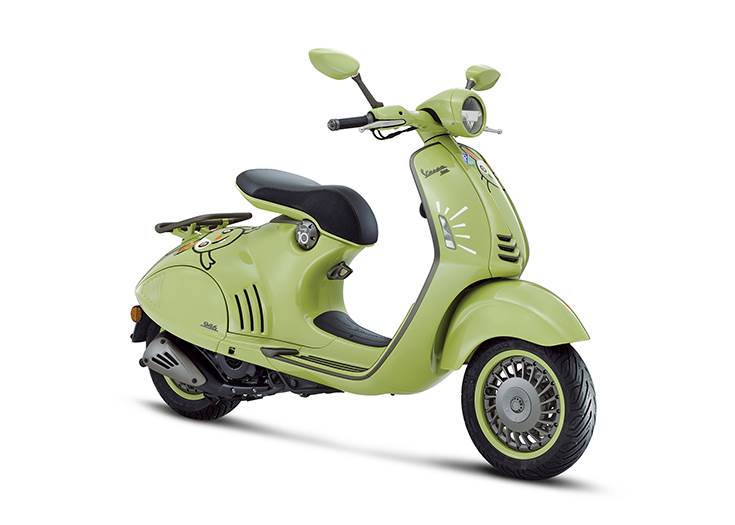 Sales of over 410,000 two-wheelers in first 9 months of 2022
The Piaggio Group, which has a presence in India, is consolidating its position as the top European and Italian two-wheeler group. As of September 30, 2022, the Group had sold 490,400 vehicles all over the world (including 410,000 two-wheeled vehicles) this year, recording a turnover of 1,626.9 million euros (Rs 13,275 crore) and net profits of 70.9 million euros (Rs 579 crore), the highest values ever in the reference period. In the first 9 months of 2022, the Piaggio Group has consolidated its leadership in Europe in the scooter segment with a share of 23.5% and it further reinforced its position in the North American scooter market, reaching a share of 34.9%.

The scooter sector increased to double digits in global sales, driven particularly by the Vespa brand, which recorded turnover increasing to double digits and the record sales volume for the period, and by the Aprilia brand scooters.

The motorcycle segment was also extremely positive: both Aprilia and Moto Guzzi filed record sales in the first nine months of the year with the highest ever volumes and profits, thanks in part to the significant popularity of the new Aprilia 660 units (RS, Tuono and Tuareg) and the Moto Guzzi V7 and V85 TT.