Mercedes-Benz to go all-electric by 2030 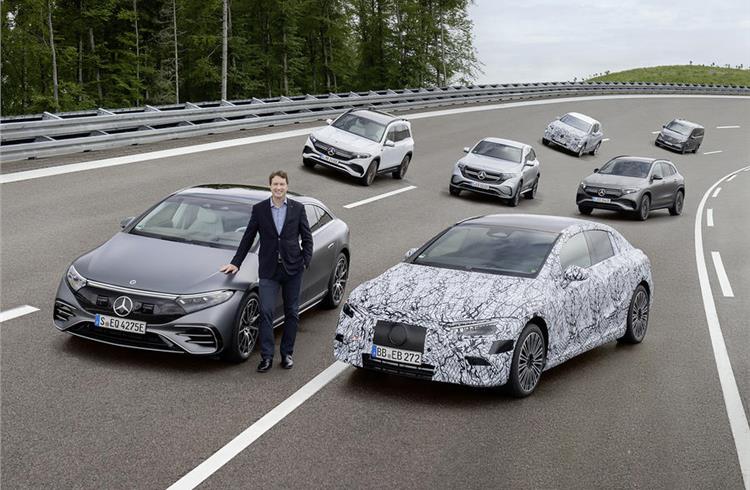 Mercedes-Benz has revealed an ambitious plan to go all-electric by 2030 "where market conditions allow”. Included in a wide-reaching strategy announcement today, were plans on how it will ramp-down investment in combustion engines and reduce EV manufacturing costs.

Most notably, it will introduce four all-new and bespoke EV platforms by 2025, and has committed to building eight new battery factories worldwide.

To prioritise profit over volume, Mercedes is aiming to increase sales of top-rung models and standardise majority of components it uses in vehicle production.

All Mercs to have a full-EV option from 2025
Mercedes will offer a battery-electric vehicle in all segments from 2022, and from 2025, the company promises to offer an EV option for all its models.

Following the 2024 launch of the new MMA EV architecture for small vehicles, which will likely underpin an electric C-class, all Mercedes vehicle platforms developed will be EV-only, and in 2025, it will launch three all-new architectures catering to its entire portfolio.

The new MB.EA platform will underpin medium and large passenger vehicles, such as SUVs. The AMG.EA architecture will – as the name suggests – be developed by Mercedes' in-house performance division for future electric sports cars, while the VAN.EA platform will be used for light commercial vehicles (LCVs).

Following the 2021 global launch of the EQA, EQB, EQS sedan and EQV, Mercedes will launch the new EQE sedan, EQE SUV and EQS SUV in 2022 in international markets, giving it a total of eight full-EVs in the passenger car segment, including the existing EQC.

Two new versions of the EQS sedan are also due imminently: an AMG-badged performance option and a Maybach luxury range-topper.

New-era batteries and gigafactories
To support this rapid EV expansion, Mercedes has committed to building eight new battery 'gigafactories' worldwide, one of which will be in the US, along with four in Europe, for a total production capacity of 200GWh. This expansion, Mercedes said, comes in addition to existing plans for "nine plants dedicated to building battery systems".

Mercedes' next-generation batteries will be "highly standardised and suitable for use in more than 90 percent of all Mercedes-Benz cars and vans". It plans to increase energy density using silicon-carbon anode technologies to offer "unprecedented range and even shorter charging times".

Notably, the firm claims it is "in talks with partners" to develop solid-state battery technology, which will markedly improve energy density and safety.

Massive investment to go all-electric
CEO Ola Kallenius said, "The EV shift is picking up speed - especially in the luxury segment, where Mercedes-Benz belongs. The tipping point is getting closer and we will be ready as markets switch to electric-only by the end of this decade.” Moreover, while the company was earlier aiming to sell 25 percent hybrid and electric vehicle by 2025, it has now revised that target to 50 percent.

As part of its plan, Mercedes-Benz has committed more than 40 billion euros (about Rs 3.5 lakh crore) to the development of new electric vehicles between 2022 and 2030. Despite the heavy investment, the company is confident on maintaining its profitability.

To maintain profit margins, Mercedes will raise the proportion of high-end Maybach and AMG models sold, and generate more revenue through digital services.

Using the new modular platforms across its model portfolio will help to increase standardisation, and thereby reduce manufacturing costs, for all models, and – Mercedes said - battery costs are expected to fall significantly, further reducing production costs.

By 2026, Mercedes expects its investment in combustion engines to fall by 80 percent compared to 2019 levels.

Mercedes’ electrification plans for India
For now, Mercedes-Benz has not specifically commented on its plans for the Indian market. However, alluding to the future of combustion engines, Britta Seeger, who is a member of the Board of Management at Daimler AG and responsible for marketing and sales of Mercedes-Benz cars, said, “Of course, no one can foresee when the last combustion engine will be sold because that depends on the customers and their respective local market conditions."

This, in addition to the fact that Mercedes plans to go all-electric only where “market conditions allow”, means that India is likely to continue seeing petrol and diesel models from the German marque for a little while longer.

The company is, however, slowly increasing its electrification efforts even in our market. Following the launch of the EQC SUV last year, it is now gearing up to bring in the flagship EQS sedan in early 2022. In a recent interview, Mercedes’ India chief said that the automaker continues to evaluate other electric models for our market, and is even looking into assembling EVs in India.

(With inputs from Autocar India)