The company claims that with fuel cell the van could deliver long range, low system weight and fast refuelling. 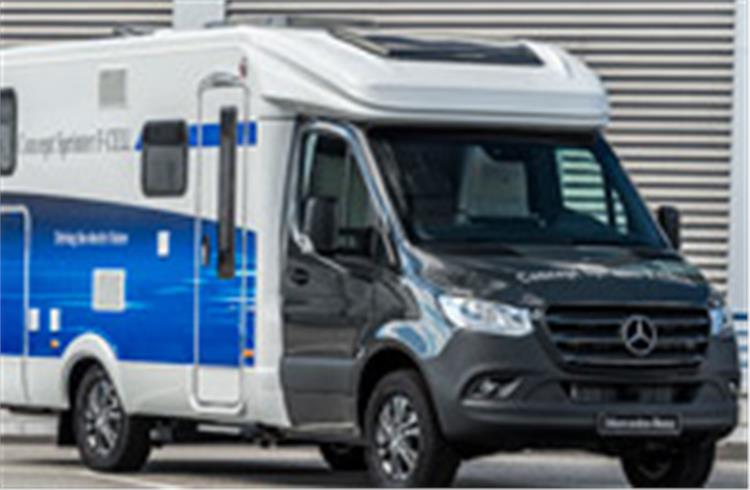 Volker Mornhinweg, head of Mercedes-Benz Vans said, “We will offer every commercial range with an electric drive – starting this year with the eVito and in 2019 with the eSprinter. With these, we will already cover many, but not all, use cases with a zero-local-emissions powertrain. For this reason, we are enhancing our 'eDrive@Vans' strategy with fuel-cell drive, which offers substantial medium-term opportunities, especially in long-distance operation – regardless of whether a fuel-cell vehicle is used as a motorhome or in other commercial applications.”

The company claims that the intelligent interaction of battery and fuel cell drives in the Concept Sprinter F-CELL delivers an electric output of around 147 kW and torque of 350-newton metres. It has three tanks in the substructure with a capacity of 4.5 kilograms for hydrogen. This is said to be enough for a range of around 300 kilometres. There is provision for installing another hydrogen tank in the vehicle body at the rear, thus aiding for a longer range, which is claimed to be as much as 500 kilometres. Like the GLC F-CELL SUV showcased at the 2017 Frankfurt International Motor show, the Concept Sprinter F-CELL also combines innovative fuel cell and battery technology to create a plug-in hybrid. Alongside hydrogen, it can also be “refuelled” with electricity, raising the range by up to 30 kilometres.

The integration of the hydrogen tank in the substructure, the positioning of the fuel cell at the front of the vehicle and the rear-wheel drive is said to create the basis for maximum interior design freedom. With a standalone energy supply for the living quarters or longer range, the technology showcase makes full use of its merits as a travel companion or, in other applications, as a spacious load carrier.

As the structure of the Concept Sprinter F-CELL comes with rear-wheel drive and a comparably low system weight, the motorhome could undertake additional bodies and conversions. For commercial use, this translates into higher payload capacity. The modular system means the fuel cell can establish itself as an alternative to conventional and battery-electric drives for use on shorter routes in as many use cases as possible.