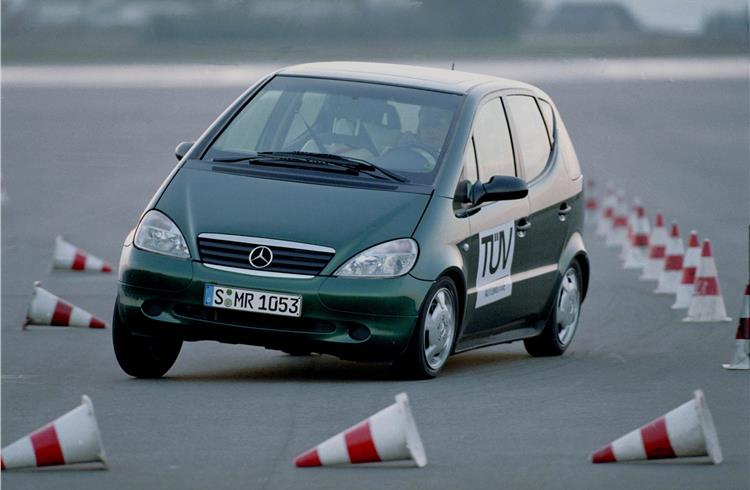 It’s just over 20 years when Mercedes-Benz introduced the Electronic Stability Program (ESP). Alongside the seatbelt, airbag and ABS, the Daimler invention is by far the most significant safety system of modern passenger cars and over the years has helped to save the lives of several thousand people. ESP has been mandatory for new passenger cars in Europe since November 2011.

It was with ABS (1978) and acceleration skid control (1985) that Mercedes-Benz began to control dynamic driving processes with electronic systems for the first time. The next step followed in 1995: additional sensors that recognise the driver's directional intentions (steering angle sensor) and whether the car is sliding sideways (lateral acceleration sensor), or is in the process of rotating around its own vertical axis (yaw rate sensor), provided the basis for the Electronic Stability Program (ESP). From March 1995, this worldwide innovation was fitted as standard on the S 600 (C 140) luxury Coupé. A few months later came its application in the S-Class Saloon (W 140) and the SL Roadster (R 129). The V12 models had the safety system as standard, while for the V8 models of this series it was initially available as an option.

However, it was in 1997 that the rapid spread of safety technology began: a Swedish car tester exceeded the critical limits of driving dynamics by causing the new compact A-Class to overturn during an abrupt evasive manoeuvre (‘Elk test’). What at first seemed to be a setback for Mercedes-Benz became a triumph: in 1997 the company systematically made ESP standard equipment – first for the A-Class, then for all its models. All the other manufacturers had to follow suit: following a directive by the European parliament and the Council dated 13 July 2009, it has been mandatory to equip all passenger cars and light commercial vehicles newly registered in the EU with ESP as standard since November 2011.

"Alongside the seatbelt, the airbag and ABS, ESP is by far the most significant safety system of modern passenger cars," stresses Prof. Dr Thomas Weber, Member of the Board of Management of Daimler AG and responsible for Group Research and Mercedes-Benz Cars Development. As a safety pioneer, Mercedes-Benz invented skid protection. Precisely how the bold idea found its way into series production is described by Frank-Werner Mohn, one of the fathers of ESP, in an interview.

The introduction of ESP was a significant step towards reducing accident rates: according to estimates made as early as 2008 by accident researchers of the German Insurance Association (GDV), if all cars had been fitted with such a stability program then each year in Germany alone around 37,000 accidents resulting in injuries and 1100 accidents resulting in deaths could have been completely avoided or their consequences significantly reduced. Based on these figures, ESP has already helped to save the lives of several thousand people throughout Europe.

How ESP works
ESP helps the driver in situations in which he or she risks losing control of the vehicle. If it detects a critical dynamic driving situation, it specifically applies the brakes to one or more wheels according to the situation and requirements. In addition, if the system detects it to be necessary, the engine torque is automatically adapted. In this way, ESP helps the driver to stabilise the vehicle once again – particularly when cornering and in sudden evasive manoeuvres. At the heart of the stability program is a yaw rate measurement unit. It constantly monitors the movement of the vehicle around its vertical axis and compares the actual value which is measured against the specified value, based on the steering input of the driver and the speed. As soon as the vehicle deviates from this ideal line, ESP intervenes and controls any skidding movements as soon as they arise. How ESP has advanced
A quicker and more finely dosed build-up of brake pressure, a control unit with greater processing power, more compact components, new algorithms – in two decades ESP has been continually enhanced. A key milestone was the introduction of electric power steering: while only brake intervention and a reduction in engine torque were possible up until this point, from 2005 steering input also began to play a helping hand in vehicle stabilisation.

However, it is in the area of the fine-tuning of the ESP system that the most noticeable advances have been made for car drivers: whereas the electronics of the first A-Class were still somewhat radical in bringing it to a virtual standstill, in the meantime ESP has been developed to intervene in a very cautious manner, keeping the vehicle on the road with minimal loss of speed.

And the 3-stage-ESP of the sporty Mercedes-AMG models even boasts tailor-made transmission modes: with ‘ESP ON’, ‘SPORT Handling Mode’ and ‘ESP Off’, the dynamics of the vehicle can be modified at the press of a button.

Fully in line with Mercedes-Benz’s ‘Intelligent Drive’ philosophy, ESP has also come to include numerous sub-functions and to serve as the basis for further assistance systems. The following is an overview (in alphabetical order):

Adaptive Brake: extends the functions of ESP with a convenient Hill-Start Assist system and the Hold function which automatically prevents the vehicle from unintentionally rolling forwards or backwards.

Active Lane Keeping Assist: takes lane-correcting action in the form of one-sided brake intervention via ESP if an unintentional lane change occurs by driving over solid lines and also if the risk of a collision is detected when the adjacent lane is occupied when overtaking while driving over broken lane markings.

Active Blind Spot Assist: can contribute to avoiding an impending side collision at the last moment, or to reducing the severity of an accident by means of one-sided brake intervention.

Crosswind Assist: is able to compensate for the vehicle veering out of its lane by means of one-sided ESP intervention (on vehicles without Active Body Control).

Downhill Speed Regulation (DSR): is able to maintain a slow, manually adjustable vehicle speed on demanding downhill stretches. This is done with the help of the engine and transmission control systems, and by specific braking intervention.

Dynamic Cornering Assist: if the ESP sensors register a tendency to understeer, the stability programme initiates specific braking intervention on the inside rear wheel. This causes a slight yawing motion of the vehicle around its vertical axis.

Trailer Stability Assist: if necessary, actively dampens oscillating motions by applying the brakes to the front left and right wheels individually and alternately, and/or slows down the towing vehicle at critical speeds.