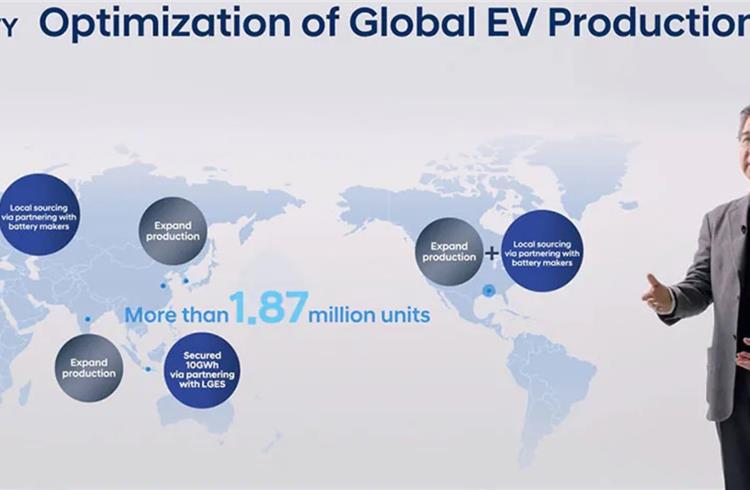 Unveiling its roadmap at the ‘2022 CEO Investor Day’ virtual forum, the company also unveiled targets for sales and financial performance to be achieved by 2030. The roadmap for Hyundai’s battery electric vehicle (BEV) is supported by strengthening BEV line-ups, optimising manufacturing capacity and securing hardware and software competitiveness.

President and CEO Jaehoon Chang said, “Hyundai is successfully accelerating its transition to electrification and becoming a global leader in EVs despite a challenging business environment caused by the global chip shortage and ongoing pandemic.”

Hyundai plans to introduce 17 BEV models; 11 Hyundai marque models along with six models from Genesis luxury brand by 2030 as it seeks to expand BEV spectrum. The new Hyundai BEV models will include three sedan models, six SUVs, one light commercial vehicle as well as one new type model. This year, Hyundai begin sales of IONIQ 6, followed by Ioniq 7 in 2024.

Beyond existing BEV production facilities centered in Korea and the Czech Republic, Hyundai plans to gradually expand its BEV manufacturing bases. The Indonesian plant will start BEV production this year.

The company is also trying to increase the local procurement rate of batteries through strategic alliances with battery companies in major regions, including the U.S., to secure sufficient battery supply. Through these alliances, the company expects to obtain more than 50 percent of its next-generation lithium batteries for BEVs starting in 2025.

In addition, Hyundai will also diversify battery sourcing to consolidate the competitiveness of future BEVs. The company has secured sufficient battery supply to meet its sales targets by 2023. Hyundai plans to continue cooperation with various battery companies with an aim of securing 170 GWh of batteries for its models, including Genesis luxury brand by 2030.

Hyundai Motor plans to introduce an Integrated Modular Architecture (IMA), evolved from the electric global modular platform (E-GMP) that is the foundation of IONIQ 5 and GV60. Standardised five type of motors also will be installed on IMA according to model needs. This modular motor system can secure competitiveness in terms of cost and weight as well as motor efficiency.

The company plans to apply an over-the-air (OTA) update to new models that will be launched starting at the end of 2022, and expand it to all Hyundai models by 2025. In addition, the number of integrated control units can be reduced by one-third by 2030. By 2030, the company will invest a total of 12 trillion Korean won to boost competitiveness in software capabilities. After 2030, the company targets the revenue from software-related businesses to take approximately 30 percent of total sales.