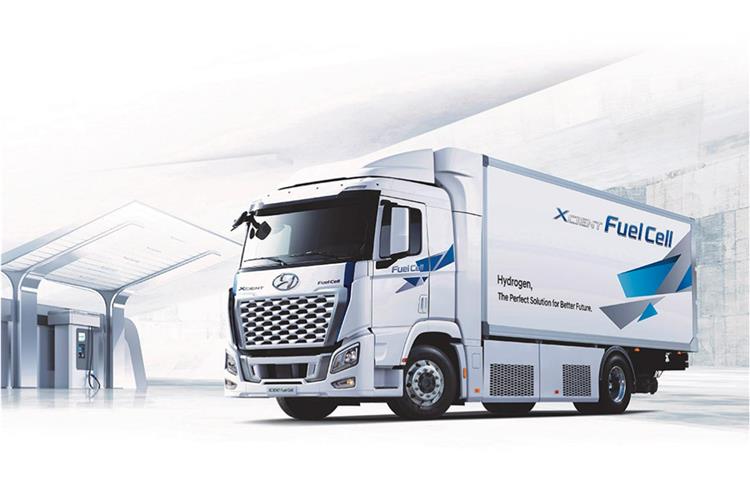 Hyundai Motor Company has announced that its heavy-duty, hydrogen-powered Xcient Fuel Cell truck is entering Israel, its first Middle East market, to establish a hydrogen value chain in the region.

Hyundai Motor has supplied three Xcient Fuel Cell trucks to Israel as part of a partnership between its Israeli agency Colmobil, hydrogen producer Bazan and hydrogen refueling station operator Sonol to form a hydrogen value chain in Israel. The three heavy-duty trucks will be handed over to Colmobil, Bazan and Sonol, respectively, and will be put into commercial operations in the first quarter of 2023.

The first vehicle to be used for commercial operations in the Middle East is a 4x2 Xcient Fuel Cell truck delivered to Colmobil, equipped with a 180-kW hydrogen fuel cell system that can travel over 400 km on a single charge. It will be used to procure parts for Colmobil, with a daily operation range of about 330km.

Hyundai Motor plans to accelerate the establishment of a hydrogen value chain in Israel. The plan aligns with Israel’s Nationally Determined Contribution (NDC) updated in 2021, committing to slash its national greenhouse gas emissions by 27 percent by 2030 and by 85 percent by 2050, relative to 2015 emission levels.

“We are thrilled to support the Israel government’s strong commitment to build a sustainable future with our hydrogen-powered, heavy-duty Xcient Fuel Cell truck,” said Mark Freymueller, Senior Vice President and Head of Commercial Vehicle Business Innovation of Hyundai Motor Company. “Establishing the first hydrogen infrastructure in Israel in close collaboration with the country’s key players marks a significant milestone in our efforts to build a sustainable hydrogen value chain around the world. We are confident that our fuel cell trucks will substantially contribute to the acceleration of the energy transition in Israel.”

The Xcient Fuel Cell is the world’s first mass-produced heavy-duty hydrogen electric truck and is currently being used in real-world commercial operations in Germany, Switzerland, Korea and New Zealand. The 47 units operating in Switzerland since October 2020 have achieved a cumulative mileage of over 5 million km through October this year, proving the truck’s reliability. Additionally, Hyundai Motor will deploy five Xcient Fuel Cell trucks for the 2021 Targeted Airshed Grants (TAG) program and 30 units for the NorCAL Zero project, both in the U.S., during the third quarter of next year.