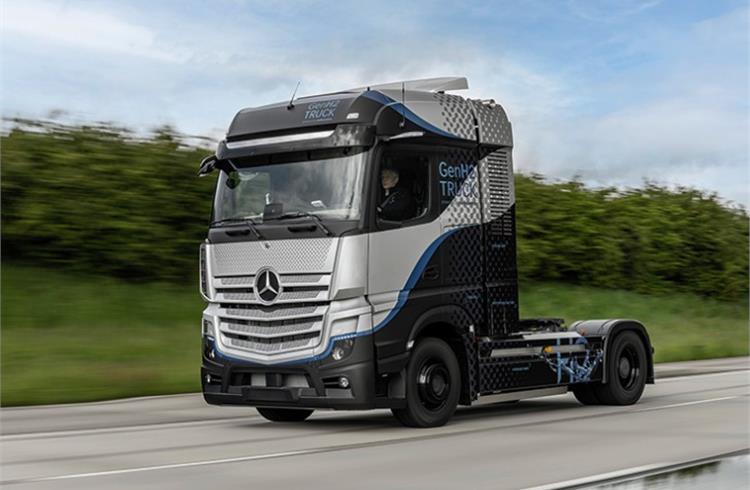 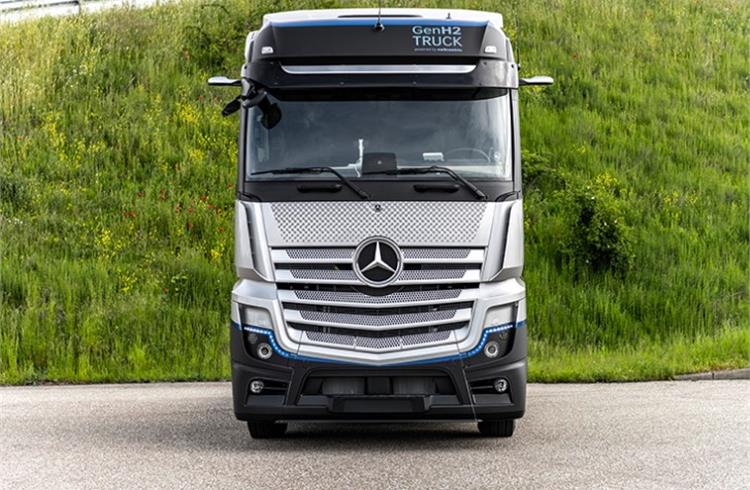 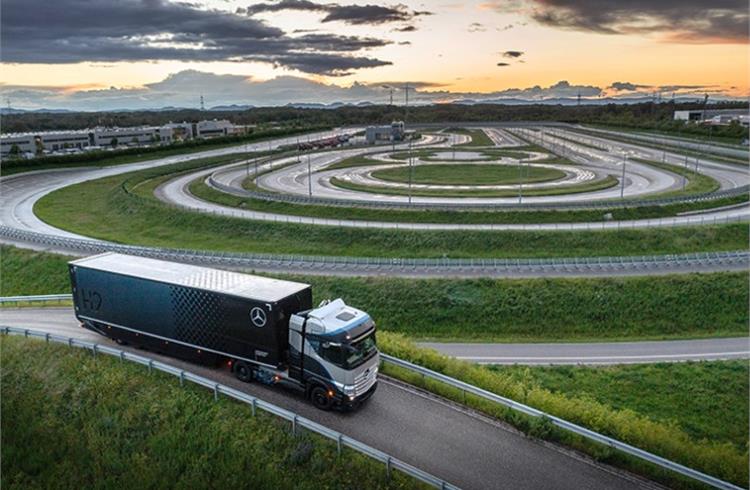 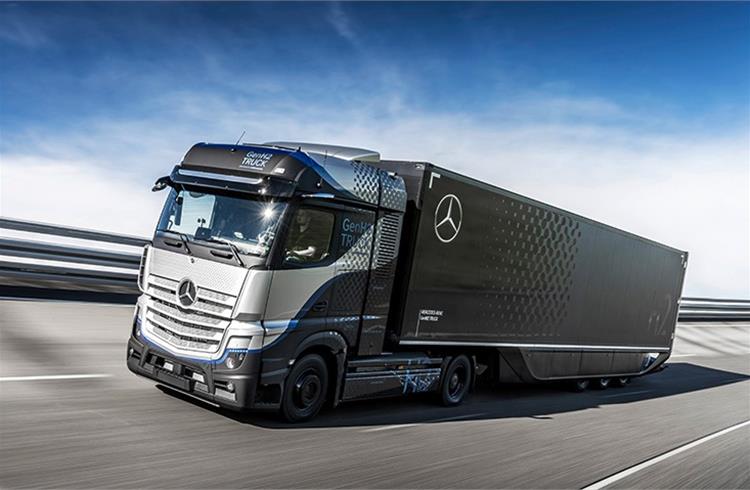 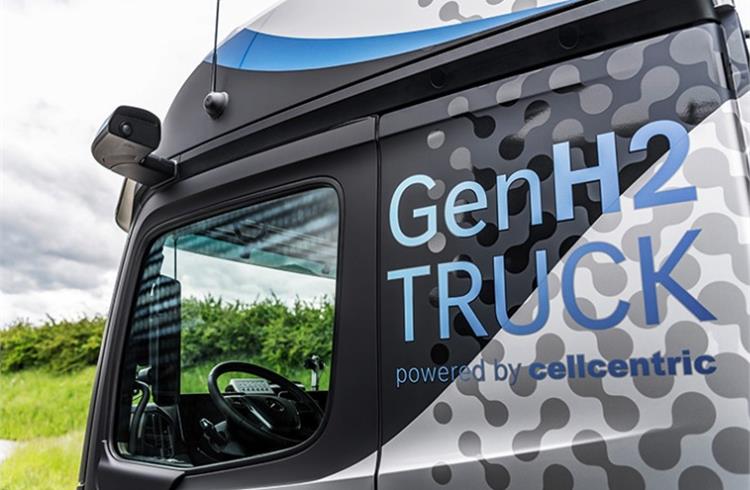 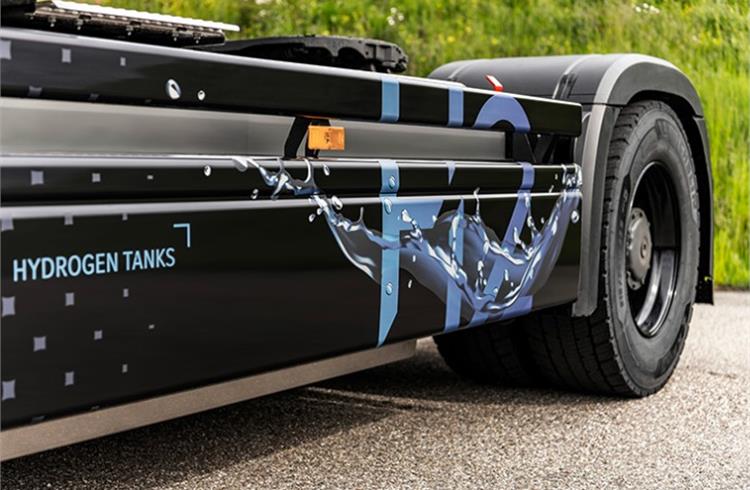 Daimler Trucks, which is focusing on hydrogen-powered fuel-cells for the electrification of its vehicles for flexible and demanding long-haul transport, hs begun testing its fuel cell truck. It aims to achieve ranges of up to 1,000 kilometres and more without any stops for refuelling.

In late April, the truck manufacturer began to conduct rigorous tests of the first new enhanced prototype of its Mercedes-Benz GenH2 Truck, which was unveiled in 2020. This marks an important milestone on the path to series production. During these tests, the developers at Daimler Trucks are putting the fuel-cell vehicle through its paces. The extensive series of tests is very demanding for the vehicle and its components, and focusses, among other things, on continuous operation, different weather and road conditions, and various driving manoeuvres.

According to Daimler Trucks’ development plan, the vehicle will also be tested on public roads before the end of the year. Customer trials are scheduled to begin in 2023. The first series-produced GenH2 Trucks are expected to be handed over to customers starting in 2027.

Martin Daum, Chairman of the Board of Management of Daimler Truck AG, said: “We want to offer our customers the best locally CO2-neutral trucks — powered by either batteries or hydrogen-based fuel-cells, depending on the use case. We’re right on schedule and I’m delighted that the rigorous tests of the GenH2 Truck have started successfully.”

“The hydrogen-powered fuel-cell drive will become indispensable for CO2-neutral long-haul road transport in the future. This is also confirmed by our many partners with whom we are working together at full steam to put this technology on the road in series-production vehicles. Moreover, considerable momentum is being generated by the clear commitment of national and European regulators to the use of hydrogen for road freight transport. Political support plays an important role in promoting the creation of an infrastructure for green hydrogen and making an economically viable use of fuel-cell trucks possible for our customers,” Daum adds. 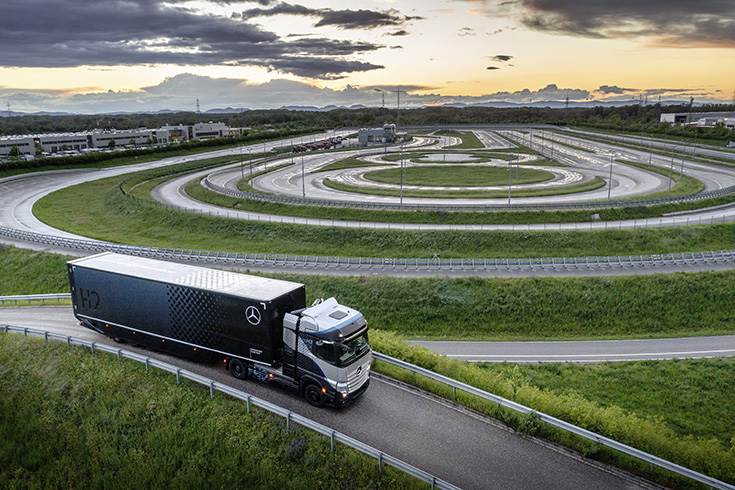 Testing for 1.2 million kilometres underway
Daimler Trucks’ development engineers are designing the GenH2 Truck so that the vehicle and its components meet the same durability requirements as a comparable conventional Mercedes-Benz Actros. This means 1.2 million kilometres on the road over a period of 10 years and a total of 25,000 hours of operation. During the first few weeks of testing, the vehicle has already covered hundreds of kilometres under continuous load on a road-to-rig test stand and gone through many extreme situations that are based on real-life operating conditions. Examples include emergency braking and kerbstone drives along the test track. New vehicle concept and new components
The GenH2 Truck has been newly designed from the ground up. It features completely new components, which the developers are particularly focusing on during the tests. These components include the fuel-cell system, the all-electric powertrain, and all of the associated systems such as the special cooling unit.

In addition, the new components’ specific weight and position in the vehicle affect the truck’s handling properties. As a result, the vibrations caused by bumpy roads, for example, and especially by extreme situations, subject the fuel-cell truck to different forces than those in conventional vehicles. In order to obtain extensive information about this at an early stage, the current prototype is loaded during the tests with a payload of up to 25 tons for a gross vehicle weight of about 40 tons, which is identical with the specifications planned for the series-produced variant of the GenH2 Truck.

Liquid hydrogen comes with benefits
Daimler Trucks says it prefers to use liquid hydrogen because in this state, the energy carrier has a far higher energy density in relation to volume than gaseous hydrogen. As a result, the tanks of a fuel-cell truck using liquid hydrogen are much smaller and, due to the lower pressure, significantly lighter. This gives the trucks more cargo space and a higher payload. At the same time, more hydrogen can be carried, which significantly increases the trucks’ range. This makes the series GenH2 Truck, like conventional diesel trucks, suitable for multi-day, difficult-to-plan long-haul transport and where the daily energy throughput is high.

The experts at Daimler Trucks are forging ahead with the development of tank technologies for liquid hydrogen on the basis of a predefined development plan. By the end of the year, the engineers plan to have the new prototype tank system sufficiently mature to be used to continue the ongoing demanding tests of the GenH2 Truck. The vehicle tests will then be conducted exclusively with liquid hydrogen tank systems until the series-production stage is reached. Until this can be done, the extensive internal testing of the GenH2 Truck will use a gaseous hydrogen tank system as an interim solution. Daimler Trucks is thus demonstrating that both variants - gaseous and liquid - can be technically implemented.