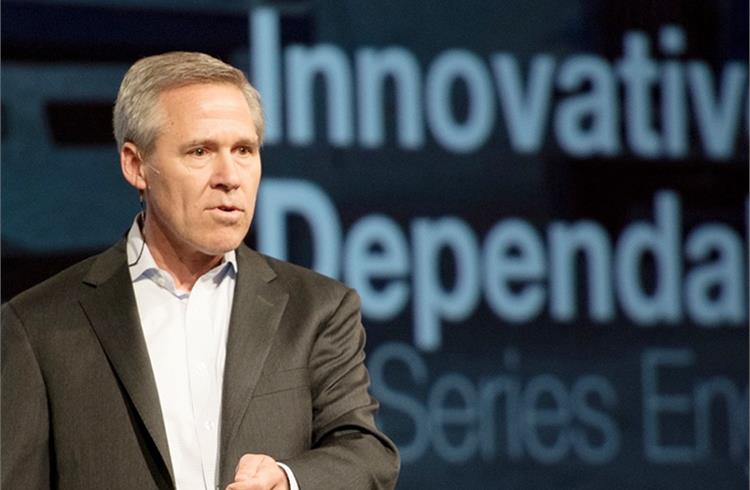 Innovation in both internal combustion and alternative technologies is the best way to achieve environmental benefits today and a carbon-neutral future, a Cummins leader told a U.S. Senate committee last Tuesday.

“The future of power requires multi-faceted innovation,” Satterthwaite told a hearing of the Senate Energy and Natural Resources Committee, testifying virtually because of the pandemic. “Our customers need the right vehicles and equipment to do their work today and in the future.”

Achieving gains from existing technologies
With an eye on the future, Cummins has been making a significant investment in battery and fuel cell electric powertrains in recent years, holding its first Hydrogen Day in 2020 to showcase for nearly 2,000 analysts, media members and potential customers, the company’s progress with products using the promising low-carbon fuel.

But experts say the conversion to low-carbon technologies won’t happen overnight. It will take time, for example, to develop enough refuelling and recharging stations for widespread adoption. Satterthwaite said there are environmental benefits that can be achieved today with existing technologies such as advanced diesel and natural gas engines as the infrastructure develops for low- and no-carbon powertrains.

Over the next decade, high efficiency internal combustion engines with mild hybridisation and low-carbon fuels can reduce both carbon dioxide (CO2), a major greenhouse gas (GHG), and criteria pollutants while providing customers with performance, reliability, and affordability.

Advanced internal combustion engines would enable the country to make significant progress on issues like climate change as the necessary government investment ramps up to achieve widespread adoption of low- and no-carbon platforms, Satterthwaite said.

The path to zero emissions
The executive testified that reaching a zero emission future will require government leadership in addition to commitment from manufacturers like Cummins.

“This is critical to success on our path to zero emissions,” Satterthwaite testified. “If the U.S. is to achieve this path to zero in a way that is cost effective, timely and promotes U.S. jobs and manufacturing, significant public support is needed from DOE (the Department of Energy), our national labs and other research institutions to innovate in infrastructure, development and deployment.”

Satterthwaite made a special pitch to the committee for renewable hydrogen during his testimony, maintaining it should be part of the government’s plans moving forward.

“Cummins has invested significantly in the entire hydrogen value chain because it has shown to be one of the most effective enabling technologies for broad and deep decarbonisation of hard-to-abate sectors where Cummins’ products operate,” he said. “Europe and East Asia have an early lead in this space, having committed hundreds of billions of dollars respectively to promote decarbonised hydrogen production and fuel cell equipment deployment.”

For example, hydrogen fuel cells are seen as generating the kind of energy necessary to power passenger trains, so rail systems wouldn’t have to string electric wire overhead for long distances to get the low-carbon benefits of electrification.

Looking ahead
Satterthwaite said additional public-private partnerships such as the SuperTruck initiative, which has led to significant advances in fuel efficiency for diesel engines, could be a cost-effective way to encourage development of the new technologies critical to addressing climate change.

“A new SuperTruck III program will build upon these improvements with the focus on CO2-reducing technologies such as efficiency improvements, low carbon fuels, hybridisation, battery electrification and fuel cell optimisation for entire fleets,” Satterthwaite said in his testimony.

The Cummins executive concluded by encouraging the committee to avoid choosing a single technology as the best way to move forward.

"Enacting policies that promote the power of choice for every market will help ensure that this country and every community within it has the proven technology necessary to serve the economy while meeting air quality and climate goals on the path to net-zero emissions," he said.