The special feature of the modular driver’s workplace is the combination of up to three displays with two freely configurable control panels. German Tier 1 supplier, Continental will showcase its modular driver workplace (mDWP), which it says brings bring the digital age to the bus cockpit, at the IAA Commercial Vehicles 2018, Hannover, Germany.

The company states that in city and intercity buses, the mDWP will make the daily work of bus drivers more ergonomic, more comfortable and safer, fleet operators will be able to operate more flexibly, while vehicle manufacturers can stock fewer parts. “Digitalisation concepts and thinking in systems are core competencies of Continental. We have succeeded in bringing the driver’s workplace into a new digital dimension. This benefits drivers and manufacturers alike,” said Dr Michael Ruf, Head of the Business Unit Commercial Vehicles and Aftermarket at Continental.

Continental’s concept fits seamlessly into the design concepts of the latest vehicle generations of city buses and has already won the ‘iF Product Design Award’ and the ‘German Design Award’. The digital displays give manufacturers complete freedom in the arrangement and programming of the various displays and control panels, which the company says provides driver workplaces that can be fully adapted to the respective requirements of the transport company. The first units are already being delivered to bus manufacturers and serial production will start in early 2019. In addition to bus manufacturers, manufacturers of electrically driven municipal vehicles, agricultural machinery and construction vehicles are also showing a great deal of interest in the workplace.

Relevant information in every situation
As per Continental the special feature of the modular driver’s workplace is the combination of up to three displays with two freely configurable control panels. As a central unit, the fully programmable 12.3-inch TFT display (MultiViu Professional 12) displays various combination instruments and information such as camera images in its basic configuration. It is supplemented by control panels to the right and left of the steering wheel, making the relevant information and the most important controls easy to see.

The company says the driver can benefit from this concept because only the information that he really needs is displayed and can be requested in his/her native language too. This avoids unnecessary distractions and allows the driver to fully focus on the ever-increasing volume of road traffic. The 12.3-­inch MultiViu Professional 12 TFT display is fully programmable and displays various combination instruments and information such as camera images.

While the speed, battery charge level or navigation is displayed during driving operation, the door cameras and other relevant information can be seen when the bus stops. When reversing or for panoramic camera systems, the display can be used as a monitor, making an extra screen superfluous. The warning lights only appear on the display if there are error messages, additionally pop-up messages can also be displayed to warn the driver of unusual or hazardous situations.

As in the previous models of the driver’s workplace, the system’s height and inclination can be completely adjusted, which Continental says translates to ergonomic working conditions for the bus driver.

Customisation through modular concept
Michael Glunk, program manager for the modular driver’s workplace, Continental said, “With our new concept, we’re opening a new chapter in the history of the driver’s workplace and we have placed people at the heart of all our deliberations. In terms of flexibility and customisation, the mDWP represents a major step forward for drivers, fleet operators and manufacturers.”

Continental says the modular design, manufacturers can freely arrange the control panels and displays, adapting the system to match the special requirements of their customers and to the future type of operation of the buses, without having to keep additional components in stock. The control panels are connected via CAN bus and are freely programmable. 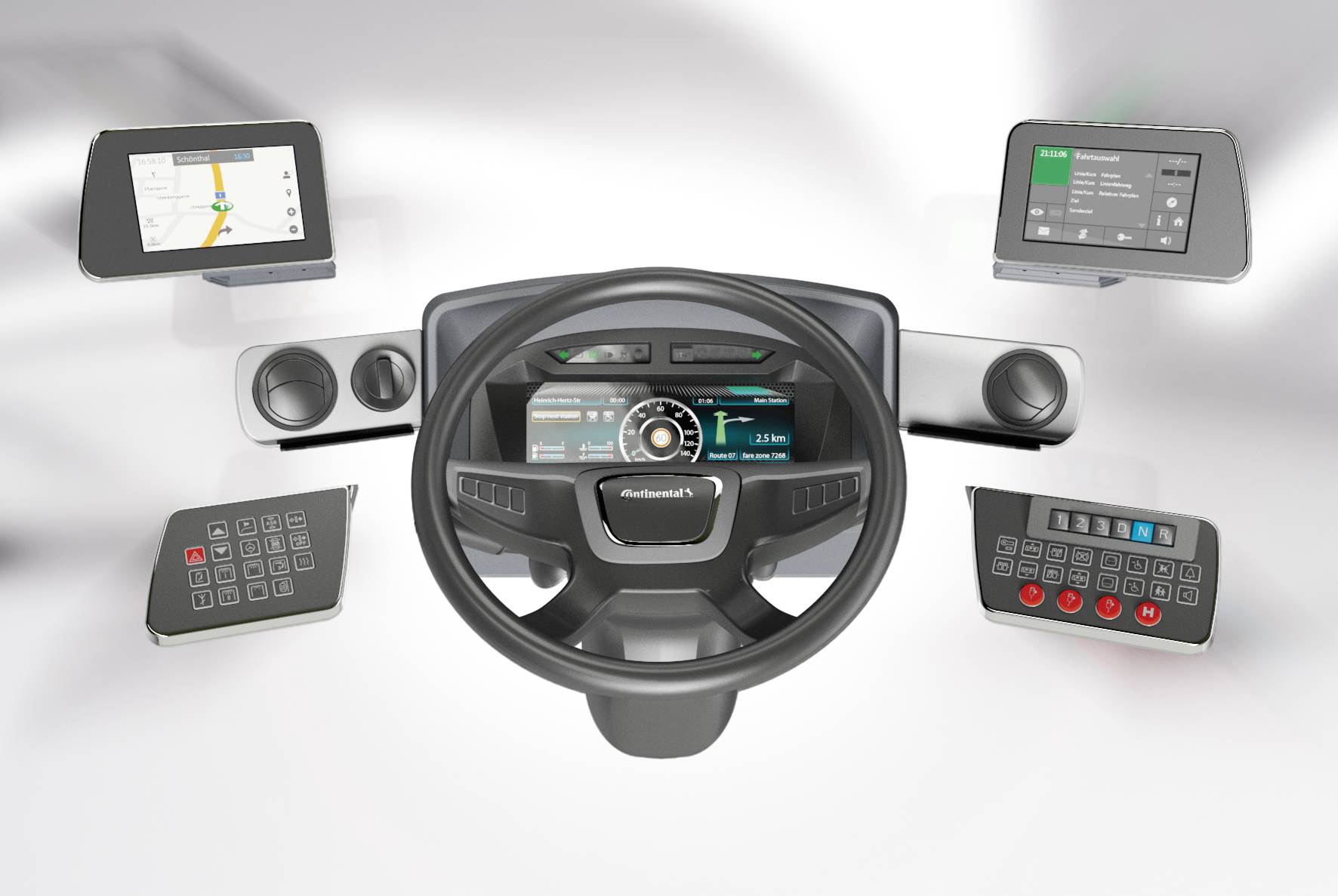 The modular driver’s workplace concept focuses on the driver’s needs and can also be adapted to match the required use, regardless of whether urban or intercity traffic is involved.

This makes the system universally usable. Despite this flexibility, the workplace still complies with the EBSF standard (the European Bus System of the Future) by the International Association of Public Transport UITP and meets VDV requirements (VDV = Association of German Transport Companies). “As a technology company, Continental is broadly positioned, so we are able to develop a comprehensive system from many different components and that offers great added value for the vehicle manufacturer,” said Dr Michael Ruf.

Flexibility to customise
As per Continental if additional switches, displays or additional devices are needed, two additional displays can be connected to the workplace, the OEM can individually program all the modules according to the demand of the customers and can also easily change from left-hand to right-hand drive. If the bus has to go on tour for another purpose, the control panels can easily be equipped with new icons and reprogrammed. This is an advantage that cannot easily be achieved with mechanical switches – and yet another benefit for fleet operators. 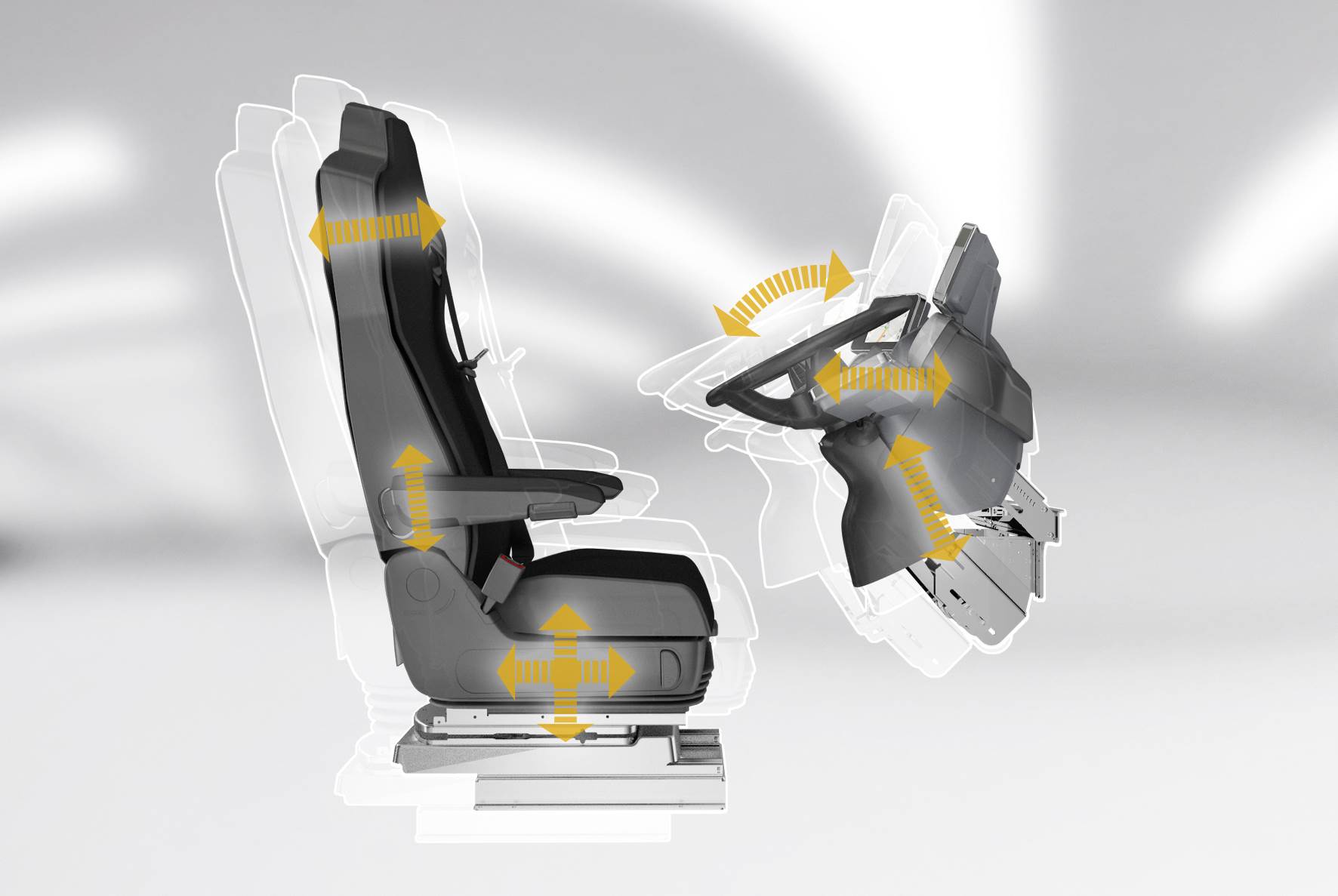 The modular driver’s workplace adapts to every driver.

No switch can be moved unintentionally
The component major, says that another advantage of the modular driver’s workplace: It has either a memory or a PowerOn function. The next time the engine is started up, for instance, switches and displays are at the same settings as when leaving the bus – or in a basic (home) position, even if a cleaning team has meanwhile wiped the modules. OEMs who want to offer their customers an additional design option can also immerse the switches and the background lighting of the modular driver’s workplace in a color-matching, ambient light.